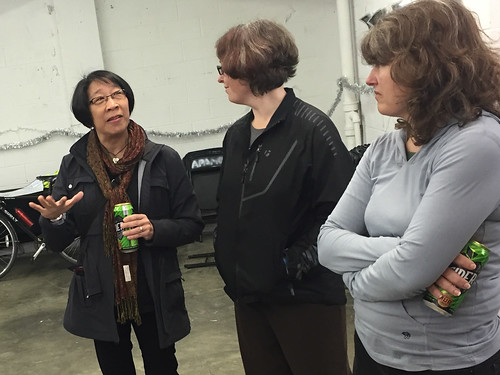 Our first Wonk Night of 2016 happened last night. Since the first one in 2012, we’ve held these events in the lobby of Lancaster Engineering (our sponsor) on Southwest 4th and Oak in downtown. It’s a great venue, but it was time to take the show on the road. We headed east and find a venue right on the corner of Southeast 82nd and Division — a community space managed by the nonprofit Asian Pacific American Network of Oregon (APANO) that also happens to be inside the most diverse census tract in the state of Oregon.

A project of APANO that we’re really excited about is the Jade District. This “neighborhood prosperity initiative” (backed by the Portland Development Commission) is aimed at building a vibrant community and economy made up of people who currently live in the area — 40 percent of which are people of color with “a rich blend of Asian influences.” A building block of bike-friendliness is a neighborhood that’s fun and inviting to ride in. The Jade District’s Night Market fits that bill perfectly. When it happened last year APANO transformed the auto-dominated expanse of roadway at 82nd and Division into a fantastic public space full of live music, vendors, and happy humans not inside cars.

We talked a lot about people last night. While Wonk Night is usually all about policies and projects, it was clear that in the Jade District you can’t talk about that stuff without putting people first. This is a place that has watched other parts of Portland gentrify and go through massive waves of displacement. In fact, many of the current residents are now facing a second wave of displacement as housing prices in inner neighborhoods skyrocket. We chose this location for our event because of all the projects and investments that are happening in the area. But before we could talk about those things, some of our guests last night made sure we talked about the people.

“When we’re talking about the what,” community activist Steph Routh reminded us, “we also have to talk about the who.”

Jade District Executive Director Todd Struble spoke about his group’s work to “build power” in the community so that people have the tools to push back against the forces of displacement and fight for safer streets. Vivian Satterfield, deputy director of OPAL Environmental Justice Oregon, reminded us that we were standing in an air-quality hot-spot and that the communities she works with breathe more toxic air than most Portlanders. 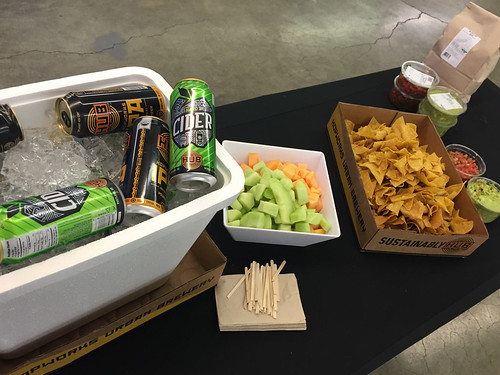 Nice spread! Thanks to Whole Foods and Hopworks. 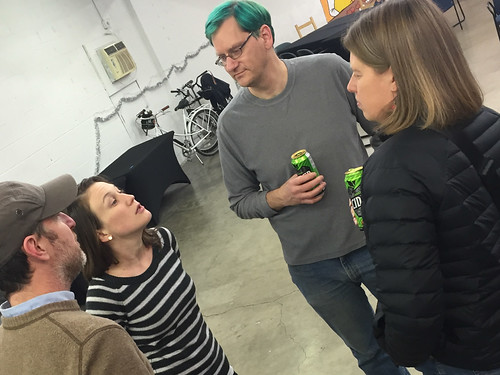 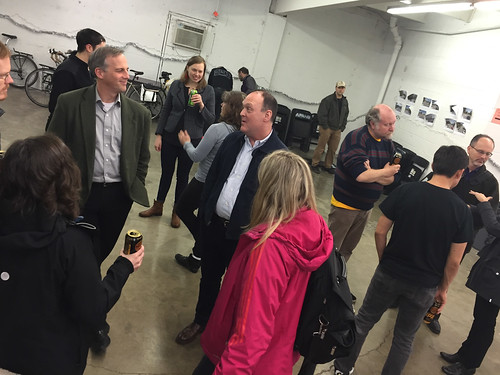 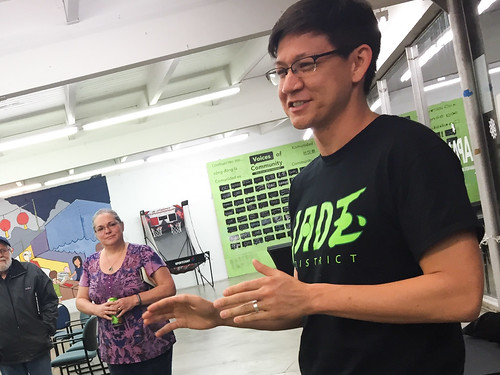 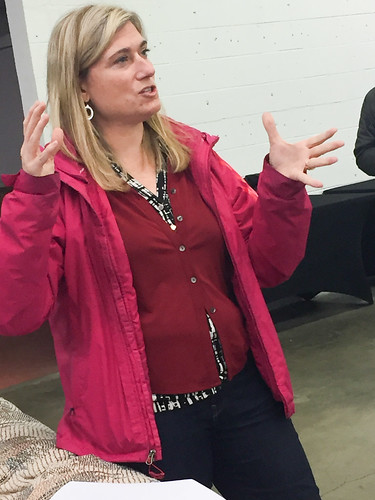 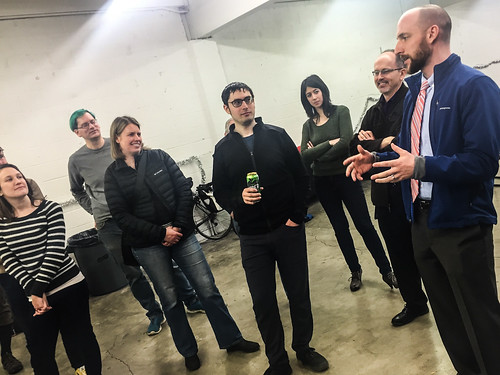 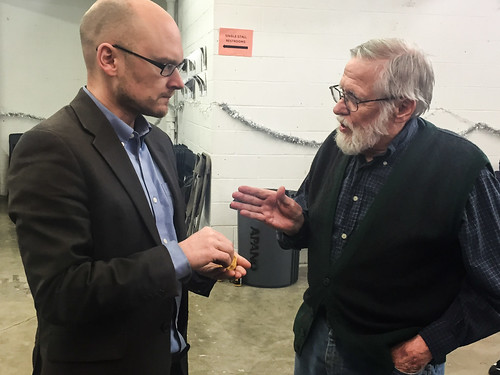 The two dozen or so people in the room shared their perspectives on riding in the area. Almost everyone said residential backstreets are the preferred routes. (You can’t blame them, given that this part of Portland is hemmed in on all sides by massive arterials with horrific crash statistics.) And while there are more through streets in the network out there than, say, hilly southwest Portland, there are not enough streets that make safe and direct connections wherever you want to go. Many streets either just stop or they run into an arterial.

Nearly everyone who spoke agreed: 82nd Avenue is a major barrier to safe transportation. The conversation wassn’t about bikeways on 82nd, it was about how to get across 82nd. One of our guests, who said he primarily drives in the area, was concerned that the Portland Public Schools re-districting process has changed boundaries without regard for how dangerous it is for students to get across 82nd. Another attendee, Scott Lieuellen, described what it’s like to come up to 82nd from a quiet sidestreet: “It’s like being on a nice forest path then coming to a raging river.”

The big elephant in the room was the project being planned by Metro to run an express bus service (they call it bus rapid transit) from downtown Portland to Gresham via Powell and Division. In the current alignment, 82nd would be where the route jogs north-south. Metro Project Manager Elizabeth Mros-O’Hara told us about the project and fielded questions. As we reported last month, Metro says bikeways on 82nd are not in their plans. While that debate isn’t over, our conversation last night was more about how Metro and the City of Portland will work together to create parallel facilities via neighborhood greenways. Bureau of Transportation Project Manager Zef Wagner shared more about the City’s plans for the 70s Neighborhood Greenway that will run north-south from the Rose City Golf Course to Southeast Flavel.

While parallel bikeways and better transit would be nice, some feel we shouldn’t give up hope that 82nd can someday be redesigned into a more people-friendly place. But before that can happen, the road would have to be transferred away from its current owner: the Oregon Department of Transportation. PBOT would like to take it over, but neither agency has been willing to cough up the money to make the exchange happen. What might hasten a transfer? ODOT Region 1 Planning Manager Jon Makler told the crowd last night that it takes a shared community vision. Politicians and agency staff might budge, he said, “If the community can speak with one voice about their plans for 82nd.” Makler added that that’s what happened prior to the inner section of Sandy Boulevard being passed from ODOT to PBOT several years ago.

That example caught the attention of Jade District director Todd Struble. “The difference with that Sandy example is, they all spoke English.”

Thank you to all of our guests and to our sponsors: Lancaster Engineering, Whole Foods Market, and Hopworks Urban Brewery.

ODOT is adamant about maintaining Level of Service on 82nd Avenue without actually using the term. They throw every excuse why they can’t get rid of travel lanes to prioritize people not in cars. They say it’s needed as a backup for I-205, or that drivers will just divert to 92nd. They create “intersection safety enhancements” that don’t improve safety or slow down motor traffic. Mid-block RRFBs will be useless on 82nd – no one will stop for them.

I’m honestly not convinced PBOT can fix 82nd either (just look at Burnside or 50th Avenue, for examples). 82nd will be a blight on our city for years to come unless we make some radical changes and I don’t see the city prioritizing that any time soon.

I’d love to be proven wrong.

Thanks for coming to the event Adam.

I wonder how the dynamic would change if all the groups represented at Wonk Night (and some others) sat down and came up with a “shared vision” for 82nd. Barring that vision being created and then fought for, I agree that nothing’s likely to change on 82nd for years to come.

Thanks for hosting! 82nd is a tricky beast. The people living in the area certainly want safer streets. But safer streets often increase property values and accelerate displacement. It’s a very sensitive area and APANO/Jade are doing a terrific job in representing the needs of the neighborhood. It seemed to me based on discussions last night, that there was a general consensus that the needs of the neighborhood must come first. A bottom-up approach to develop this shared vision would serve the area well.

I wish I could’ve made it. We cycled out for the first Night Market- there were a lot of bikes there. It’s a long ways for me (I’m near downtown) so I don’t get over there often.

Getting to 82nd (and much farther) is always a great reminder of the value of Portland’s diversity and of the huge costs of car-oriented design to the exclusion of all other modes.

Thanks for coming out to 82nd, BikePortland!

Has anyone ever looked at splitt5ing 2nd into couplets. 82nd south and 84th north between Stark and Clay and between Kelly and Raymond. This could open up a lot of commercial (and residential redevelopment) opportunity and simply traffic movements. Add signals every couple of blocks and you can set the speed limit and simplify crossing for peds and bikes. There would likely be room of bike lanes and transit lanes, too. Obviously, there are massive hurdles, but all of the proposals I have seen for simply dressing up 82nd seem really lame.

That planned 70’s route is nearly as horrible as the one that was purposed monster hill climb for 71st street.

76th/75th make the most sense, its flat, paved, lights for crossing Division and Stark already exist, closer to the 74th street Banfield overpass (which would extend it’s usefulness to NE residents as well, with a slight modification the ped crossing at 75th and Powell could accommodate bicycles and transition back *via modifications to the parking loops on Powell) to 76th or 78th. Perhaps even extend it to 72nd which if given some paint could get us lanes all the way to Harmony/Sunnyside road in Clackamas.

Considering more than 50% of the businesses on 82nd through this stretch are automobile related, and the street grid is fairly complete I see little reason to try to keep the 70s greenway within a block or two of 82nd.

though they should make it part of the code for new buildings with new setbacks which will preserve room for future bicycle lanes on 82nd.