On bikeways, paint matters when it’s all we’ve got

There are a lot of reasons why using only paint to separate bicycle operators from motor vehicle operators is problematic. Today I’ll share an example that speaks to the importance of maintenance.

On February 6th I rode on Northeast Multnomah through the Lloyd District. I don’t usually ride here but I wanted to check-in and see how one of Portland’s most important bikeways is holding up. I say most important, not because of the number of people who ride on it (it’s underused because the street has yet to fully transform into the residential/retail hub it will soon be); but because of its political and engineering context.

The Multnomah bikeway was created through a rare partnership between the City of Portland and business/real estate interests. And, as far as bikeway designs go in Portland, it’s one of the best we’ve got. It’s got more separation than the lanes on SW Stark and Oak, it’s longer than the parking-protected bikeway on Broadway near Portland State University, and it was a lot cheaper than the true “cycle tracks” on SW Moody, NE Cully, or SW Multnomah.

Because so much of Portland’s bikeway miles are created only with paint, upkeep and maintenance is critical. When paint and markings wear off, the bikeway literally vanishes. So for those of us who rely on them, paint is our infrastructure.

When I rolled through last week the bikeway had all but vansished on the block east of NE 7th. As a result of the “beeswax” yellow paint in the buffer zone wearing off almost completely, people parked right on top of the buffer zone — which is meant to provide separation of uses, not as a place to park cars.

Compare these two images above with how this project was initially sold to us by the city (sort of like those images in McDonald’s ads versus what the burgers actually look like):

If only.
(Graphic: PBOT)

As I rode east toward NE 9th (where a new grocery story is coming soon) the buffer paint looked a lot better. And lo and behold, people didn’t park on it (well, not as blatantly)!

The visibility of paint alone gives bicycle riders an extra
2-3 feet of breathing room in the foreground versus the background.

This seemed like an excellent (albeit non-scientific) example of why maintaining bikeway markings and paint is so important. Of course, all this could be avoided if we improved these unprotected bikeways with real, physical objects to separate them. But that’s a post for another day.

UPDATE: A source in the Lloyd District sent us a photo showing that PBOT has just added a new white stripe and bike lane character in this location (see below). Not sure if they were spurred by our February 6th Tweet or what, but it’s good to see this. Also good to hear PBOT is working with Go Lloyd organization on a more sustainable maintenance plan. We’ll keep you posted:

I had < a 5 day turnaround with faded bike lane paint with a call to 823-SAFE. I have a feeling that we should all call when we see this stuff.

The bike lane itself was just re-striped so it’s helping. We are working on it! Thanks for the nudge!

…and the time of year when painting/ thermoplastic is applied is also critical to the longevity of the service life.

The whatever color is likely paint, similar to that used on tennis courts. MMA is the current gold standard.

It would help if it wasn’t a valet parking zone. Lots of drivers park in the bike lane.

Yes! the white lines that the cars are parked on need Jersey barriers. They would protect the paint and the buffer with minimal cost.

…or if PBoT does not allow it how about a killer rabbit! 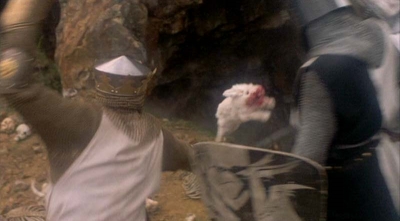 Tom Hardy – or, referencing a BP article from earlier this month, some traffic cone bombing! (It’s a little like yarn bombing, but more effective!!)

Jersey barriers take up 2 ft at the base. how would people in cars open the passenger door?

Last year, a few blocks up, cars, including police cars, were parked at the curb behind the planters. This was for the length of Holiday park.

It’s amazing that you only found bad parking on NE Multnomah. My recurring experience with the eastbound bike lane is that someone has completely and very deliberately blocked it between 7th & 9th, usually cop cars or a delivery. Between that and the left turn across NE 7th streetcar tracks I’ve just stopped using it.

You do realize the meaning of ‘police powers’ don’t you?

Police powers aren’t so unlimited and arbitrary. There’s a loading zone, center turn lane, and plenty of sidewalk to claim for urgent matters. Never mind that they’re just standing around.

You and the Portland Business Alliance have something in common: you both complain about a lack of consistent street maintenance by PBOT. The City has a nearly $1 BIllion maintenance backlog that the City gas tax, if passed, will barely make a dent in, so if the portion you are complaining about gets fixed, then some other portion of bike striping (elsewhere) will continue to be neglected.

This has a very simple solution: Allow towing companies to tow and impound any motor vehicle that is found parked in the buffer or the bike lane (the buffer should simply be made a part of the bike lane to simplify this). All the tow companies should need to do is provide a photo of the illegally parked vehicle and then it’s game on.

If this were implemented, I suspect it would take less than two weeks until no one dares park in a bike lane again.

Personally, I would find an alternate route before I would use a “trap you between the door and curb” lane like this. No thanks, not in our environment of total motorist entitlement.

Have you ridden this area before? I used to all the time, and in my experience, this part of the route is the worst, but not because of just the parked cars, but also due to the mixing zones. I’m hoping for a rebuild of the street that prioritizes transit and biking. Especially, as a rider of the #8 bus, I know that this area can be much better and safer for everyone.

I totally agree. I stopped using multnomah after the “improvements.” I hate the mixing zones, being “protected” from autos by planters is not effective. I felt like I was going to be right-hooked approaching every intersection.

I lived in this neighborhood for many years and saw the installation of this project as it went up.

I too am disappointed by the design. It’s too confusing to me, and I’m a transportation planning nerd. Although I’m tempted to get angry at drivers who abuse it, I also can’t help thinking most if them are oblivious they’re doing something wrong.

The thing I hate most is the bike lane keeps changing every block. It’s confusing and inconsistent. You wouldn’t gave a car lane change every block from parking to no parking to two lanes to one lane to zero lanes to….. Etc etc. Why is it acceptable in bike design?

Buffers are not defined in Oregon law.

This would certainly incentivize enforcement of illegal parking! I’m sure the city would never allow this, although tow companies regularly have deals with private property owners to tow off their lots. It’s far easier to remove a vehicle blocking nobody’s public right of way than it is to clear a public hazard. Ironic, huh?

How is parking on the 8″ white line a ‘public hazard’?

Hmmm, wonder what is wearing the paint off?

Could it be cars driving on it? Or was it weathering, or repaving?

This block has had multiple construction projects so this is actually much better than its been for a while. Not marking the bike lane is also dangerous for drivers who are leaving their cars and crossing the bike lane to get to the curb and sidewalk or are exiting the buildings and don’t realize they are crossing a lane of travel as they go to their car.

I think if you can’t have physical separation, a small rumble strip is a good compromise. You can feel when you drive over it, and that let’s you know you’re somewhere you’re not supposed to be straying in yr vehicle.

Some states still use those “Botts Dots” to remind sleepy drivers to stay in their lane. CA used them regularly until just recently. Using them to show where the bike lane is would help. A center of the street refuge in the crosswalks at Lloyd Center on Multnomah at stoplights would really help, along with enforcing the speed limit. Too many people treat that street like the straightaway at the Indy 500.

I rode the 70 bus to work during the snow and passed by the route of this “protected” Multnomah bike lane. When snow covers the road, these bike lanes turn into car turn lanes.

NE Multnomah is the most direct route for me to ride to work, and I absolutely hate it. If drivers aren’t actually parked in the bike lane, they’re using it as a loading zone or opening their doors without looking or crossing the lane to get to the mall without looking. And with curb on one side and parked cars on the other, I’m trapped there while the person sheepishly tries to get out of the way or, better yet, yells “Watch where you’re going @$$hole!” as I try to not crash into them. That’s before I get to the cars moving into the bike lane/right turn lane combo without looking because no one in their car-driving lives has ever had to check to see if a right turn lane is clear before this ridiculous setup appeared. Or cars coming from the other direction turning left right in front of me because I’m in what they think is a right turn lane, so they assume I’m going to make a right turn.

Once in a Blue Moon Halloween Bike Ride