Concept art for a new bike-and-ride facility at the Goose Hollow MAX station, due to open by the end of 2016.
(Images: TriMet)

At at least one of the facilities, there’s even room being set aside specifically for cargo bikes.

The Goose Hollow facility, pictured above, will include “about 50-60 bike parking spaces total, including both secure, enclosed facilities and covered bike parking spaces,” with construction starting later this year and finishing by the end of 2016. 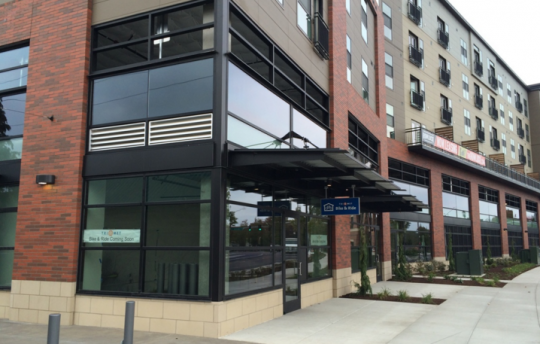 The Beaverton Creek MAX station just south of Nike’s headquarters, meanwhile, is getting the biggest upgrade of the three.

That project, too, is supposed to start and finish in 2016.

Storing a car for up to one day at a TriMet park & ride remains free.

If you’d like to influence the facilities or design of the Goose Hollow or Beaverton Creek areas, contact TriMet Active Transportation Planner Jeff Owen: owenj@trimet.org.

within 1 week people will be camping under these!

Probably won’t be any camping under the cover these facilities offer, because they’re secured by a fence and a card lock gate. Security from theft and vandalism, which comparatively speaking, cars have and bikes don’t, is what people are paying for, rather than simply to park their bike.

I wonder though, just how much people actually use these facilities. Beaverton Transit Center has one. Infrequently during the day, I walk by and peer in to see how many bikes are parked there. Don’t think I’ve ever seen it even as much as half full. In terms of design aesthetics, the facility is ok, but not great..standing away from it, it seems a bit dark.

Security from theft and vandalism, which comparatively speaking, cars have and bikes don’t, is what people are paying for, rather than simply to park their bike.

This is terrific news! TriMet has been teasing us for over a year with promises of a bike parking facility at Goose Hollow and they’re finally building it! Glad to see that some of the spots will be secure as well. This should greatly cut down on bike crowding on the MAX. Hopefully, it will be in before the summer crowding starts!

Now all we need is a protected bike lane couplet on Jefferson/Columbia so people can safely ride to the MAX station.

Yeah, really cool. And better connections to the westside is always a good thing.

I think many people who ride, just want to avoid riding uphill both directions through Washington park which is reasonable, but this seems like encouragement for not taking your bike on the MAX at all.

Of course I’m sure they are also trying to encourage more use of transit and by leaving a bike at only the stop needed too.

Seems like a better solution is more train cars during peak hours. That would benefit all riders crammed in currently.

Chris I
Reply to  fourknees

The steel bridge is basically at capacity. Options for adding trains are limited.

Hayden
Reply to  Chris I

True! Perhaps a round about to cycle more trains? TriMet has millions for free parking. How about a few no-seat MAX cars?

Steve B.
Reply to  Hayden

This is an important first step in getting secure 24/7 on demand bike parking on the west side in town.

Sorry still doesn’t change my behavior. Not risking the threat of theft, and the convenience of having the bike with me and the hassle of paying for the privilege.

The funding would be better spent on service expansion. I know that i

No difference for me. MAX is handy for going to the Zoo from either direction by cutting down on the climbing. I am not going to buy and lease space for 2-3 more bikes to get somewhere on MAX.
Time wise I find very little difference in time to and from home to where I am riding to if I ride or take MAX.
MAX just needs to use more cars in the peak commute times. At the same time they could cut down to single car trains in the wee hours. Now that would attract more riders that currently are driving cars.

Does TriMet do outreach to riders before they make decisions affecting bikes?

TriMet does ask riders and cyclists! Then they do something else to not help the cyclists. They regard the cyclist as a burdnsome competitor.

Where would the bike parking have gone without interfering with boarding/dispersing crowds after events at providence park or taking up expensive retail spots? The bike parking by the goose hollow stop will be placed on church land (assuming the partnership with the church on this project works out), presumably on one of the grass strips that might look pretty, but probably isn’t all that functional. It’s a third of a mile away, is it really such a big deal?

About time! I would have used this frequently (at least twice a week) when I lived in Portland. It was a lot faster for me to get downtown on my bike than the bus, so I usually did that. But from downtown I rode the MAX (and didn’t need a bike on the other end because my workplace was near the line), so at this point having my bike with me was just a hassle. And afternoon MAX trains were even more crowded, so I almost always ended up biking all the way home. Which I often enjoyed, but would have liked the option to not do EVERY day.

Short version: If I’d had the ability to safely park my bike downtown, near the PGE Park-Goose Hollow area, I’d gladly have done it.

Dear cyclists, does this make up for the substandard bridge crossing and the illegal swing gates and possibly the the zig zag crossings?

If you can make it though all the things we do to make cycling harder, here are some parking spots as a hunger games prize.

I doubt this will help much with the crowding on the train, but I can see Tri-Met using this as a pre-empt to banning bicycles during peak hours.