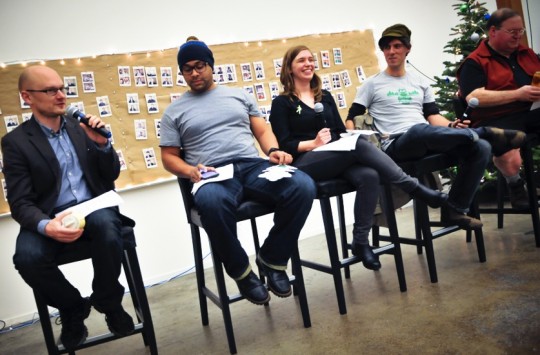 The BikePortland Podcast has returned with a vengeance.

It’s been several months since we last shared an episode. To make up for our hiatus, last week (with the help of some friends) we recorded a live episode at the headquarters of Simple in northwest Portland.

“Apple needs to be called out for sucking. They didn’t know the Tilikum Crossing was a thing until a few weeks ago.”
— William Henderson

Our Producer Lily Karabaic put together a solid show about the intersection of technology and transportation. It was moderated by our News Editor Michael Andersen who led a fantastic discussion with four special guests: William Henderson of Knock Software (makers of the Ride Report app); Noel Mickelberry from Oregon Walks; Mychal Tetteh from the Community Cycling Center; and Chris Smith, a technologist, blogger, and citizen activist who also happens to be on the Portland Planning Commission.

The first question they answerwed was: Which technology has done more for people who have a low-car life: Apple, Amazon, or Google?

Smith said Amazon because he uses it instead of going to the store. “But,” he added, “has that been a net VMT [vehicle miles traveled] benefit? That remains to be seen.”

In contrast, Henderson said Google should get the reward because they’ve done the most to make transit data available to the public. “And Apple needs to be called out for sucking,” he added, to a cheers and jeers from the live audience, “they didn’t know the Tilikum Crossing was a thing until a few weeks ago.”

Other topics included how city planners are using (or aren’t using) new forms of user-generated traffic data. With all smartphones essentially being beacons, Chris Smith shared, “We could have wireless pedestrian counters sitting at every corner giving us data about where curbs are needed most.”

And then there’s the tricky issue of the risk of “digital redlining” where the use of new tools leaves entire swaths of the population at the side of the road. Or the increasing use of datasets like Strava, which have a clear bias toward one type of user and activity.

Tetteh with the Community Cycling Center said he’s concerned that some technologies will lead to incorrect decisions about where transportation investments are needed. “For us to not focus our time, attention and resources where people have those challenges and bariers — where’s there huge opportunity for growth in ridership — it’s just not smart. It shouldn’t just tug at your hearstrings it should tug at our pocketbooks.”

When asked about their dream app, Noel Mickelberry from Oregon Walks had our current storm on her mind. “How about an app that will detect when leaves are blocking your storm drain and proactively unclog it,” she said with a smile.

Watch or listen below…

Glad that people are thinking critically about this. I am so tired of hearing career politicians with no idea about tech attempting to sound youthful and cool proclaiming everything can be solved with tech/data.

To me it just sounds like a bunch of out of touch old people praying they don’t loose their jobs. I don’t mean to be a jerk, young people fall into the same trap though not as often.

They just don’t see the implications: Like TriMet moving to ticketless and probably a cash-lite system. Or talk of replacing meters with demand based pricing. Or decimating the taxi industry and replacing with a system which requires users to have a smartphone and credit card. Or apps which track your every waking (and sleeping) move.

People are getting left behind and this is just the tip of the iceberg. The tech industry has sold us a bill of goods and it stinks.

I’ve long wondered why, given the tens of thousands of years of technological development, these days the term ‘technology’ is so often used to denote, of all things, computers.
Erstwhile Luddite

is chris smith checking his phone in the lead photo?

Only to answer important emails related to the advancement of sensible urban planning priorities.

I don’t think he’s on his phone. He’s looking at something in his other hand.

Amazon is destroying local businesses that people could be biking to and supporting, which is how I do literally all my shopping. It’s completely car normative to say that ordering everything online rather than “going to the store” is keeping cars off the road. Only if you’re a car driver, and only if you don’t care about your neighborhood stores.

I’d have to say google, for the maps and transit. Facebook recently offered its employees in the Bay Area $10,000 to live near the office, which is pretty awesome, it’s some incentive to not commute by car or tech bus. I wish Google did that, it might at least slow down the terrifying gentrification of San Francisco.

Great job on this! I’d like to see more discussion or text about House Bill 2621 (Unmanned Radar in Portland). Do we have an update on this bill or a good reason why the republicans voted against it? http://gov.oregonlive.com/bill/2015/HB2621/

Question from the podcast: What does it have to do with equity?

Smartphones and Google maps are great examples of technology, but technology includes any application of science / engineering for practical purposes, which actually includes bicycles and street infrastructure as well. Peter K might have good ideas on this.

Also, look at E.F. Schumacher and his writings about ‘appropriate technology’, esp. the book “Small is Beautiful”.