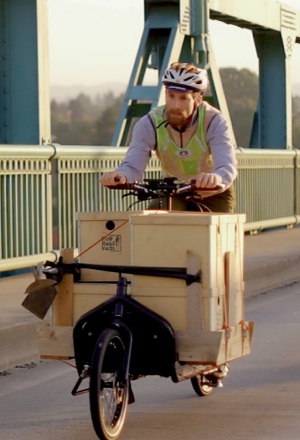 Josh Volk on a delivery, riding across the St. Johns Bridge.
(Image from a video by Ryan Creason)

Josh Volk runs Slow Hand Farm, a small community-supported agriculture (CSA) farm on Sauvie Island. The soil is great out there and it’s a nice place to grow veggies, but there’s just one problem: It’s about 15 miles from the nearest neighborhoods where his drop sites are. Josh could use a truck to make the deliveries; but instead, he uses a cargo bike.

Josh pedals the 15-18 mile from his farm plot on Sauvie Island into Portland’s neighborhoods. His pedal-powered deliveries recently landed him on the cover of Oregon Small Farm News.

Volk says he’s been doing all his CSA deliveries by bike since June thanks to a collaboration with Splendid Cycles in southeast Portland. Splendid is a cargo bike specialty shop and owners Joel and Barb Grover have established something of a niche in outfitting business owners.

Joel set up Josh’s rig — a Bullitt model made by Larry vs Harry — with electric assist. “He’s riding long miles, riding hard, and hauling equipment,” Joel says. “We may be biased but, I don’t think he could do what he does with any other cargo bike but the e-assist Bullitt.” One big advantage the Bullitt has over other cargo bikes is the very low center-of-gravity of the front bin. Joel says he’s sold a couple dozen Bullitt’s in the past few years and that it makes it “pretty easy” to ride 25-30 miles in and around Portland with 100 pound loads, “And have enough energy to accomplish the other things in your life.”

Josh will be delivering his harvests from Sauvie Island through December; but by April of next year he’ll be all set up with a new farm in Sherwood. “I still hope to use the bike as much as possible… It’s not more mileage, just more hills,” says Josh. With his new farm being four times the size, he’s eager to see if the bike delivery scales up. “I’ll have three more people working with me and I’ll have to see whether or they can start delivering by bike as well.”

The future of transport is human powered.

Awesome. The low center of gravity is a good point – I think of that every time I see an Xtra-cycle, which their very high centers of gravity.

Great point, I recently moved from a Bullit to a Big Dummy and it has a very different ride. Really miss the Bullit.

Bullits are brilliant machines as are longtails. Lucky for me, I have both a longtail and a front-cargo custom Metrofiets that I’ve added something of a wooden box to. 😉 Different loads call for different machines. Long things like ladders and 8′ and beyond lumber are best suited for the longtail. Heavy things like mulch, rocks, coffee, hardwood flooring, beer, wet opossums, gold bullion are best suited for the low center of gravity front loading bakfiets inspired machines.

That box of yours is an inspiration. Especially with the running lights. Running lights are definitely on my list of things to do, along with many plans for new box designs.

I notice he’s taking the lane on the SJB without complaining. It’s a lot nicer than the ride on 30, after all.

I saw this guy this morning when i was leaving Sauvie! I wondered what he was transporting. You rawk Mr. Volk! Good luck with your CSA!

Nice work Josh! Lovely to see you and Slow Hand Farm featured here. Our little family has gone car free and we are putting a LOT of miles on our bikes but not quite as many as you and certainly with less cargo.

Yes! Mr. Volk, kudos. I have seen you transporting down highway 30. The fact that you tackle both the highway and the St.John’s bridge inspires me, and I hope shows the city that we need better access on both these routes. Way to go, man!

Thanks for all the great comments. In regards to the St. Johns bridge, the sharrows (I think that’s what they’re called) that were put in this spring seem to make a huge difference, but also riding such a big bike and with the electric assist keeping my speed up in the mid teens. I haven’t had a single car or truck honk (yet, that I remember). I mostly try to ignore what’s happening behind me and just ride in a consistent straight line – in the middle of the lane to make it clear that it’s mine and I don’t want any one trying to squeeze around me. There is no question that it would be infinitely better if there was only one (wider) lane for trucks and cars and one for bikes. Having ridden and driven that bridge for many years now I can’t see how it would slow traffic, as long as the ends of the bridge near the lights turned into shared lanes (and on that topic they really need to change the lines on the St. Johns side of the bridge to split the right lane, not the left!) While I’m on a roll here, the main problem I see with the bridge is that no motor vehicle pays any attention to the 35mph speed limit (even with the police substation right at the end of the bridge, and it’s actually 25mph limit at the ends of the bridge). Most cars and trucks are driving 45-50.

For those of you who are afraid of highway 30, that is one of the biggest, safest bike lanes headed out of town (even though that’s not officially what it is as far as I know). There’s almost no cross traffic, and there’s plenty of space for bikes to pass each other or ride side by side. Some day I will invent a rolling sweeper to go in front of the bike though to help with all the debris. I’m not sure there’s anything that can be done about the traffic noise though.

Having those sharrows on the St. Johns Bridge deck has to make his haul infinitesimally easier.

You’re right in a sense, but even so I was really happy to see them go in. There’s no question in my mind that drivers respect them a lot more than the yellow “bikes on roadway” signs that they always seemed to ignore in the past. Still, a bike lane would be fantastic, and if we’re thinking about more cargo and more bike traffic we need to make bike lanes a little wider.

I was being sincere, not snarky. I’m a huge fan of those sharrows. I’ve been yelled at for riding on the St. Johns Bridge deck before they went in.

As for Highway 30, that wide shoulder is fantastic except when it’s filled with debris. There’s nothing quite like the thrill of biking over 20 mph and suddenly finding the path filled with gravel and having to merge into a lane that may or may not have a large truck travelling 45 mph.

Great re-purposing of a (former) category 2 road racer, too. All that suffering in the 1990s was worth it. Good on you Josh!

The suffering does seem a little more productive now that you mention it.