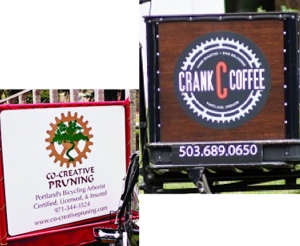 Recently I’ve learned about two more Portland businesses that have made bicycles an integral part of their business. Crank Roasting is a new coffee company and Co-Creative Pruning has been in business since 2010. I asked the owners of both businesses to share more about what they do and why they’ve decided to use bicycles.

“I have been involved in coffee roasting over the last 15 years. My love of riding and racing bikes goes back to my childhood – racing BMX through the late 70’s and 80’s and then in my mid 20’s I got into road cycling and racing. As my family and business became busier in my 30’s, I was finding it harder to ride consistently. I started dreaming about a way to be able to have bicycling be integral to my business.” 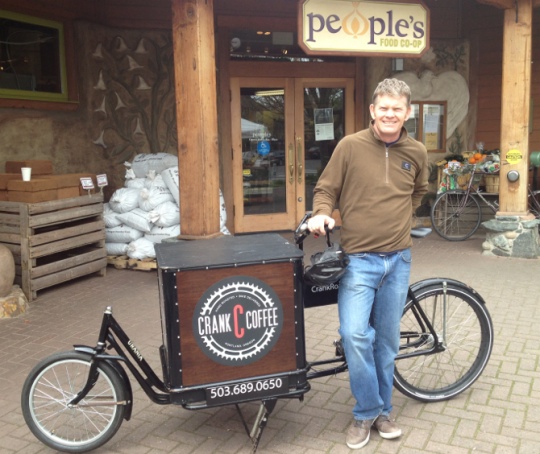 Love started roasting coffee as a hobby in 1998 and then opened Urban Grind Coffee House in northeast Portland in 2002. One year later he started roasting under the Mud River Coffee Roasting name. He moved the business to Sheridan, Oregon in 2005 and eventually sold it in 2008. By 2010 he was dreaming up “a business plan to combine coffee and cycling by having an all bike delivered roasting business.” In fall of 2012 he moved back to Portland to make that dream a reality. Love’s website, CrankRoasting.com, went live last month and he’s already got two wholesale accounts: Food Front in northwest Portland and Velo Cult Bike Shop and Tavern in Hollywood. Love says his plan is to sell whole been coffee direct to consumers and have wholesale accounts as well. 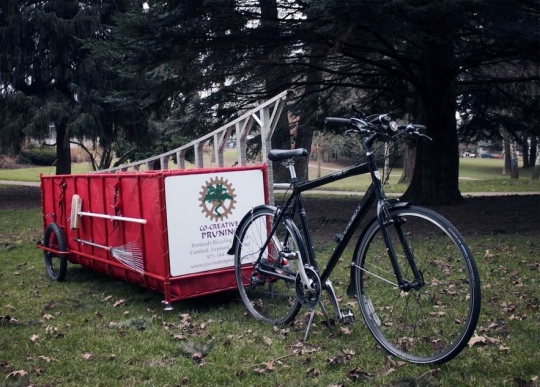 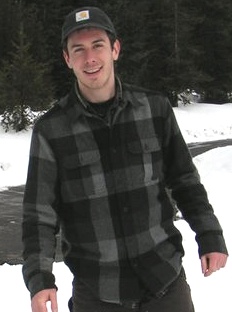 “For my first years in business I used a Bikes-At-Work 8 ft. flatbed cargo trailer to carry my 12 ft. orchard ladder, debris, and other tools. This January I upgraded to a custom railed trailer designed by Haulin’ Colin in Seattle. The extra dimension of height allows me to mount the ladder on the side and reserve the cargo area for branches. It has also allowed me to display my business logo and information, so that the amused and bemused looks I receive as I’m hauling two hundred pounds of apple tree branches are slowly being replaced by nods of recognition. The increased carrying capacity required an adjustment: in my first week operating with the new trailer I lost five pounds, but now the portion size of my lunch has caught up to the demands of the job.”

Leyrer, 28, grew up in Beaverton but has lived in Portland since 2003. He’s a Certified Arborist and has been operating Co-Creative Pruning since fall of 2010. He previously worked as an assistant to the head gardener Mark Rosenau at Concordia University in northeast Portland. Leyrer credits Rosenau, who also used bikes to do work around the college, for the inspiration to set up his business.

While Leyrer likes living in a community that supports bike-based businesses on their environmental merits, he says, “I must admit to operating by bicycle for mostly selfish reasons: sitting in cars makes me restless and driving them makes me anxious.” Leyrer has never had a driver’s license and says, “Portland’s investment in bicycling infrastructure allows me to live and operate a business in the city without resorting to a pick-up truck.” This year, Leyrer decided to calculate his savings in gas and maintenance from not driving a pickup and donate the amount to a local non-profit.

For Leyrer, the bicycle isn’t just a work vehicle; it’s “an introduction for my neighbors to how I feel about my profession.” “Gardening with goggles, earplugs, gloves, and power tools is like being a chef who isn’t allowed to taste the food,” he says. “So when I describe my business as bicycle-transported, I say ‘respecting your trees begins with the trip there,’ But it can’t end with it.”

Next time you need some fresh roasted coffee or tree pruning services, keep Cory and Adam in mind!

Indeed. What fun to meet these two folks.
And a treat to learn that a Haulin Colin trailer has made it down to Portland. I’ll keep my eyes open for that one. It looks like a serious piece of equipment.

“I must admit to operating by bicycle for mostly selfish reasons: sitting in cars makes me restless and driving them makes me anxious.” Leyrer has never had a driver’s license and says, “Portland’s investment in bicycling infrastructure allows me to live and operate a business in the city without resorting to a pick-up truck.” This year, Leyrer decided to calculate his savings in gas and maintenance from not driving a pickup and donate the amount to a local non-profit.

Great article, but this part was especially powerful. For all of the economic benefits we’ve derived from investing in an auto-dominated transportation system, this is a prime example of how we’ve inadvertently shut some people out of the economy by short-sighted, but well-intended decisions. The car is not the universal key to prosperity that its advocates make it out to be. It’s created, instead, a system of winners and losers. It’s really rewarding to see that Portland’s investments in cycling is creating winners!

Really enjoyed learning about 2 neat individuals. Given all the recent hullabaloo about journalism vs activism, etc, just curious if Cory or Adam provided anything, monetary or otherwise, to be the topic of this article? Not to take anything away from a well-written piece, it’s good to know what you are actually reading though.

Given all the recent hullabaloo about journalism vs activism, etc, just curious if Cory or Adam provided anything, monetary or otherwise, to be the topic of this article?

Mike. Absolutely not. I have a long history of covering local bike-based businesses. I do it for a lot of reasons: to help spread the word about their business, to inspire other people to use bicycles in their business, to document another part of Portland’s rich culture around bicycling, and so on.

Thanks for the question.

That’s what I figured! I thought I’d seen an article or two in the past that were clearly marked as promotional or advertising-ish but couldn’t be certain. Thanks for the response, hope I didn’t come off as accusatory really was just curious.

Some of our content is sponsored by a specific advertiser, like recurring columns (Ride Alongs) or special coverage like when I go to DC for the Bike Summit. But in those cases the sponsorship is obvious and transparent. It also has no editorial influence.

Also, back in 2009 we posted a video ad for a local business on the Front Page. They paid us to put the ad on the front page and we labeled it as such. Many readers liked the ad and the idea in general, but some didn’t and felt it was a slippery slope. In the end, Elly Blue (who was working with me at the time) and I discussed it and asked for visitor feedback and ultimately decided to not do them any more.

Hope that clears things up.

Jonathon, you are a paragon of civility when dealing with these questions and more. I’ve noticed many times; just thought I’d mention it.

“sitting in cars makes me restless and driving them makes me anxious.”

Well sure, if you’ve never had a driver’s license, it damn well should make you anxious. One reason that we have such levels of carnage on our roadways is that people driving don’t take seriously the level of danger inherent to the physics involved with that activity. Motor vehicle licensing isn’t just “the Man” harshing your mellow with more rules and fees, it’s needed because of the risks involved.

I don’t mean this to be a personal attack, Adam. Best wishes for your business. I applaud your efforts to do this type of work without a motor vehicle.

Thank you for the encouragement; good wishes are helpful for me to recall as I’m hauling uphill; I perceived no personal attack.

I can assure everyone that I wasn’t referring to occasions of rightfully-nerve-wracking illegal driving, and I think all cyclists would agree that motor vehicle instruction and licensing is important to us personally.

I obtained my learner’s permit at 15, spent a short time behind the wheel, and decided that the physics involved, as you note, are too far beyond the evolution of our spatial reasoning to be as therapeutic as bicycling. I have not driven a motor vehicle since that time. I’m pleased to live in a city with feasible alternatives.

Thanks for clearing that up. I am glad that you did receive some formal training and licensing. I also respect that you were able to decide for yourself that the risks and responsibilities were too great to pursue further. We are indeed fortunate to live in a community that allows one many options for personal mobility that do not involve private motor vehicles. Bikes are more fun than any sports car I’ve ever driven anyways!

“I must admit to operating by bicycle for mostly selfish reasons: sitting in cars makes me restless and driving them makes me anxious.”

Looking forward to checking out Crank Coffee this weekend at Food Front. Thanks to Cory for showing some love to the NW district.

Incidentally, that makes two bike-delivered coffee roasters up here – I see Trailhead pedaling up NW Raleigh on a regular basis. I love this town.

Rebecca
Looking forward to checking out Crank Coffee this weekend at Food Front. Thanks to Cory for showing some love to the NW district.
Incidentally, that makes two bike-delivered coffee roasters up here – I see Trailhead pedaling up NW Raleigh on a regular basis. I love this town.
Recommended 1

Don’t forget Courier Coffee. They were rolling before Trailhead and they do an excellent job. Joel is passionate about bringing superb coffee to the #pdx scene.

We have not made our first delivery to Food Front…getting through the red tape: look for us soon.

I am a fan of both Courier and Trailhead. Readers can also checkout Bicycle Coffee In the bay area.