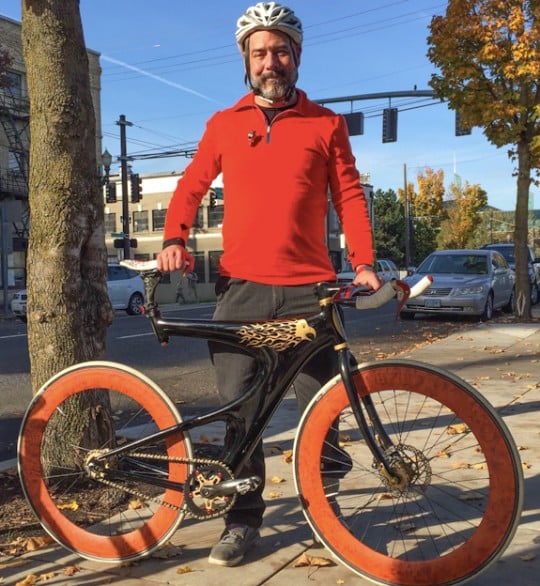 
“Some people customize cars to represent themselves, I customize bikes. Building bikes is my creative release.”

I caught up with him over coffee to see how he’s getting on five years after what he refers to as his “life change.” He arrived on his custom time trial bike, which he built from scratch during the fourth year of his recovery. (He wrote about the process of building the bike (PDF) as recovery therapy for the Brain Injury Alliance of Oregon.)

“So far today, two people have taken a picture of it,” Karl said when I complimented it, speaking with words that can be difficult to hear and understand — another lingering effect of his brain injury.

He’d been wanting to build a time trial bike since before the crash that changed his life, and for his fiftieth birthday, his family bought him the frame. He’d never built up a bike before, so each step of the build was a learning process – from lacing the wheels to installing the 2-speed “step back” hub.

He designed the logo himself, taking inspiration from vintage hot rods to create the gold eagle in flames design. Although he’d never built a bike before, Karl is a designer by trade (formery with Nike, he now works as a technical designer for Icebreaker), and he has done custom graphics for three of his bikes over the years. “They’re part of my personality,” he said. “Some people customize cars to represent themselves, I customize bikes. Building bikes is my creative release.”

Riding bikes has been a huge part of Karl’s recovery from his traumatic brain injury (TBI). As part of his recovery, he learned that the best activities to help with cognition were ballet, martial arts, and cycling. Cycling teaches your brain to multitask and make fast judgment calls, and helps with balance and perception. Since his life change he’s been on fifteen century rides around the area. “I call it spinning meditation,” he said.

While century rides may be his meditation, they’re only one of the many forms of cycling Karl does. “This year I’ve developed a new love,” he said. “Velodrome track racing. I was researching ways to get in better shape and improve, and velodrome racing was one of the top ways to do that.” When he read that it improves your balance, speed, and cadence, he decided to try it.

“I have a nickname at the track, they call me ‘Crash Karl.'”

He began attending beginner’s classes at the Alpenrose velodrome track. Because of his TBI, he initially had trouble adjusting to the fixed gear aspect of the track bike. He says it took about three or four months to get it right.

“I have a nickname at the track,” Karl said. “They call me ‘Crash Karl.'” He grinned, then pulled up his right pant leg to display a nasty section of mostly-healed road rash running the length of his shin. He was following an instructor up to the top of the track in one of the steep corner turns when his handlebars clipped the railing, sending him flying down the face of the track. 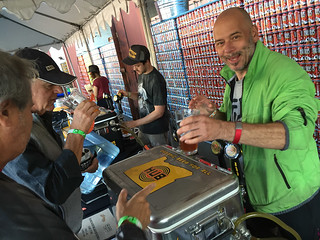 He’s been renting a track bike there to practice on, but this winter he’s planning a new bike build: a track bike. He’s bought the frame already, and will be once again be building it from the ground up, buying pieces as funds allow. He plans to have it finished by the beginning of next track racing season in April or May.

And, yes, he’s already designed a logo which combines his name with elements of the Swiss flag. (His grandparents were from Switzerland.) He’s also planning to use red and white spokes in his wheels.

Cycling is one of many therapies Karl uses to help himself recover from TBI. He does a series of exercises every day to help build coordination and cognition, such as this cerebellum exercise: while sitting, raise one foot and hold the same side hand over your knee. Now, circle the foot to the right, while circling the hand to the left. It’s surprisingly tough – he had me try it in the coffee shop.

Routine is hugely important for Karl when managing TBI. He’s developed tricks for most everything, from setting meeting alerts on his calendar at work, to making sure his cell phone and wallet are in the same pocket every time. He’s also used a therapy called neurofeedback at a local clinic to help retrain brain waves.

“I’m trying to take my experiences and help other people,” he said. That’s reflected in his motto, which he signs his emails with, and has posted by his door to read every time he leaves his house:

“Live and learn today as if it were your last, and tomorrow will be beautiful.”

Karl had a few people he wanted to send shout­outs to:

“To my boys: I love you so much. To OBRA: Thank you for all your support. To the track racers at Alpenrose: I’ll see you all next year!”

Awesome to get this update. Used to live directly across the street from Karl on Lincoln, and was continually impressed by his burly commute to Beaverton.

Thank You! Say hi to your family for me> HAPPY HOLIDAYS!
I miss the former ‘Hood’!

keep going Karl. Every day past that TBI is an opportunity to grow and improve. Good to see you’re out at the track.

Keep goin’ on that cool Y-foil you have there!

Good to hear. Unique bike, it’ll be easy to recognize around town.

Ted, Thank you, I know what you mean about a loss and hope all is getting better? I tell my TBI acquaintances that to get back or even close to what you had before; One must take ‘Baby Steps’ because one must learn how to craw before walking or even sprinting (Metaphorically). Cheers to you!

Karl- it’s all getting better. I literally did nothing the first month- not even poking on the computer, just sitting on the couch. The next six months I was cognitively impaired (mostly memory/word recall). I’m all better now, or at least I think so.

Sorry yours has been tougher.

I’ve never really been interested in NFL but I’ve followed that whole “situation” closely. And it’s also motivation to wear a MIPS-equipped helmet.

“My Longest Ride”
TODAY (6-29) I am celebrating my 6th years from the day I almost was killed because what I believe was that the 25 year old guy was text-driving and hit me head on while on my bike commute home. He dragged me underneath his car for 30 feet & NO citation or ticket to the driver!?!
One month in a Coma and when I woke up and thought after hearing what had happened = WTF!!!