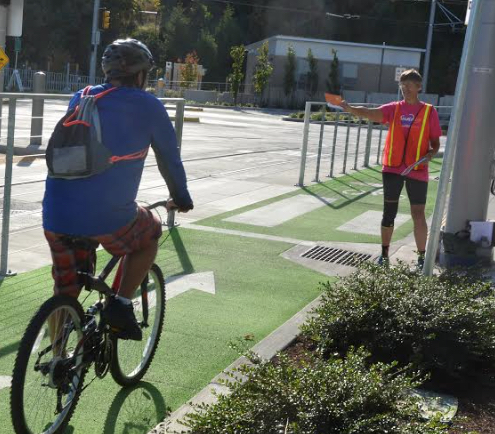 Metro volunteer Randi Wexler passes out a survey card at the west end of the Tilikum Bridge.
(Photo by M. Andersen/BikePortland)

Have you been wondering why someone shouted questions to you as you rode across the Tilikum Bridge today?


It’s all in the name of data. Metro’s bicycle planner Lake McTighe, Metro Intern Charlie Tso and several volunteers are camped out on the bridge all day today (from 7:00 am to 7:00 pm to be exact) to learn more about how this new crossing of the Willamette River is impacting bicycle travel behaviors. Metro has teamed up on the survey with PBOT, Portland State University, and TriMet.

McTighe said they jumped at the chance to survey Tilikum users as a way to help inform their ongoing work to accurately model bicycle travel. “We want to understand whether or not people are changing the way they travel based on this big investment,” McTighe shared with us during a phone call from atop the span today. 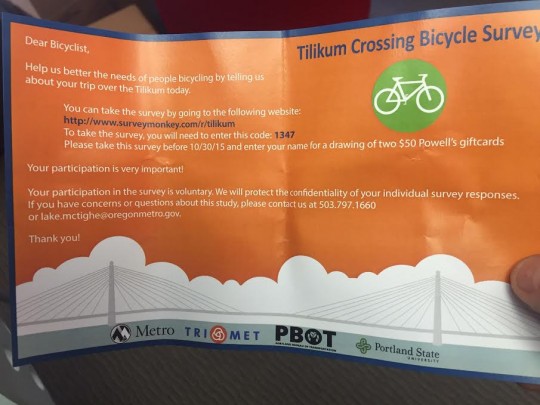 In addition to a survey card that links to an online questionnaire, Metro is doing “shout-out” surveys. McTighe said they heard about this method from Eugene where planners got a 90 percent response rate during a recent bike path survey.

McTighe says the survey has gone well so far and she’s confident they’ll get the 400 responses needed to make it statistically significant. And she’s getting a good laugh from some of the responses. When asked what bridge they used prior to Tilikum, one person shouted back to McTighe, “The Hawthorne is dead to me now.” “I would have had to swim,” another person replied.

Several of the riders McTighe has heard from today said they started biking specifically because of the Tilikum.

Metro plans to repeat this survey effort in six months and then in a year. Stay tuned for a final report where we’ll share the results. And make sure to grab a card when you pass by this afternoon. If you take the survey prior to October 30th you’ll be entered to win one of two $50 Powell’s Books giftcards.

Shouting may not be the best survey methodology.

I agree. When I went past a couple times early this morning, the shouter kept asking “yes or no,” but it sounded to me as though one word kept being emphasized more than the other. It came across as a little unintentionally loaded to me.

… but it is fun! And it’s a good way to get people’s attention so they’re ready to take the flier as they go by.

I stopped to ask “what?” and was given a card. The online survey allowed for a more well considered response than was possible rolling fast past the questioner. Bottom line: bridge is nice, but approaches are dreadful.

I would like to take the survey but didn’t have time to grab a card today. I didn’t stop because I didn’t have much time and I thought that I would need to complete the survey where the shout-out-er was standing.
The survey link requires a unique 4 digit code.

I shouted my answers, took a card, and entered my extended answers online. I hope they got enough of us to get a good set of numbers!

They should have stood over by the Clinton/11th/12th approach on the eastside. At those crossings, bikes are standing still long enough to take like five surveys.

What’s the 4 digit code for occasional weekend users? Pick a number above 8000?

I took the Hawthorne, and will continue to do so. Though the Tilikum isn beautiful, and I love what it does for my occasional bus commute, it’s not really a bike bridge. It’s really a mass transit bridge: it was designed with that in mind, and it performs its transit functions beautifully well. It’s side functions as a bike bridge leave a lot to be desired. The approaches on the East side are muddled beyond belief (the Clinton/11th/12th/Division section takes FOREVER to navigate, due to its many red lights and train crossings), and the West side pops one out in an isolated spot, unless the destination is OHSU. I’ve ridden over it on bus and bike several times. It certainly won’t replace my Hawthorne commute.

Actually, it’s a really easy transition from the bridge to Moody up to Harbor Way and then the path along the Willamette. Great almost entirely separated bikeway for commuting into downtown anywhere north of Salmon. Not such a great connection to PSU, though.

Well, I work at PSU part of the time, so that’s part of my reasoning. The rest of the time I’m commuting to Broadway and Salmon and find it much longer to do the trip from the Tilikum than from the Hawthorne. From the Tilikum, there are lots of red lights and other places to get slowed down, before even reaching the point at which the Hawthorne drops me off, and then I have a whole other set of lights and traffic spots to deal with. Separation is not as important to me as efficiency, especially considering that, considering the number of intersections with auto traffic, sharp corners, rail tracks, slick plastic “traction” pads at intersections, and homeless people, there are a number of objective dangers along the Moody/Harbor Way/Waterfront Park route anyway. So, for *me*, it’s not any safer, but a lot slower and longer.

It really isn’t all about OHSU. I use the Tilikum to get from NE to a volunteer shift further south and I see a lot of other people crossing the bridge and then heading in the same direction along the river trail.
Since I’m coming from the north I haven’t experienced the difficulties of navigating onto the bridge which sounds pretty bad. Access from the Esplanade/Water Ave is nice and easy.

It boggles the mind that such a methodology could be thought to bring in useful data. Add in the fact that it was imported from Eugene, and I have to wonder if the patients have taken over the asylum. You remember Eugene, the city that has lost 40% of its cyclists since 2009, don’t you? Sure, PDX spent most of those years stagnating, but the crew in Eugene makes flat-lining look live.

As of this afternoon 360 people have responded to the online survey, which is great! If you took a survey card, please take the time to respond. Metro is hoping for 400 responses. The data from the online survey coupled with the TriMet bridge bicycle counts will be used to refine regional bicycle modeling tools as well as tell us more about how people’s travel patterns have changed due to the bridge. (FYI the unique ID numbers on the cards are used to connect survey responses to time and direction of travel.) Additionally, there were 1,609 responses to the shout out questions and gender was recorded for 1,028 of the cyclists. Thank you to everyone who participated in the survey, the more data we have the better we can implement projects for better bicycling. Lake McTighe, Transportation Planner, Metro