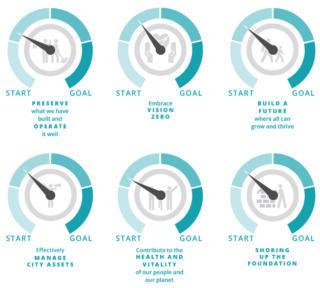 Last week at the Ann Niles Transportation Lecture, Los Angeles Transportation Director Seleta Reynolds said the overwhelming majority of her job is good management, not the clever policymaking that everybody usually wants to talk about.

Here at BikePortland, we’re guilty of talking a lot about clever (or not so clever) policymaking. But this year, the Portland Bureau of Transportation is also going through some operational changes that are worth knowing about.

Under Director Leah Treat, PBOT is working to be more precise and public about the status of its many projects. And a new tool on its website looks a lot like a gimmick but is actually a pretty good new way to keep track of everything the city is up to.

The tool is called the Portland Progress Dashboard. You can see a screenshot above.

By themselves, these dials are not very useful. But there’s a lot going on behind this scene.

To learn more, I clicked on a dial that’s close to my heart: “Build a future where we can all grow and thrive.” It leads to a page explaining the little goals that have been grouped into this big goal: 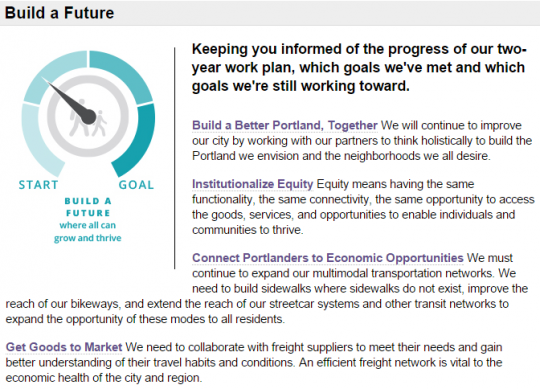 Still not very specific. But click on one of those subject areas and you get something much more useful:

Identify pre-requisites for PBOT to accept jurisdiction and responsibility for state highways and transition to urban arterials. Include estimated capital costs to bring up to City Standard and ongoing maintenance costs. Based on findings, prioritize list of transfers. Work with ODOT and State Legislature to identify funding to upgrade facilities prior to transfer.

Implement enhanced wayfinding and communication to increase the usefulness of neighborhood greenway connectors in improving access to nearby business districts. Explore smart phone app marketed to residents and visitors to assist in wayfinding. Build partnerships with small businesses to shape and implement.

In 2015, complete the loop system for Portland Streetcar to support innercity short transit trips and encourage and support redevelopment and land use goals.

Expand the streetcar fleet by one more vehicle in 2015 to achieve service targets for performance and schedule.

Strengthen analysis and documentation of Portland Streetcar’s impact on economic development by validating and monitoring measures over time and establishing formal reanalysis and new research opportunities.

Aha! There are a bunch of things the city is working on that I wasn’t aware of. The ratings range from 0 (not yet initiated) to 4 (completed) and their values, added up and averaged, are what influence the less-useful “dials” on the main dashboard site. There’s also a helpful chart on each page, showing PBOT’s relative progress on each sub-goal: 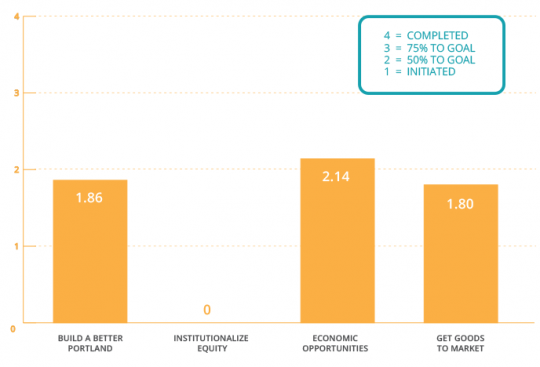 Uh-oh! Kudos to PBOT for setting explicit goals around equity, presumably to be spearheaded by new equity and inclusion manager Zan Gibbs. Looks like she’s got her work cut out.

This sort of public tracking of everything an organization does requires significant effort. But we pay PBOT $326 million a year to do all this — it only makes sense that some of that money go toward understanding what we’re getting for it.

Fascinating! Thanks for digging this up.

Awesome, we’re a third done with everything!!

Ok, reigning in my skepticism and negativity… I really do like this presentation, especially for the clear laying out of goals.

I expect it to be as effective as the PDX Reporter smartphone app.

I love hearing about a policy maker who prioritizes “good management” over “clever policymaking”. One big annoyance for me is that policymakers and activists seem perpetually focused on the “next big thing” rather than focusing on making the current things work.

I’d put Vision Zero as “0” in terms of anything meaningful done. I mean, I walk to work, and there are cars doing 45 in 25 residential and otherwise streets. I’ve had to run to avoid getting hit, or yell out to a car that wasn’t looking for a pedestrian.

Maybe it is like those (nonlinear) gas tank gauges, where the time it talks to use up the second half goes much quicker than the first half?

Just the other way ’round here.

Just 30 minutes ago I was at a marked crosswalk and a giant pickup sped through, and I had to step back. They were smoking weed too.