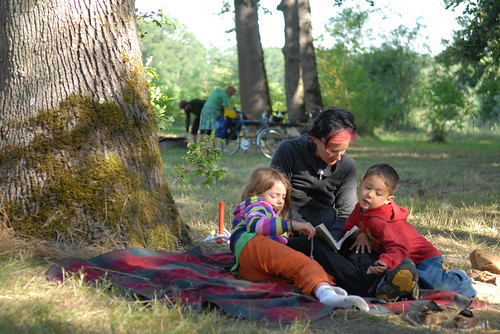 It’s fun to report two separate bits of news about bike friendliness in the state park system on the same afternoon.

Here’s more from the state:

A hiker/biker site is a camping area for people that are traveling by bicycle or foot without a support vehicle. Cyclists can set their tents anywhere in the area, and share communal picnic tables and fire pits. Reservations are not accepted or needed.

The Bullards and Milo McIver hiker/biker sites were re-located to better spots. Solar powered phone charging stations and fix-it stations were added in the move. The Champoeg fix-it station is located in the main campground so all park visitors have easy access to it. Fix-it stations have a bike stand, basic bike tools and a floor pump.

Milo McIver State Park is just outside of Estacada and adjacent to the Cascading Rivers Scenic Bikeway. Champoeg State Heritage Area is 30 miles north of Salem and the northern terminus of the Willamette Valley Scenic Bikeway. Bullards Beach State Park is located on the southern Oregon coast near Bandon just off of U.S. 101.

The fact that two state parks within a day’s ride of Portland and one that’s far from Portland are all prioritizing this is a testimony to the work of nonprofits like Cycle Wild and Cycle Oregon to promote and support bike touring and of quasigovernmental agencies like Travel Oregon that have brought huge statewide attention to the trend toward bike-based tourism. Also, of course, to a state parks department that’s perceptive enough to know where to find potential patrons: in saddles.

They should also make that “hike in” area at Stub Stewart a legit hiker/biker area. If you “hiked” from the parking lot with a cart provided by the park so you can haul 100 lbs. of gear from your car to a camp site, I’m sorry but that’s not hiking. I rode out one night with friends after work and some woman had brought several giant bird cages out with her. Big parrots and similar birds. Very bizarre. Very annoying.

I’ve been out there with buddies quite a few times and it’s almost always full when the weather is nice. There are only ever a few bikers but that parking lot by the entrance is always packed and you’re lucky if any spot is open. Super weak.

I do want to say that I love Oregon State Parks. My lady and I just did a week in Washington and the parks were all really pretty and everything but they mostly didn’t have a cheap hiker/biker rate. And the showers are all token operated. One place it was a minute and a half for a token (50 cents). It was upsetting to pay the same price as the RV folks, us in a 2 person tent, using no electricity, not much water and leaving almost zero garbage in their dumpsters.

Yep. Oregon’s State Parks are the best ones I’ve seen after touring both the East and West coasts of the US by bike. Cheap rates, free hot showers… It’s great.

They really do need to charge more for large vehicles and hookup sites. A group of 4 cyclists will pay almost as much as a family of 6 sharing a 40ft RV at a hookup site.

On our tour of the Oregon coast a few years ago, our family of 2 adults and 3 children sometimes had to pay MORE to use the hiker/biker campsites than we paid to use one of the regular sites. The interpretation of the fees by the park personnel at the entry gate sometimes got us a bargain. (Some ignored the kids since they didn’t have their own bikes.)

Camping fees for bicyclists in Oregon are expensive relative to some other state parks and a bargain relative to others.

Here’s an idea: a bike sharing system that enables anyone to securely place their own bike in a bike rental rack.

Individuals could supply and maintain their own bikes. GPS bike trackers can provide live tracking of each rental bike.

Unlike Spinlister, bikes can be located near high-traffic transit locations, rather than the owner’s residence. Unlike bike sharing programs, costs and rental rates could be cheaper.

YAY! and we can all git hit by cars on the way out there. Wooohooo.

I can attest to the improvements at Milo McIver, my wife and I rode out there a few weekends ago, the campground was packed, we were all alone in the new hiker biker. Way better than it used to be!

I did my first solo, self-supported, multi-day trip last weekend on the Tualatin Valley Scenic Bikeway. Home/NoPo to Hillsboro, Forest Grove, Banks, Stub Stewart; layover and explore 1 day; Banks to Vernonia, Scappoose to home. 165 miles. In the spirit of stimulating the economy on Oregon Scenic bikeways, I spread love along the way.

Awesome that there are two more routes like this that I can take from Portland with this support available at campsites.

So far I insist to make the entire trip by bike, but I really want to take the McKenzie River Bikeway (Amtrak to Albany to Sisters via McKenzie Bikeway, Sisters to Salem and Amtrak home). I hope to find a group doing something like that next year. I have no idea how those roads/highways are for biking.

I have ridden to and stayed at all three of these state parks in the last week and a half. The improvements are in place at Milo and Champoeg and are awesome! At Milo Mciver there is a solar panel which charges a stack of storage units which have usb chargers inside them.Champoeg also has the storage/charger units but i dont know if they are solar powered. Only $5 a night at Milo,and Champoeg, which includes showers which is a real luxury when your touring. Stub is a dfferent story, no showers, no chargers, $11 a night, and like someone said earlier it is much more accessible by car, but there are also more spots so I dont know if it would be an issue. Stub is beautiful though dont get me wrong and the Banks Vernonia is a pretty awesome ride.

This ride will begin at the ride leader’s home with a free breakfast and coffee. Fun for all!

Moving the H/B site at Bullards is a welcome change. I ride down the coast every year, often twice (although this year I’m not taking that route). The H/B site felt and sounded like it was in the middle of an industrial zone, complete with bright lights all night. It was like they didn’t want us there, a feeling that was reinforced by the campground hosts.

It was so bad that last year, when my spouse came with me on a tandem, we chose to skip that stop altogether and headed to a cheap hotel on the beach on the south end of Crescent City. In fairness, we might have done that anyway since we prefer to get past the narrow stuff that lies between Crescent City and Patrick’s Point before sunrise. (Modern lights are absolutely wonderful!)

Yeah, I remember that h/b site from my coat tour in 2006. The beach itself was nice, but I heard the beep-beep-beep of vehicles backing up all night long. Not the most pleasant experience!

I also remember the sounds of the trash compactor next to the h/b at Nehalem Bay.

Oh, someone just posted this on Cyclewild. Those with eBikes or objects with other standard plugs will need to bring an adapter: “Couple heads up for those of you thinking of doing a Milo McIver or Champoeg trip – the Hiker/Biker site has lockers with power for USB and Cigarette attachments but no Electrical Plug in so bring something similar to this if you want to use electrical appliances.”