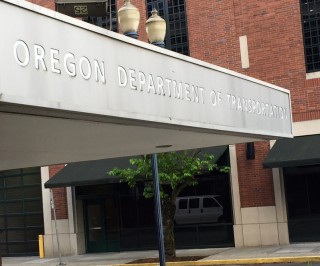 The advocacy group BikeLoudPDX plans to follow Monday’s safety demonstration on Powell Boulevard by taking on what it sees as the underlying issue: city roads managed by the state’s transportation agency.

At 4 p.m. the volunteer-driven organization plans to host a “die-in” at the Oregon Department of Transportation headquarters, 123 NW Flanders St., complete with fake blood.

Here’s the group’s description of its agenda:

We believe ODOT, with its focus on auto capacity and transport between cities, is the wrong agency to control arterials within cities.

ODOT has consistently prioritized auto capacity over lives. This is why 26th Ave. does not have a left-turn signal at Powell, which would have prevented this accident. In the past, ODOT refused to put in a left-turn signal because it would slow down cars on Powell. How many limbs and lives does it take to be worth a few seconds or minutes?

The problems on Powell are not isolated to the area around 26th. Indeed, Powell is more neglected and deadly in East Portland. There are no sidewalks on Powell in the vast majority of its length past I-205. Marked crosswalks are few and far between.

This is why are calling on the state legislature to pass a bill to transfer Powell and the other urban state highways in Portland to the control of the City of Portland. We are also calling on ODOT to prioritize funding to bring Powell and the other urban state highways up to standards minimally sufficient for city life (sidewalks and crosswalks would be a good start). The City’s Bureau of Transportation, though not perfect, is at least more directly responsive to local safety concerns than ODOT.

“ODOT has funded about $200 million of highway ‘improvements’ in the Metro suburban region over the past few years… but meanwhile…in the urban core, people die.”
— Terry Dublinski-Milton

This isn’t a unusual position in itself; in fact, it’s one that’s been endorsed by ODOT itself in the form of a bill now in Salem that would create a process for what’s known as “jurisdictional transfer” of the state’s urban highways.

The sticking point has been that the City of Portland, like other cities, has refused to accept the roads unless ODOT either brings their sidewalks, curbs and crossings up to urban standards or hands the city a large share of the money required to do so.

Last year, Mayor Charlie Hales described the problem as being like two people at a restaurant, pushing the check back and forth at one another.

This year, the city and other agencies have proposed a one-cent-per-gallon gas tax to pay for such upgrades and make jurisdictional transfers possible. But that bill is being blocked by Republicans in the state House.

Faced with that impasse, BikeLoud volunteers Soren Impey and Terry Dublinski-Milton wrote in emails Tuesday, ODOT should be doing more than it is to make roads like Southwest Barbur, 82nd Avenue and Southeast Powell safer.

“ODOT has also been reluctant to implement inexpensive safety changes, such as, speed reduction and lane configuration during re-striping,” Impey said.

“ODOT has funded about $200 million of highway ‘improvements’ in the Metro suburban region over the past few years,” Dublinski-Milton added. “$45 million for the Helvetia interchange alone, then there is the new highway to relieve congestion in Clackamas County connecting I-205 to 122nd. This has direct ‘economic benefit to industry so it is needed,’ but meanwhile…in the urban core, people die.”

BikeLoud is asking participants to “bring a white shirt that you are willing to have stains on if you are able; we will bring fake blood!”

Correction 12:50 pm: A previous version of this story incorrectly implied that Marine Drive is an ODOT facility. It’s managed by the City of Portland. The city is applying for state funds to improve traffic safety there.

“But that bill is being blocked by Republicans in the state House.” This points to a significant bottleneck: the political and legal barriers to investing in a smarter and more balanced transportation system at the State level. Part of the solution is building a big, broad statewide constituency for safe, active transportation. That’s how the statewide focus of the BTA aligns nicely with the critical grass roots organizing of groups like BikeLoudPDX.

It’s my understanding that the BTA has not only pulled back from ‘statewide advocacy’ to ‘Metro area advocacy’, but they have also decided not to support specific measures and focus on ‘the big picture’. Here’s your big picture, one more life changing injury. Nothing on their site, nothing on their blog, no one listening. Sadly believable.

This is true of BTA. But it’s Los true of many groups headquartered in Portland. If it doesn’t happen there or affect Portland somehow then it’s a non-issue.

Thanks for the write-up, Michael. The “die in” is kid-friendly and the fake blood uses washable kid paint.

Well, just like the Republicans in congress who want to starve Amtrak of funding*, it all comes down to self-interest. Urban areas don’t vote Republican for the most part, so they don’t care what happens to the roads in Portland. It’s cynical, shameless, and utterly unsurprising.

*They do this two ways: by cutting the Amtrak budget overall, and by forcing Amtrak to maintain routes in rural areas where there are few passengers and no way to run trains at even close to break-even point.

This was my experience while driving towards downtown Portland this morning…it’s a far more common experience along SE Powell, than most would realize: https://www.youtube.com/watch?v=AOvKSR08BxU

Wow! Thanks for posting that GB. That certainly isn’t my favorite stretch of road to drive.

What type of dash cam setup do you have? Very interesting set up. I thought that this would be good to have in all vehicles.

Chris I
Reply to  GB

I saw that this morning; a big concrete island is now in the middle of B-H just west of Western.

A year or so ago, the signal at 42nd/43rd and Powell, which is normally a sensor triggered light, was temporarily changed to a timed light. It was a transformative several weeks.

Many times you could catch the light as you approached the intersection, almost as if traffic on 42nd/43rd was to be expected! Almost as if people on foot and on bikes are just as important as people in cars!

People unfamiliar or not trusting the sensors, no longer felt that they needed to use the ped signal to trigger the light (or worse, get so frustrated that they would simply run the light).

(It’s pretty much impossible to not trigger the light when you’re in a car. You have to be very accurate in your wheel placement to trigger it on a bike.)

This intersection is a major intersection for people on foot and people on bikes. As it is, it is a perfect reflection on how ODOT views people not in cars. In a car? Make way! You are the priority! On foot, on a bike? Wait a few minutes, we’ll be with you in a while.

PBOT/TriMet has bike-triggered signals that don’t require perfect wheel placement. They’re on the path along the Orange Line near Division and painted green. These bike detector loops should be installed in more places.

For those coming from work or going to work, is it feasible to participate in this without getting all bloody?

I would think so, as they offered to scrap the idea when I wondered what how it would affect my kids. Nice group of people.

They are working hard today leading up to the event so are probably not monitoring comments here. Go ask on the Facebook event page (it’s the first link in the story in case my link doesn’t work) and you’re more likely to get an answer.

Try to arrive as early as you can. Many of us are taking off early from work to get there at 4.

Result of taking off early – caustic “get a job” comment.

This is a much better protest idea, IMHO. Hope that ODOT does undertake
some reasonable measures to prevent collisions.