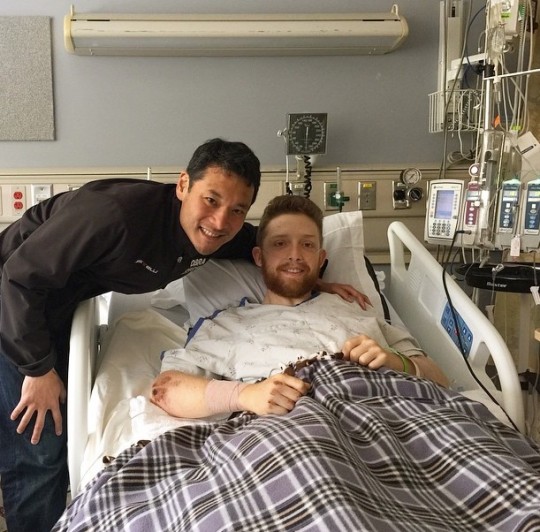 It’s been only three days since Alistair Corkett experienced a life-changing event. He was cycling on Southeast 26th Ave when he was involved in a collision that resulted in the loss of his leg. A budding bike racer, Corkett now faces a long road to recovery and a mountain of medical bills.

Here’s a quick update of how Corkett is doing and how the community is responding to this tragic incident:

— In just two days Corkett’s fundraising campaign on GoFundMe.com has shot up to $63,894 thanks to donations from over 1,100 people. The fundraising goal is $100,000 to help with medical bills and get him back to school to complete his degree. An update shared on the campaign page says he underwent a second successful surgery yesterday that was aimed at prepping his leg for a prosthetic.

— Kenji Sugahara, executive director of the Oregon Bicycle Racing Association, visited Corkett in the hospital yesterday. Sugahara posted the image above on Facebook and said that Corkett is smiling, positive, and already thinking about bike racing despite the circumstances. “He’s a strong guy,” Sugarhara shared with me this morning, “It’s going to be a long recovery process but it’s great seeing the community support.”

“He is planning to finish the season on his bike… nothing can keep that boy down!”
— Julia Corkett, Alistair’s mom

— Corkett has seen an outpouring of support from family, his co-workers at Bike Gallery and his Monster Media teammates. When I chatted with his mom Julia Corkett at the protest on Monday she mentioned that four of his “training buddies” spent the first night in the hospital with him.

— Corkett has medical insurance but the driver of the truck he collided with does not. That means he’ll rely heavily on fundraising to cover expenses that aren’t covered by his policy (which only has short-term disability of three months while his recovery will likely take a year).

— To help raise money, Corkett’s coach (and “father figure” according to his mom) Bryant Howard is organizing a Bike Swap event on May 24th. He’s urging everyone to clean out their garages and closets and sell their used cycling gear with proceeds going to Corkett’s recovery fund (sellers can decide what portion of sales are donated). The event is scheduled for May 24th from 10-2pm at O2 Endurance Training Center in southeast Portland (3015 SE Berkeley Place). To reserve a space (booth fee is $25) contact Bryant@o2endurance.com or call (503) 318-7930.

— A legal team is already working to find out more about how the collision happened. Corkett has a lawyer and the Multnomah County DA is currently investigating the case.

And if you think Corkett is done racing bikes — think again. According to his mom, he has wasted no time planning his return. “He is already planning his training with Bryant. He is planning to finish the season on his bike… nothing can keep that boy down!”

If Brian Willson can still bike at 74, having lost both legs 28 years ago, I bet Alastair can! Wishing you all the best!

And from the BP article the other day:

“Allen was convicted on both charges after failing to appear. He has two other prior run-ins with the law, including convictions in 1998 for driving without insurance and failure to renew his automobile registration.”

If this guy gets his license back . . . well, we know that he will. The privilege to drive is harder to lose than the right to vote.

Unless they’re locked up, it seems that it’s not uncommon for some people having lost their license to drive, to go ahead and drive anyway.

A recent Oregonian story detailed exactly such an occurrence. Some years back, a person DUI in Oregon, collided with and killed someone on a bike. The person was arrested, charged, convicted, lost their license for life, and imprisoned.

Gets out, what’s he do? Despite all sanctions against his doing so, goes and drives drunk, gets caught. Judge had to conclude it wasn’t right to send the guy back to prison, because somehow a glitch in the system missed having this person undergo post prison treatment for DUI. The judge said, ‘the system failed’, the person convicted.

My apologies for not rounding up the link to the Oregonian story, to post here.

I’ve been hoping to read reports that Alistair Corkett’s leg could be reattached. Losing a leg permanently, is tough. Nevertheless, some people do manage to prevail against such adversity, and vigorously so. Best wishes to Corkett.

The only thing that will keep these people off the road is an, ahem, final solutionl

Sometimes the prosthetic leg may be an advantage:
http://www.scientificamerican.com/article/scientists-debate-oscar-pistorius-prosthetic-legs-disqualify-him-olympics/

How about a petition to ask the DA to request permanent lifetime drivers license revocation upon conviction for this guy. It may be time that society starts asking for this, for the worst of the worst drivers.

And perhaps a little jail time as a disincentive to no longer ignore the wishes of the court. It’s ridiculous that he was driving without insurance after having been, supposedly, penalized for it before. I guess the penalty was not a big enough incentive before. Up the bar on that.

That bar needs to be raised by quite a bit; anything less than a penalty with real teeth isn’t a penalty at all. Permanent license revocation, community service to roadway/pathway improvement projects, MANDATORY criminal liability to the medical bills of the injured (including wage garnishment, if driving with inadequate PIP insurance) and jail time for driving without insurance are a good start.

Driving like an irresponsible, reckless fool should absolutely be a ruinous, life-altering experience for a driver who causes serious injury or death. For no other circumstance in our society do we tolerate depraved indifference to human life, which is what reckless, inattentive, and/or distracted driving in an urban area comes down to.

Flesey, the driver who killed a cyclist in Gresham, had his license revoked for life, but he was driving again – DUII, no less. The judge didn’t even sentence him to prison for the recent DUII – just jail time on weekends for his convenience. It’s all in the Oregonian article for which Pete provided the link.

We don’t need a petition about a driver’s license revocation or suspension. We need some real punishment.

Not to mention punishment for the complicity of judges who allow this to continue to happen..

How about let’s let the courts look at ALL of the evidence before we draw and quarter him. What happened to innocent until PROVEN guilty?

Wow–he’s a tough one! Wishing him all the best and looking forward to hearing he’s racing again.

What is Alisters FB page? I will donate a bunch of NOS bike parts to the sale his coach is raising money at. I can also help with a trike for recover and future racing plans he may have.

Hi everyone, I’m a personal injury attorney and I’ve had the privilege of representing several cyclists. I cannot stress enough how important it is to buy quality car insurance. It covers you when you’re riding or walking. I’m really happy that Alistair has great community support, but not everyone is so fortunate. It’s actually pretty cheap to get quality coverage, and as this sad story shows, you cannot count on the other person to be responsible for buying insurance. If you don’t drive or own a car, pay a friend to become a named insured on his/her policy. It can save you from bankruptcy and personal ruin.
See y’all at the swap meet for Alistair!

That is good advice. Two friends of mine have been in serious accidents with uninsured drivers while riding bikes. Despite having good or excellent health insurance, both exceeded their limits and ended up responsible for daunting medical bills.

Concepts like pay-at-the-pump insurance make more and more sense to me.

Can you post where folks can drop off donations if they don’t want to participate in swap meet but do have old bikes or bike parts and accessories to donate?

I have found no mention of the way the pickup’s rear bumper was mounted.

It has a direct bearing on why and how Corkett’s leg was severed. the original bumper was moved back with a step extentin added well inside of the wrapping bumper. This created a captive cythe when Corkett hit the rear of the box while trying to avoid the collision. His foot was in the retaining pedal and the mass of his body then ripped his lower leg off when the bumper snapped his bones. The design of the bumper, if it had been left original, would have just brushed away the impact, and Corkett would not have even broken his leg in the impact.
The modified bumper should be regarded as intent.