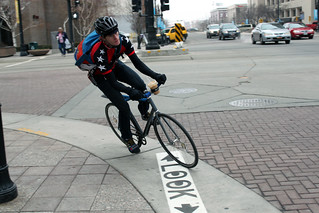 For the second time since the League of American Bicyclists began ranking U.S. states’ bike-friendliness in 2008, Oregon didn’t make the top five.

As it has in every year, Washington led the 2015 ranking that the League announced on Monday. Washington was followed this year by Minnesota, Delaware, Massachusetts and Utah, then Oregon at sixth.

Though Oregon’s slip from third in 2013 (its all-time peak) to fifth last year to sixth this year certainly has echoes of the recent #DowngradePortland campaign launched by local bike advocates in an effort to persuade the League to rescind Portland’s “platinum” rating as a bike city, this statewide ranking is different. It’s also a ranking rather than a rating system, based on a 100-point scale that the League bases on a national questionnaire.

Washington earned 66.2 points on the League’s scale in 2015 based on the strength of its legislation, enforcement practices, policies, infrastructure, funding, education, encouragement, evaluation and planning. Oregon earned 54.2 points.

Alabama, which once again ranked last in the country, got 12.3 points.

The most useful thing in the ranking over the years (PDF) is seeing states that have dramatically improved their ratings. Most notable on that list might be Utah (31st in 2011, 4th today) but there are other risers like Ohio (37th in 2011, 16th today) and states on consistent slides such as Wisconsin (3rd in 2011, 9th today).

Meanwhile, the League has provided a list of customized advice for Oregon’s legislature, Department of Transportation and other bodies to improve our ranking:

• Repeal the state’s mandatory bike lane law. These types of laws ignore the quality and safety of available bike lanes.
• Adopt performance measures, such as mode shift or a low percentage of exempted projects, to better track and support Complete Streets/Bike Accommodation Policy compliance.
• Publicly disclose compliance with Oregon’s landmark Bicycle Bill, ORS 366.514, on every highway, road or street being constructed, reconstructed or relocated.
• Update your state bicycle master plan. The plan update should evaluate and build on the previous bicycle master plan, and reflect changes in bicycle user needs.
• Adopt a comprehensive Vision Zero policy to help Oregon reduce crashes, injuries, and fatalities.
• Increase the amount of state funding dedicated to bicycle and pedestrian projects from 1% of state transportation trust funds to at least 2%.
• Adopt a mode share goal for biking to encourage the integration of bicycle transportation needs into all transportation and land use policy and project decisions.
• Officially endorse the NACTO Urban Streets and Bikeway Design Guide, incorporate its designs into state engineering and design manuals, and encourage its use on the state highway network in urban areas, including collector and arterial roadways.
• Adopt performance measures to decrease bicycle fatalities.
• Consider ways to promote strategic sidewalk and bikeway infill priorities through planning activities grant programs, or funding programs.

Last time Oregon landed outside the League’s top five, in 2011, the Oregon Department of Transportation protested the ranking’s methodology. It’ll be interesting to see whether this ranking draws any formal reply.

You can learn more about the League’s state rankings here.

“Last time Oregon landed outside the League’s top five, in 2011, the Oregon Department of Transportation protested the ranking’s methodology.”

Classic ODOT.
Did they do anything to improve things for us-who-bike since then, or just quibble and forget the issue altogether?

I wonder if all states got that bit of advice? 🙂

Probably not all of them, since at least one state (Washington) already has a vision zero plan, they call it target zero and their goal is no traffic deaths by 2030. http://www.wsdot.wa.gov/planning/SHSP.htm

“VULNERABLE ROAD USER LAW” is one of the listed “top 10 signs of success” for Oregon. How many times has it been enforced? My feeling is that ENFORCEMENT is lacking and that Oregon should be graded down for “Legislation and Enforcement”.

• Publicly disclose compliance with Oregon’s landmark Bicycle Bill, ORS 366.514, on every highway, road or street being constructed, reconstructed or relocated.

If “reconstructed” can be defined broadly as including resurfacing, widening, and repurposing, it seems to me that this action alone could begin to make a huge difference. If it can’t, then…could it? It costs the state very little to check and report on compliance with existing laws.

When you say “can be” I’m not sure if you mean how is it defined now, or if it could be defined that way. But as to the former, ODOT provides the following interpretation, which specifically excludes resurfacing, but widening would trigger it:

“Construction, reconstruction and relocation” refers to all projects where a roadway is built or upgraded. Walkways and bikeways don’t necessarily have to be provided on projects such as signal or signing improvements, landscaping and other incidental work. Preservation overlays are also excluded if the only intent of the project is to preserve the riding surface in usable condition, without any widening or realignment.** Projects where the entire depth of the roadway bed is replaced are usually considered reconstruction projects.”

But yes, it seems that an alternative interpretation that includes most work within “reconstruction” may be possible within the bounds of the statutory language. It’d probably also be a political mess.

If Utah can go from being the 31st most bike friendly state in the US to the 4th in 4 years, the metrics have a way to go. The things that go into a state FEELING bike friendly to the bike rider just don’t change THAT quickly, in my amateur/non-scientific opinion.

But…but…Salem approved a bunch of bike parking and a trail from Corvallis to Albany. That should make us #1, right?

Having put in my time commuting on highway 20, that makes you Number 1 in my book. 🙂

You can actually mountain bike in Salt Lake City.

While there aren’t a lot of bike lanes the vehicular lanes themselves are exceptionally wide.
Bad for pedestrians, good for bikes when that width isn’t piled high with plowed snow.

If Oregon wants to be #1 then we need to move beyond Portland when we build biking infrastructure. Right now ODOT seems to only care about Portland when it comes to building non-car transportation. I get it. Portland has lots of people pushing ODOT and PBOT. But if you want fewer people driving in Portland then you have to support more money going to non-aut transportation outside of Portland. And Portlanders need to stop inundating the cities they work in with their cars and vans.

“Right now ODOT seems to only care about Portland when it comes to building non-car transportation.”

Sandy and MLK don’t count; they’re no longer ODOT’s to screw up.

What about the Historic Columbia River Highway State Trail. Not a cheap project by any means. It is a fairly large investment of ODOT’s time and energy.

Vermont added sidewalks and bike lanes in many towns hit by flooding in 2011.

In 2008, ORS 811.065 went into affect requiring buffer distance between motor vehicles and people on bicycles but I’ve never heard of someone being cited for it without actually hitting the biker. 🙁

I would love to see a sting operation specifically designed to bring awareness to this law or change it to a Class A traffic violation.

I actually called 911 last year when a very aggressive driver came within about a foot of me on Farmington Road/Beaverton-Hillsdale. A few minutes later a nearby cop called me back and, while being very nice about it, said he basically couldn’t do anything about it unless he witnessed it personally.

Perspective on these rankings from Minnesota, the #2 state twice in a row. Oregon has some great things going for it: reasonably polite drivers, spectacular and varied scenery, and a great bike-lane network criscrossing about 10 square miles out of a 100,000-square-mile state. But I’ve gotta say, on balance I’d rather ride here in Minnesota.
– Outside a 3-mile radius of the urban core, bike facilities are better in this metro area.
– Bikeshare. Used it yesterday for a one-way trip (rode the light rail to St Paul and biked back).
– There are a dozen mountain biking areas within the largest metro area (compared with Zero for Portland, and I believe also Eugene).
– Better on (and off) road bike facilities in the second and third largest metro areas (Rochester and Duluth) when compared with Eugene and Salem.
– Many hundreds of miles of long-distance rural MUPs.
– Far more rural roads and highways with shoulders. An awful lot of rural Oregon highways are shoulderless and absolutely horrific to ride on if there’s any traffic at all..
– Oregon is not the #1 cycling state per capita. Minnesota is.
– ODOT.
– Minnesota is spending more on bikes. Outside the Columbia River bikeway (which will be huge Huge HUGE for Oregon tourism), OR’s momentum seems to be in the wrong direction.

Some will point out the brutal weather in Minnesota, and it’s true that outside the extensive bike-path network you don’t want to do much riding here for about 3-4 months of the year (FWIW, the same 3-4 months of the year that few people bike in Oregon, outside the Portland core). But Oregon has difficult topography (a partial cause of its sketchy rural highway network), so IMO those two cancel out.

Rereading the discussion above about the little-invoked (never-invoked?) VRU law, I’ll cite a couple more problems Oregon has when it comes to bike friendliness:
– Extremely lax law enforcement in Oregon. Among the lowest highway-patrol densities in the country, according to some stats I saw a while back.
– Poorly educated drivers. Stupefyingly, Driver Education is still not required of young Oregon drivers and most natives have never had it. MN drivers might willfully violate the law more often, but at least they know the rules before breaking them.