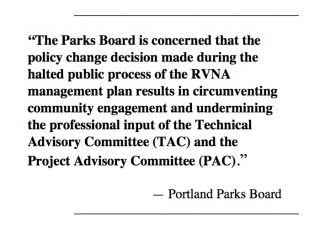 Add the 16 members of the Portland Parks Board to the list of people where blindsided by a decision last month from Commissioners Amanda Fritz and Nick Fish to prohibit bicycling at River View Natural Area.

On Wednesday the Board sent a pointed letter (PDF) to both commissioners demanding to know why the two leaders made the unilateral decision without first consulting the project’s two advisory committees, the public, or the Parks Board itself. Even the Parks Board’s representative on the River View Project Advisory Committee, Mauricio Villarreal, did not learn about the decision until one day after it was announced.

Here’s an excerpt from the letter:

At the March 4 Parks Board meeting we heard from several community members (some of whom served on the RVNA PAC) about the biking ban, but primarily expressing their dismay about the decision having been made during the interruption in the planning process…

The Parks Board is concerned that the policy change decision made during the halted public process of the RVNA management plan results in circumventing community engagement and undermining the professional input of the Technical Advisory Committee (TAC) and the Project Advisory Committee (PAC). Furthermore, we feel that this action is a missed opportunity for public agencies, stakeholders, and the public to partner in a transparent and collaborative spirit.

We would welcome an opportunity to discuss this matter with you, with the goal of understanding how and why this decision was made and why the PAC process was ceased last summer. We also hope to work with you to avoid similar pitfalls in the future.

If you recall, we reported on the March 4th Parks Board meeting when they first heard of the bike ban. At that meeting Parks Director Mike Abbaté fielded several questions from board members about the decision. Board member Jim Owens, a principal at environmental planning firm Cogan Owens and Green with 35 years of public policy and community engagement experience, said he was “very concerned” that the board was not consulted prior to the decision.

At that meeting, Owens asked Abbaté if there was a way to “re-open the conversation” about biking at River View to which Abbaté replied, “I don’t have an answer.”

Parks Board member Mauricio Villarreal served as the board’s representative on the River View Project Advisory Committee. Even he was unaware of the decision. “I never heard anything until yesterday,” he said at the March 4th board meeting, “I would echo that the process broke down.”

This letter, along with the an editorial from The Oregonian and a letter from the three largest bicycling advocacy organizations in America, should serve to validate the outrage over this decision from many Portlanders. It should also buoy the spirits of the Northwest Trail Alliance, the Portland-based non-profit organization that has filed an intent to appeal to the Oregon Land Use Board of Appeals just to get answers from the commissioners and get a shot at a fair public process.

The NWTA’s best chance is to get the LUBA to remand the decision, which would force the commissioners to do what the Parks Board has wanted all along: to simply “re-open the conversation.”

Mountain biking for all!

Respect for process for all!

So glad to see this! I really want to know more about this lawsuit and what made them to make such a rash decision.

“…This letter, along with the an editorial from The Oregonian and a letter from the three largest bicycling advocacy organizations in America, should serve to validate the outrage over this decision from many Portlanders. …” maus/bikeportland

Whether the mentioned groups ‘outrage’ is validated, depends upon what kind of situation the commissioners are having to deal with, and what they can say about it. Presumptions people criticizing the commissioners’ actions, have made, could be way off the mark. If that turns out to be true, I wonder if the outrage will be withdrawn and exchanged for an apology if one should turn out to be in order.

One commissioner making a so called unilateral decision, isn’t too far fetched, but the fact that two commissioners made the decision to cease mountain biking, possibly temporarily, lends credence to the possibility that there is a bigger problem responsible than, as some people seem inclined to believe, the whims of two city commissioners.

Something to do with ‘conditions of sale’ could account for the commissioner’s decision away from the public, to curtail mountain biking at Riverview. There’s a reason the commissioners have been tight lipped to the public about the curtailment. They may be obliged to keep their silence. Being the mayor, I figure Hales knows the reason, and he also may be obliged to stay silent about the reasons for the curtailment.

All three could in fact, be working to resolve issues so that mountain biking can resume on the Riverview natural land.

What would oblige city commissioners to remain silent?

“What would oblige city commissioners to remain silent?” bjcefola

bj…good question. I’m not sure, just a hunch. As I said, I wonder if it may be the seller of the land attached some specific conditions to the sale, the significance of which didn’t become fully realized by the city and commissioners until after TAC and community meetings had been in progress for some while.

Or it could be something else. Seems to me that if there were no conditions obliging their silence to the public, it would be easy for the two commissioners to explain exactly to the public, the reason for their actions. Much easier than having to deal with static from people grasping at straws trying to figure out what’s going on, and coming to conclusions that when all is settled, may turn out to be completely unfounded. I’m looking forward to the exciting conclusion when all the mysteries are explained.

wsbob, specific conditions of sale might well preclude mountain biking. But if so why not tell us, what purpose is served by pretending a binding legal agreement is something other than what it is?

Same goes for any settlement associated with the utility lawsuit, that might well have changed the city’s understanding of how it can use the land. But the court proceedings aren’t any secret to the plaintiffs, nor are the city’s actions. If the city is reacting to something in the proceedings then the plaintiffs probably already know it. Keeping it secret then would be like keeping the bombing of Cambodia secret so the Cambodians don’t find out about it.

I think all secrecy is doing here is short-circuiting informed conversation about public policy. I’m having a hard time coming up with a scenario where that’s justified.

Yes, these two commissioners have clearly shown a history of fighting for and working for bikes (esp. mountain bikes) in the past……..

Oh, hell. Let the mountain bikes tear it up. Ultimately they will be the only users. The city will decide it’s not worth maintaining anymore and sell it off to developers.

Mountain bikers don’t tear things up, unless you’re talking about invasive plants during the 400 hours of work parties they’ve already done at Riverview. Mountain bikers advocate for sustainable trail building techniques and volunteer their time to create those kinds of trail systems.

You must have mountain bikers confused with hikers that build unsustainable mud pit trails and cut switchbacks to go find their off leash dogs, right?

I would be fine with mountain bikers being the only users. After all, hikers are the only users of nearby Tryon Creek. It would be an excellent opportunity to compare the effects and trail-building skills of each user group on a natural area.

I’m looking forward to Wednesday’s PAC. I hope to see many of you there with helmets in hand. Get there *early* if you hope to ask a question.

Goal should be 100% of seats occupied by cyclists, with everyone signed up to speak. I’m hoping the road cyclists will show solidarity, which should be returned in the future.

many of us are both mountain bikers AND road cyclists.

… and hikers and runners.

Road vs. mountain vs. walk vs. run vs. fixie, only serves those who want to divide and conquer.

and people that own dogs.
I just hate all this “divide and conquer” mentality that the city seems to almost encourage.

Well done Jonathan! Thanks for keeping this issue “front page” news. Now lets get some mountain biking heads into that meeting!

To think that given all that’s happened with how the city has handled the single track advisory committee and now the riverview process that it could end with cycling contingent having to “apologize”, is a HUGE PRESUMPTION on your behalf.

So for fork folks to be unhappy with Fritz/Fish’s direction actions is to presume? That’s rediculous.

But then I remind myself that you make up your own terminology to justify your extreme anti-trail sharing bias and go out on a limb playing devils advocate in defense of the mace/tazer/gun-toting Sandy ridge convicts.

Maybe a dumb question: has anyone attempted a City of Portland information request (BCP-ADM-8.03) for emails to/from Commissioners Fish/Fritz with the time frame of the last year with keywords “mountain biking” or “river view”?

At the very least it would illuminate the internal thought process to banning MTB at River View. At the most it might illuminate the “back door” shenanigans everyone seems to think are happening here.

Yes. I hope NWTA’s lawyer is looking in to that.

Well done Parks Board! Can you comment on why the TAC is planning the property without public input? The TAC document to be reviewed at the PAC on Wednesday does NOT reflect the public’s wishes, nor does it accommodate for modern riparian sensitive trail maintenance practices. The planned TAC map eliminates any and all human access to the bulk of the property, even through seasonal streams, while simultaneously building through the perennial streams.

Here is my guess about what’s going on: Portland Harbor Superfund. See the April 2 Portland Tribune story. The EPA is reviewing data on the River conditions downstream from the Steel Bridge, and will propose a clean up/restoration plan for that section, potentially costing as much as $2 Billion. In addition to cleaning things up, a restoration plan for the lower Willamette must also include mitigation or actions to insure that the River does not revert to unacceptable pollution levels. Mitigation sites are few and far between in the Harbor area…Willamette Cover, end of the Swan Island Lagoon and one or two smaller sites on the west side of the River. Water flows downhill, right, so what happens upstream from the Superfund site impacts, for better or worse, on the condition of the River in the Harbor. The River View property could well be under consideration as a mitigation site; that would mean virtually NO human presence. Among the parties at the table for establishing Superfund restoration/mitigation are the four NW Treaty Tribes, who understandably put the survival of the Pacific Salmon way above Euro-American recreation, and have the law of the land on their side…for which we should all be grateful after all they have suffered at our hands.

Maybe, but compared to the dams, bridges, impassible culverts, pollution, CSOs and climate change, banning everyone from river view is like a bandaid for a corpse. Its not going to help.

If this were the case, was it really wise for Parks to buy into this site?

Doesn’t exactly sound like their jurisdiction or mission then.

Y’know. That would be a really reasonable explanation, so reasonable in fact, that they would have said so.

The commissioners made a drastic, seemingly-personal decision in the middle of a halted public process without any factual evidence to support their decision. That won’t stand, and they’re probably starting to realize this ( hopefully ).