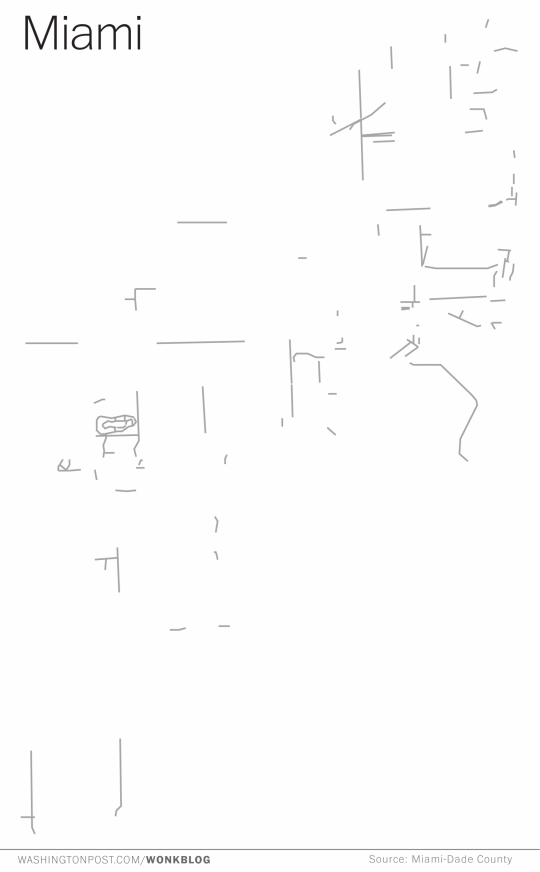 Miami with only the bike lanes showing.
(Image: Washington Post)

Want to get your message in front of our awesome audience? Sponsor the Monday Roundup and we’ll give you these lines of text and a link to your site. Get in touch for more info.

Mandatory reflection: Copenhagenize.com provocateur Mikael Colville-Andersen started a clever petition in response to Volvo’s spray-on reflective “Lifepaint” for bikes: because black cars are 50 percent more likely to get in collisions, every Volvo should be painted in Lifepaint. Plus he urged Volvo to encourage car helmets, for the sake of safety of course.

Shifting blame: A DC-area transportation agency urged people to “wear something bright or reflective” to avoid being killed by cars. A local man proposed an alternative version.

Crowdfund gems: Matt Haughey, creator of Metafilter.com, local bike racer and Oregonian, writes about some of his favorite Kickstarter bike projects over the years.

Mountain-bike shortage: “Portland, you are not bike-friendly,” writes BikeMag.com in a scathing column. “Not when you now offer up less than a mile of singletrack within city limits to the thousands of mountain bikers who call you ‘home.'”

Quantifying costs: Every mile in a car costs society six times more than a mile on a bike, according to a new Swedish study. The cost of bicycling appears to be declining.

Broken coalition: TriMet is trying to rally public transit supporters to a rally Thursday that aims to “send a powerful message to Congress” to support federal transit funding — but the region’s two most prominent pro-transit organizing groups, the transit workers’ union and OPAL Bus Riders Unite, don’t seem to be involved.

Transpo bill: The federal DOT has a complete proposal, for what it’s worth.

Hit and run: A Portland man got 15 years’ prison for driving on prescription drugs, hitting a woman in Vancouver and leaving the scene.

Driverless carnage: Toyota has reached a milestone: A car that commits hit-and-runs all by itself, reports The Onion.

Bike share equity: Instead of trying to squeeze equitable outcomes out of bike sharing systems, bicycle anthropologist Adonia Lugo argues that maybe we should conclude that bike share is inherently inequitable.

Saving Florida: After decades of sprawl, Florida is turning around, narrowing its urban state highways to 10-foot lanes and considering roundabouts for every project.

I love the suggested alternative StreetSmart ad. Not only is it nicely cheeky, but it points to the real heart of the matter: people are at the core of transportation safety. Technology, while important and often helpful, is secondary to the habits of the people using it.

Trimet is no better when it comes to their choice of what to focus on. Like ODOT they *love* sing-song word play more than they should.

Just to clarify, the D.C. area group that urged folks to “wear something bright or reflective” was not a transit agency but the Metropolitan Washington Council of Governments, the local MPO for the D.C. region (similar to Portland’s Metro in concept if not reality). It was part of a broader safety campaign that targeted people’s driving, bicycling, and walking behavior and put more of a focus on drivers, but probably should have been more careful about the language they used. http://www.bestreetsmart.net/

Thanks, Patrick. I rephrased a bit to make this clear.

This was posted in one of my neighborhood’s unofficial papers last week:

The Oracle received a phone call from a neighbor concerned about
walkers and runners, especially in the early morning or evening.
Drivers rounding one of the curves can come upon a group of
walkers or runners quite suddenly. If you are walking or running
when it is dark, be sure to wear light clothing or reflective gear,
use lights and keep to the side of the road. Walking or running
four abreast is a recipe for possible disaster; you never know when
a driver might round a curve while distracted by unruly kids or a
cellphone call. Protect yourselves and help drivers by increasing
visibility.”

Don’t kill anyone with your car. Slow Down. Pay Attention. Be Patient.

Adonia’s take on the possibly irreducible inequity of bikeshare is interesting. Without any insight into the experience with actual systems since, my hunch here four years ago struck many of the same notes.
http://bikeportland.org/2011/08/16/as-opposition-grows-supporters-defend-bike-share-funding-decision-57732#comment-1921637

That bike lane map is pretty generous, it must take into account sharrows as well as actual infrastructure because that is not what downtown Seattle looks like to ride a bike in.

Ben B
Reply to  Cheif

I once biked on 4th avenue as though the sharrows there meant something. Was nearly killed by a tire-catcher grate that ran across the whole lane. It’s weird that it would include that, and not include the Burke-Gilman.

I absolutely LOVE the Maryland person’s alternative PSA in it’s exact wording. It is to road safety PSA’s what Beethoven’s 9th Symphony or “London Calling” is to music.

Do you not understand what THE ONION is ?

I believe they do. Can’t we have a little fun here?

I know it’s a tongue in cheek joke, but I think the lifepaint on black cars idea should be seriously considered by car companies. If it’s not supposed to be visible in broad daylight, then why not?

Brad
I know it’s a tongue in cheek joke, but I think the lifepaint on black cars idea should be seriously considered by car companies. If it’s not supposed to be visible in broad daylight, then why not?
Recommended 0

“The “paint” — which lasts for about one week after application — also washes off and will not affect the color or surface of the chosen material, the agency said.”

The permanence could most likely be adjusted in the lab.

the company that makes it, Albedo, has a permanent version…

Sorry, but “lifepaint” just sounds like, “here, huff this! Quick!”

Either that or something from Dutch Boy.

Matt
I believe they do. Can’t we have a little fun here?
Recommended 0

sure , but if you post “Driverless carnage: Toyota has reached a milestone: A car that commits hit-and-runs all by itself, reports The Onion.”

Sounds like you don’t know what the Onion is. Give the readers of this blog a little credit.

“to build productive, useful technology into vehicles that can improve the time people spend driving or riding without distracting them from the road.” i am thinking, lots of glass, very few posts, and a few mirrors.

“thinking up new technology is sometimes as simple as setting up four office chairs to imagine what would be useful to drivers – and what would be more than they can handle.” but not actually studying any research on the distractability of drivers.

“an Intel-powered computer that connects to smartphones to track weather, parking, routes[,] and arrival times.” and in what way does all this not distract the driver from the primary task?

HJ
Reply to  are

On #3, do they make the car disable the call and texting abilities of the phone while the vehicle is in motion? If not, total waste of time. Also, I fully agree, don’t see how this can possibly not distract drivers.

Drivers are bored, need something to do.