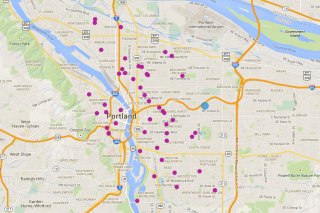 A map of Getaround’s 48 shared vehicles as of today.
(Image: Getaround.com)

Getaround, the peer-to-peer carsharing service that we’ve covered since its 2012 arrival in Portland, has narrowed its fleet in exchange for a big reliability upgrade for its users.

For three years, Portlanders have been able to bring in extra cash by sharing their personal cars, trucks and vans on Getaround. But until this spring, a car owner had to personally approve every request, forcing reservations to be planned well in advance.

Now, the service has removed that hurdle. Anyone sharing their car on Getaround must obtain a Getaround Connect dashboard device for $99 plus $20 a month, then mark online any time slots the car is available for sharing.

If a Getaround driver sees an available car using the company’s app or website, they can reserve, access and start using it immediately, no approvals or key handoffs needed.

“When we first launched on-demand rentals in San Francisco we quickly realized this was the way people wanted to rent cars,” Getaround spokeswoman Hailley Griffis said in an email. “In order for Getaround to provide a real alternative to car ownership, renters need to know they can reliably get a car, at the drop of a hat, when they need one.”

For people who want to drive Getaround cars, the main downside of the switch is that there are now many fewer cars available, because not too many people have chosen to install and pay for a Connect service. A year ago, Getaround’s website listed hundreds of people around the metro area with cars theoretically available for sharing; today there are just 48.

The lower competition may also drive up the price of a Getaround rental, which tends to be cheaper by the hour than comparable Zipcars and cars2go. (Like those companies, Getaround covers the driver’s insurance, but unlike them it doesn’t cover the driver’s gas.)

However, the new system has also weeded out the dozens of Getaround users who might have signed up years ago and forgotten about it, or who might habitually back out after someone attempted to book their car.

Moreover, the lack of competition may be a big advantage for people who continue to share their cars and trucks on Getaround. It almost certainly means more revenue per shared vehicle.

“Since shifting to instant in San Francisco, owners are earning an average of $500/month,” Griffis wrote.

I don’t think I like where this is going. GetAround served a pretty nice niche, it was GREAT for if I needed a car for the weekend or an older model car with chains or a bike rack, something specialized. The ability for owners to kind of test the waters, or occasionally rent out a car they use regularly attracted a steady stream to the service. Reducing inventory this way (rather than just removing owners who never respond, or always say no) is a bad decision in the eyes of this multi-year user of the service.

Follow up, I logged in to look and the last 4 cars I have rented are offline, I suspect for good.

They are doing this because Relay Rides is eating their lunch by doing exactly what you are saying. I use Relay Rides all the time because I want to rent a car for the day/week, not the hour. They were forced to become really good at hourly rentals at the expense of daily rentals.

I’d never heard of Relay Rides prior to your post. When did they enter the Portland market?

I’m not sure. A couple years ago at least.

I wonder how much it would take, in practice, to recoup that investment. $340 for the first year = how many times renting it out?

Maybe I’m missing something on their site, but perhaps it would be nice to see a map of where the cars are located prior to signing up?

Both my girlfriend and I tried using Getaround a few times before giving up for good. We got declined on our each rental to the point we gave up. i welcome this change, seems more likely to have success finding a rental.

I have used the service myself, and have had a “go to” car when I needed it – the owner and I have a good Getaround “relationship.” I will say that yes, there were times where I was very frustrated with the service, and had times where the owner backed out for whatever reason. Get around di provide credit to me when that happened in the past. I have used some of the trucks in the past, but now find that they are no longer available, so I will have to adjust there. Anyway, I will be interested to see how this reboot all goes.

I have tried Getaround a couple times, but none of the car owners I tried to sign up with got back to me. Which meant it wasn’t a reliable way to have access to a car.

With the new system I’ll try it out again.

With luck, if the improved reliability of the service results in more people using it, more car owners will make their cars available again.

It occurs to me that this may also reduce the potential for discrimination by car owners on the basis of, well, anything they want.

A friend of mine, who is a 24 year old man, says he had no success trying to rent on Getaround for a whole year. Because what fool would rent their car to a male in his early twenties? Gosh, I wouldn’t! Whether or not I consciously though about it. He gave up and bought his own car.

This is the very discrimination that people like about Getaround – it’s peer-to-peer, so you get to check a person out, see what they look like and where they went to school, and decide if you want to trust them with your stuff. If I owned a car and put it on Getaround, I would appreciate this about it. I wouldn’t be required to follow any federal or state laws about providing the same service to everyone, regardless of race, creed, sex, etc. I could decide based on alma mater! Age! Pets! Neighborhood! It’s pretty cozy feeling, I find, doing business only with people you like. I mean that earnestly.

I think that all of my successful Getaround rentals were from people who already knew me, within one or two social degrees of separation. Of my many rental requests to people I didn’t know only one was every accepted, and it was probably because the owner lived 1 block from me.

Peer-to-peer car (or house) rentals encourage owners to discriminate on any basis, so surely that leaves a large number of people out, people who don’t seem trustworthy on the basis of their online profile, for some reason.

Imagine if you are a young black man trying to rent on Getaround in Portland. It seems almost laughable to me that Getaround would be an option for that person. Perhaps in a more diverse city it would be more realistic.

So I wonder if, by eliminating the hemming-and-hawing option, the opportunity for owners to decide how trustworthy the renter seemed, Getaround will become available to a more diverse set of renters. That would certainly be a good thing.

We rent out our car through Getaround and were earning around $100-$200 a month before the change. Last month, less than $30. Our car is in a prime location downtown. We’ve also had several renters request the car and then cancel, which never happened before. I’m reserving judgment, but…