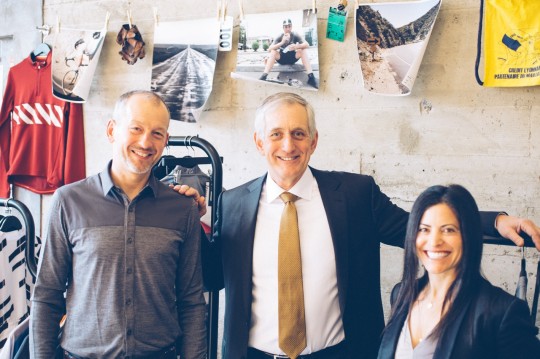 Simon Mottram, the founder of Rapha Performance Roadwear, was in Portland on Tuesday and he met with Portland Mayor Charlie Hales. Hales paid a visit to Rapha’s North American Headquarters in northwest Portland.

Rapha was founded in 2004 and in recent years has enjoyed a massive spike in popularity. The company has sponsored Tour de France champions and is known for premium prices and dedication to epic road riding. In addition to an online store, they also operate nine retail “Cycle Clubs” around the world — including three in the United States.

According to Rapha spokesman Chris DiStefano, the conversation during Hales’ meeting also included the company’s North American General Manager Hillary Benjamin. They discussed the local bicycle-related industry and how Portland might do even more to encourage and promote it. Mottram, who lives and works in London, told Mayor Hales about the success of cycling in the UK and the recent strides his hometown has made in bicycle infrastructure.

Another activism non sequitur in BP comments… This is an Industry article.

Rapha is doing fine customer-wise, and does plenty to encourage people to ride their bikes in their own unique way. “safe biking facilities” is not their milieu, epic rides and the stories attached to them are.

Let’s get real for a second here. There’s a few of you who just seem to use this forum to piggyback onto BP’s reach to push your own opinions and agendas with increasing frequency. you should consider creating your own forum, or move it to the forums…

I hear your concerns with Adam’s comment. But I don’t think there’s anything wrong or even annoying about it. I think he’s simply saying that better bike access in Portland would be good for Rapha’s bottom line.

And please be nice to other commenters. I don’t appreciate your suggestion that Adam should take his opinions elsewhere. Oh, and the forums don’t really exist anymore fwiw. Thanks.

never be sorry for taking a swing & getting some wood on the ball. based on the number of “recommend” clicks there are more than just a couple others who share your views.