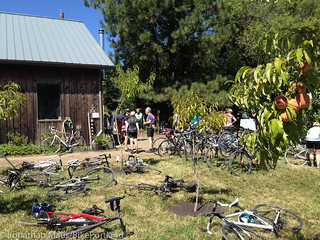 Portland’s burgeoning bicycling relationship with Japan will now include a few great meals.

Chris King Precision Components, a manufacturer of headsets, hubs, bicycles, and other parts based in the northwest industrial district, has announced that their annual Gourmet Century event will venture to Japan for the first time ever.

The event, which started in 1999 in Santa Ynez, California, has expanded to five cities in 2015. The company announced yesterday that Aichi, Japan (June 6th) and Asheville, North Carolina (August 22nd) are the two new locations.

As we shared after taking part in the 2013 edition, the Gourmet Century is part bike ride, part traveling feast. Participants pedal a “pleasantly challenging” route that works up an appetite. Then they’re treated to fine snacks and meals of fresh, gourmet food dreamed up by professional chefs specifically to satisfy a bicycling appetite.

The international move is a recognition of the healthy market for Chris King products in Japan. King’s bicycle brand, Cielo, has a strong following in Japan thanks to Sim Works, a distributor based in Aichi. Sim Works is owned by Shinya Tanaka, a man we referred to as “Portland’s handmade bike ambassador to Japan” in a 2012 profile.

King spokesman Dylan VanWeelden share with us via email that, “We will be bringing a bit of Portland food to Japan for our friends to enjoy.”

The expansion to five Gourmet Century events also comes as the company’s full-time event chef, Chris Diminno, settles into his role after being hired in late 2013 (King employs a separate full-time chef to prepare meals in its on-site employee cafe). “We’ve always had more demand than we can handle with the Gourmet Century events,” VanWeelden said, “and now with Diminno on-board we are able to provide a few more events.”

(Note: King is only one of several Portland bike companies with growing economic ties to Japan. We’ll bring you that full story soon.)