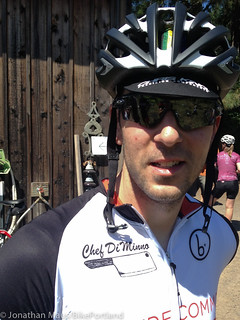 Chris King Precision Components has hired well-known Portland chef Chris DiMinno. DiMinno has spent the past five years as head chef at Clyde Common, a popular restaurant on SW Stark adjacent to the Ace Hotel. The move by King has made headlines in the local food scene and it cements the company’s already strong connection between bikes and food.

As we shared earlier this month, Chris King (the man and the company) is well known in the bicycle industry for a commitment to quality and craftsmanship. Those principals have been pillars of the company for over thirty years and have established it as one of the strongest brands in the cycling world. What is lesser known is King’s love of gourmet food (as chronicled by The Oregonian). From the company’s long-running annual event, the “Gourmet Century” and their “Cielo Salon,” to their on-site cafe which serves two, made-from-scratch meals a day for its 120 employees; King has now taken his love of food to a new level.

DiMinno is no stranger to cycling. He’s a former downhill mountain bike racer who is just as comfortable on a road bike. When I ran into him at the Gourmet Century earlier this year he was sporting a custom Cylde Common team jersey and told me he’s, “going after any opportunity” to combine his two passions of cycling and food. Now we know he really meant it!

Can’t think of anyone else more deserving of this dream job. Well played sir.

Congrats to both DiMinno and Chris King. I’m pretty sure they’re both winning here.