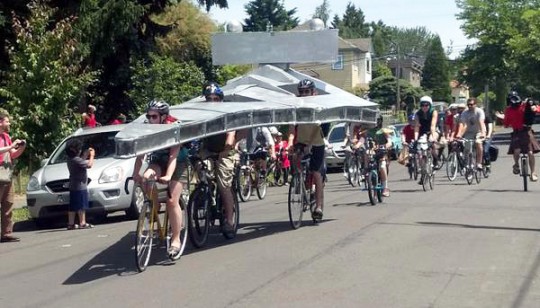 This is your chance to steer one of the flagships of Pedalpalooza‘s annual Star Wars vs. Star Trek ride.

Though we won’t know until December whether Imperial-class star destroyers survived the death of the Emperor, this particular model is in good shape but looking for a new home in advance of this summer’s festival of bike fun in Portland, according to a recent Craigslist “free stuff” post. 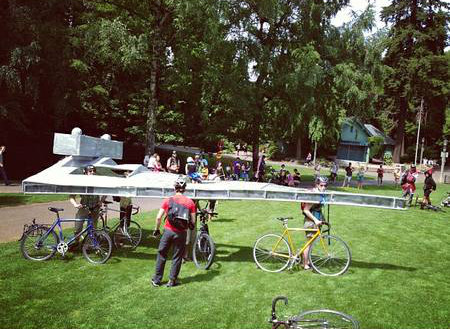 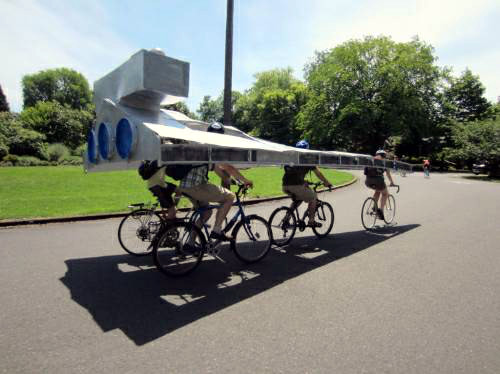 And here’s one of it disassembled at its screw joints into two sections for backyard storage: 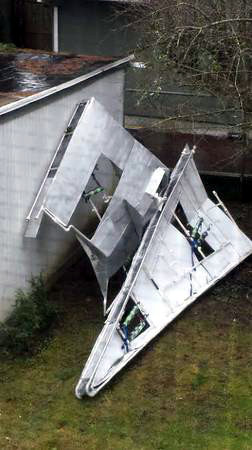 “We want this to go to a good home, so we’re letting it go for free,” the current owners write. Considering that one of these requires the combined annual economic output of several star systems to produce, that’s a pretty good deal any way you look at it.

Man! – what a chicken coop that would make!! (Assuming no further bike love is spread with it.)

I bet the bike registration fee for this is going to be pricey.

As this is more of a “costume” than a “vehicle” I don’t see any way they could tax this even if there was a “bicycle tax”. 😉

Who would want a vehicle of the evil Imperial oppressors?

For years I’ve wanted to make a Star Trek shuttlecraft float for an event. It’s just one of many bike powered crazy ideas I’ve dreamt up over the years.

That said, my Klingon BOP (Bike of Prey) has been very under recognized… Probably because the D**M cloaking device is on, and I can’t find the OFF switch.

I just hope it has good safety lighting when cloaked…unless your shields are up!