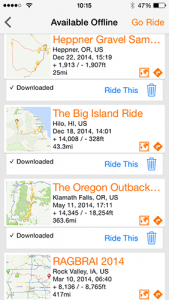 Portland-based Ride With GPS has just turned your smartphone into a much more useful tool for exploring backroads by bike. On Monday they announced their biggest new feature since launching eight years ago: “offline maps,” which allow you to download route info and get voiced, turn-by-turn directions on your smartphone (iPhone or Android) even without a cell signal.

Combine these new offline maps with their already stellar GPS navigation and cycle-computer app (free, or $3.99 to unlock all features) and you’ve got what Kevin Prentice, the company’s head of business development calls, “a viable substitute for a traditional cycling GPS unit.”

With this upgrade, you can now open up the Ride With GPS app (released last year), select one of your existing routes, hit “download” and a few taps and seconds later you’ll be ready to ride. “Offline Maps allows riders to take unfamiliar routes,” says Prentice, “knowing the map will be available if they lose service.”

“The Ride with GPS app is now a viable substitute for a traditional cycling GPS unit.”
— Kevin Prentice

If you’re worried about battery life (and you don’t have one of those nifty, dynamo-powered USB ports on your bike), Prentice recommends switching to Airplane Mode on Android phones and turning off cellular data on iPhones.

I’m a big fan of Ride With GPS, partly because they’re a home-grown success story, and partly because their app and website are very well thought-out and easy to use. Unlike Strava, their emphasis is not on performance and KOMs, but on exploring new routes and sharing them with others.

Here’s a screenshot of the app: 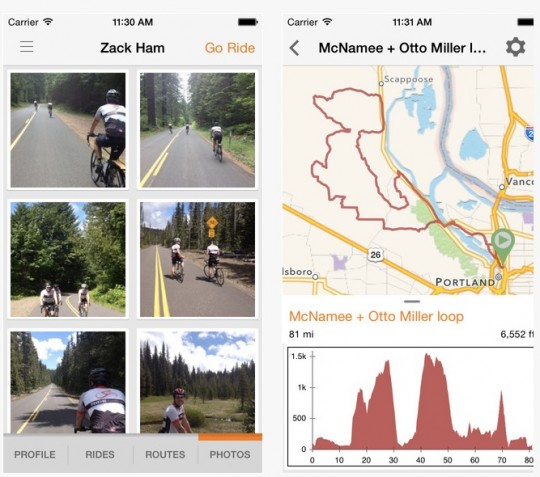 Since we last profiled them in 2012, their user base has grown to nearly 500,000 users around the globe, a 250 percent increase in just over two years. The company has five full-time staffers and plans to add 4-5 more by the end of this year.

Stay tuned for another big announcement from the company in the next few weeks. We can’t wait to share their latest project that will help people share rides and routes in exciting new ways!

Download the app and learn more about the offline maps feature at RideWithGPS.com.

Wow, this is awesome! I’ve hacked together a system with reasonably good turn-by-turn functionality between RideWithGPS, TCX files downloaded to Dropbox, and Co-Rider, but that doesn’t show a map if you’re in airplane mode or without service (just a route), nor allow for re-routing (I’ve used Offline Topo Maps for that – but at that point, there’s no computer guidance, just a map with a dot for where I am). Pretty sure RideWithGPS just got themselves to the point where I’m willing to pay for their service….

I no longer want one of those USB chargers for my dynohub, nor care terribly much about the battery life of any given phone. An external battery costs all of $10. On the bike, it’s only the weight and size of a decent multi-tool, but you don’t have to keep it there.

+1 on the extra battery. I always ride with one, and insist on having a phone where I can swap the battery.

I am really interested in getting one of those external batteries.. Any recommendations?

CNET has reviews for some. Depends on how much reserve power you want.

Personally, I’m using a 13000 mAh beast from Anker, a well received brand, which has the bonus feature of a “flashlight” (low power white LED).

It’s overkill for day trips and a little bulky. There are plenty of smaller, lipstick-sized options that’ll hold a second charge. All of them are great, and I dare call them a 21st century liberty on the order of birth control in the last.

Completely agree. I had the Dahon dynamo charger on my bike. It was difficult to use, and one more thing to break or have stolen. I abandoned it as soon as the price of external charger packs came down. Those, I can use in all circumstances–riding, walking, flying, or just waiting for power to be restored at home after a storm. I wouldn’t say no to built in dynamo charging on my next bike, but it’s not a good all-round answer.

Playing with this now, really cool! Would love it if the app could display heart rate and I wish someone made an iPhone 6 case that has a Garmin mount on the back. Anyone know of such a thing?

Hey Burk! We have free, comprehensive support for Bluetooth and Bluetooth Smart devices so you can view heart rate, cadence, speed, and temperature metrics in real time while you ride. This video will show you how to pair your device, and then select your desired metrics in the Ride screen: http://ridewithgps.com/help/pairing-bluetooth

Thanks! That looks like a pretty good option, they even have an “out front” mount.

Anyone know if this will work with an iphone 3?

I have used the Sinewave revolution converter with my dynamo hub to charge the phone. I get 20 to 30% charge in about an hour of riding. It makes a back up battery unnecessary, although I do carry one of those along on longer tours. I can charge a backup battery from the Sinewave converter as well.

“Stay tuned for another big announcement from the company in the next few weeks. We can’t wait to share their latest project that will help people share rides and routes in exciting new ways!”

I’m looking for the announcement in the archives, but can’t seem to find it. Can you please point it out, Jonathan?

Shortly after offline maps was released we announced our Area Ambassador program, of which Jonathan was one of our first partners. In case you haven’t run across it on the website, here’s a link: https://ridewithgps.com/ambassadors Since the launch our ambassadors have added hundreds of great new routes all over the world, and many right here in Oregon.

Awesome! Thanks @RidewithGPS! I have recently started using your app again after being sucked into Strava for a couple of years. I am currently running Strava and Ride with GPS concurrently because of the social media features of Strava. I’m wondering if that eats up more battery power.

How can I contact you off line from here to learn more?