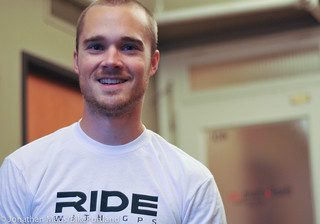 Cullen King is the co-founder of Ride With GPS.
(Photo © J. Maus/BikePortland)

A pair of Oregon State University computer science majors are riding high on the success of a business they started just three years ago. Cullen King, 29, and his partner Zack Ham, 28, are the duo behind Ride With GPS, an online tool that allows people to plan routes, create custom cue sheets, transfer data between GPS devices, and compare their ride logs with other users.

Cullen, who works from his home office in northeast Portland (Ham lives in Eugene), stopped by my office yesterday (the last time I featured them was in June 2010 when the attended the Oregon Bike Summit).

Cullen said the idea for Ride With GPS came when he and Zack would ride motorcycles together. “We wanted a way to create and share routes,” said Cullen. “Eventually, Zack got a bike and convinced me to start riding too.” Now they are both hooked on bicycling and they’ve continue to refine their tool. 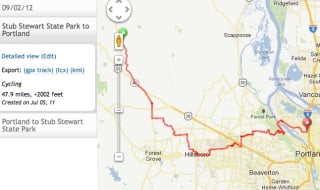 They incorporated the business in 2009 and now Ride With GPS boasts an impressive 120,000 users. And it’s growing quickly. Cullen says they add about 300 new users per day. Completely self-funded (or “boot-strapped” as it’s known in the entrepreneurial world, to differentiate between venture capital-backed endeavors), Ride With GPS relies on monthly user fees (they have both free and paid plans) to pay the bills and grow the product. Cullen and Zack both work for the company full-time and they now have two other employees.

I don’t ride with a Garmin or any other GPS unit yet; but I know that a lot of people do. I’ve got an account with Ride With GPS and have found it a super-easy way to create and share routes. I used it for a recent ride out to Stub Stewart State Park and I also imported a ride (created by a friend) into my account. It’s a solid tool and yet another successful bike-related business that calls Portland (and Eugene) home.

Check it out at RideWithGPS.com.

how is this different than MapMyRide?

they have both free and paid “premium” plans with cool extra features.

as for mapmyride… that service is supported w/ ads. RideWGPS does not have ads.

A good portion of our users are paying for extra features, or solely to just support something they like. Basically they subsidize our free users. However, our free users help out by sharing the site around the internet (embedding maps in other sites, sharing on facebook etc) as well as mapping rides. The more routes mapped, the better our database becomes, meaning the easier it is to find a good ride in an unknown area.

cool. Thanks for posting this. My dad bought me a little GPS unit for my birthday and though I’ve been using it every day I have yet to upload my data to any site. Since this one is local I think I will have to give it a try first!

Ride With GPS is similar to Map My Ride & Strava, but it’s currently my favorite of the three. I like the UI, and the way you can create a route before riding it to see what kind of mileage/climbing to expect on the trip. I log all of my trips there, and even log CX races on my calendar so I can keep track of what I’ve done. The segment feature they added this year is similar to Strava’s, and has made me a stronger rider for sure.

I think Ride with GPS has more accurate elevation detail when planning a route than Map my Ride does. Not sure how or why, but Map my Ride can be off quite a bit it seems.

Yeah, another reason I don’t use MMR.

RWG is great for sharing rides on Facebook too…don’t know about the others.

RidewithGPS is miles ahead of bikeroutetoaster which I used to use. (“Used to use?” I feel sorry for foreign learners of English.)

I recently returned from a brief cycling trip in England and found combining Ride With GPS with MotionX-GPS on my smartphone to be invaluable. This combo is particularly useful for non-US travel because it can be used without enabling expensive data roaming and it doesn’t require a WiFi connection. In a nutshell, you download the detailed map of the area you will be visiting onto your phone using MotionX-GPS. Then you create your route on a laptop or desktop using RideWithGPS. Last, you transfer your route onto your phone. You can access the map at any time, with or without WiFi or data roaming and with or without your route overlay. You have choices of zoomable road and topo maps which include the Open Cycle Map data. The maps I downloaded for free showed things like Britain’s National Cycling Network, railway stations, bike shops, pubs and steep hills. By zooming in, other helpful details are shown including things like tourist information offices, water fountains, public bathrooms, campgrounds, hotels and local points of interest. Now that I’ve experimented with RideWithGPS and MotionX-GPS overseas, I’m really looking forward to using it at home.

I’m one of the users who paid for the upgraded version just because I wanted to support the people who created it. Thank you, Cullen and Zack!

I love Ride With GPS! I’ve been using it a lot this year. Love the elevation profile (with grade!) and eagerly await a mobile version for i-whatever.

I’ve been using RWGPS for almost two years now, and it is far and away the best mapping tool out there. It’s an intelligent route mapper that knows about a large number of bike routes. It automatically generates a turn-by-turn cuesheet, and automatically generates the elevation profile. Sharing the route is as easy as copying and pasting the URL, and as Lois pointed out, you can download your route to various GPS units. Another nifty trick is to use your GPS to track a ride, then upload the track back to RWGPS; you can then replay your ride and watch your icon travel the map in sped-up animation (“Oh, that’s where we paused to recover from that climb!”). You can do all of the things I mentioned with the FREE version, and the paid version provides even more functionality.

We at GSP LOVE Ride With GPS! We’ve been using their tool for several years now mostly as a way to have a solid online map we can embed on our websites. The routes + maps pages of our event websites are by far the most frequently visited and people love the interactivity of the Ride with GPS embeds. We have heard good feedback from our riders who download the maps to their computers, too.

The staff has been extremely helpful as they tool grows, expands, works out kinks. the fact that they’re local us just icing on the cake. (or whipped cream on the strawberry shortcake, if you will – a common treat at our rest stops).

We’ve tried several other mapping services over the years and this one is by far the best. Anyone remember the old gmap pedometer google map hack? It’s still around….