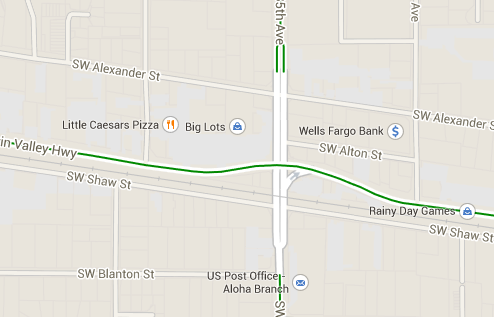 Strong turnout for bike supporters at a state open house next Wednesday could lead to major improvements to one of Washington County’s most annoying bike-lane gaps — and set a precedent for similar gaps around the region.

At issue are four blocks of road on Southwest 185th Avenue, just north and south of Tualatin Valley Highway. 185th Avenue’s bike lanes vanish as they cross the state-run road.

“This is something that we see all across the region,” Bicycle Transportation Alliance Washington County Advocate Lisa Frank said Tuesday. “There are roads that have bike lanes that are mostly complete except when they interact with state highways.”

Burnside Street at 82nd Avenue is another such spot, Frank said.

At 185th, Frank said the BTA has already convinced the state and county to make some changes when it does a planned redesign of the major TV Highway/185th intersection.

“Initially, their plans for this intersection didn’t do anything to address bike safety in this area,” she said. Now, the state and county are proposing to add continuous bike lanes on 185th Avenue southbound.

Northbound on 185th, the agencies are proposing an unmarked six-foot wide shoulder on the south side of TV Highway from the railroad tracks north. This would take the place of what’s currently a northbound “slip lane” — a dedicated, rightward-bending right-turn lane that invited cars to accelerate during turns onto the state highway. 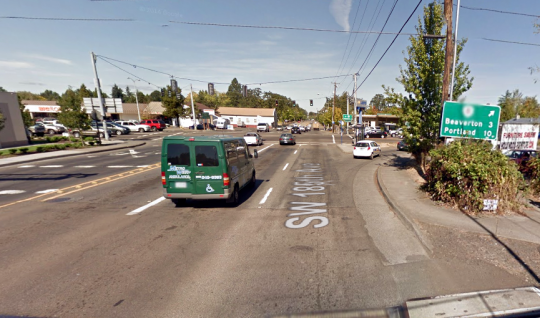 North of TV Highway as far as Alexander Street, however, and south of the railroad tracks, neither a striped shoulder or northbound bike markings are proposed. Moreover, none of the facilities are expected to offer physical protection from cars.

Frank said the BTA’s strategy will be to ask for crossbike-type markings through the area, helping make clear to drivers that bikes may be present and have the right to proceed straight across. In addition, she said, the redesign should be planned as an “interim adjustment” that leaves room for the possibility of either moving the sidewalk curb or removing one general travel lane in order to eventually create continuous physical separation for people biking.

“It’s just one block, so we should be able to figure out something,” Frank said.

She added that the area has “been on the high-crash list for a really long time.”

If the current advocacy is successful, how likely is it that the county might eventually remove a general travel lane from 185th in order to create a great bike connection? Frank said that’ll depend on the county’s vision for its future.

“185th is a major roadway,” she said. “It sees a lot of traffic. And we know that a lot of that is that people don’t have alternatives.”

The next public open house on this project is 4:30 to 6:30 p.m. on Wednesday, Jan. 21. You can drop in anytime during those hours at the International School of Beaverton (17770 SW Blanton Street, Aloha) to learn more and share your thoughts. You can also read more on the state’s project website.

Correction 2:15 pm: An earlier version of this post incorrectly described the proposed road work between Blanton Street and the railroad tracks.

Alexander has a concrete diverter at 185th that houses a left turn lane for southbound 185th traffic turning on to Alexander going east; impatient cut through traffic barely slows down for the turn. Attempting to cross 185th & Alexander here therefore is problematic and probably not strictly legal.

BUT: Alexander between 185th & 197th can be kinda woonerf-y. It lacks sidewalks in most places, those are disconnected and there are poor to nonexistent shoulders to walk on off of the road. If it is daylight or as late as 9:00pm it is very common to see people walking in the road because there simply is nowhere else. If people are walking in the road cars are usually going slower than 20mph with a posted speed of 25.

Aloha has been getting more dense; for at least the last 10-15 years large single family plots have been snapped up by developers and turned in to apartments or multiple townhouses. It is still an unincorporated area but is a rapidly urbanizing suburb to the tech giants surrounded by more dense urban areas.
The infrastructure shows the age of planning for lower density and will require extensive work sooner or later.

Yes TV Hwy is sketch for bikers and frustrating for drivers, but those are known issues and no project can fix that. Most cyclists on TV Hwy ride on the sidewalk (and it’s not even close), which tells you everything you need to know about this roadway. The purpose of this project is not to make TV Hwy safer for cyclists, but to address all the vehicle vs vehicle crashes as cheaply as possible.

Although providing a safe, dedicated space for cyclists in both directions of 185th should be the bare minimum, it’s not addressed in (or beyond the scope of) this project. The proposed plan puts SB cyclists squarely into the gutter pan, and completely ignores NB cyclists.

true, but sometimes one needs to cross TV Hwy, and 185th is one of those places to do it.

East Burnside and 82nd really needs some work. And then need to remove street parking on Burnside between 82nd and 90th. The westbound bike lane is about 2ft wide.

Props to the BTA for taking this on. Due to the rail road (and the state/county’s unwillingness to take on the RR), 185th is one of very few crossings in the area, and this is a very unsafe and uncomfortable area to bike in.

Unfortunately, there’s still room for improvement on the pedestrian part of the plan; the project covers multiple blocks and intersections for automobiles, but does not add safe crossing facilities for those who need to cross elsewhere (like 188th, where people cross to get to businesses or bus stops).

The extent of benefits for pedestrians was shared w/me via email from ODOT:

“· We’re adding 49 new LED street lights on TV Highway from 178th Avenue to 192nd Avenue and on 185th Avenue from Alexander Street to Blanton Street. This is possible through a partnership with Washington County. The additional lighting will create a much safer and visible pedestrian environment.

· We’re converting the SE corner of the intersection into a standard right angle. As it is now, people in cars traveling northbound on 185th Avenue can veer off prior to the intersection to make a right turn (to head east) on TV Highway. We’ll be eliminating that “slip lane” and square up the intersection. That will make that corner much safer for pedestrians crossing there, knowing that cars won’t be whipping around that corner.”

Safe, straight through passage on a bike, of the TV and 185th intersection, is important when crossing TV on 185th, so efforts on the part of all working towards making that happen, is good work. I figure that securing road ROW, and accordingly moving utilities, poles and what not, likely has to do with why an addition to the road’s width to create a continuous bike lane north of TV on 185th, isn’t made.

Lack of continuous bike lanes are a bad deal for everyone using the road. Bike lanes that aren’t continuous north of the light rail tracks on Hall Blvd in Beaverton, are to me, another example of this. Sure, I realize it costs a lot of money to move a bunch of stuff to create the room to retrofit all points on a road for continuous bike lanes. Long term, that type investment makes good sense.

speed is the biggest factor with these roads btw, ppl can’t slow down! lol
if im taking up little bit of lane please slow down and understand bike lanes do end.. :/

Sure would be nice if we could swing a bike highway immediately adjacent to the railroad.
You put a tall sound wall on the rail side and a continuous fence on the other side and it becomes inconvenient to use as a sidewalk.
If a sound wall was continuous between paved crossings the owning railroad company might get behind it just as a way to prevent unsafe pedestrian crossing.

Crossing the railroad by foot in that area is very common. There is a large number of pedestrians in that neighborhood and the RR crossings are very far apart ( 2/3 mile?).

Unfortunately, all the services are on the other side of the RR and HWY.

q’Tzal, a continuous off-street path parallel to the railroad was indeed specified, in detail, in the TV Highway corridor plan completed a couple years ago, but of course funding and implementation is another matter…

q’Tzal, your idea for a bike highway of sorts or protected bikeway along TV Highway is one of the BTA’s top priorities: https://btaoregon.org/get-involved/tualatin-valley-highway/. Thanks for speaking up!