A few blocks north of the spot where Southwest 4th Avenue becomes Barbur Boulevard, a five-lane city street has been slowly becoming a place for people to enjoy. A team of Portland State University students is pushing this spot to its next step.

If it comes together — the current step is a crowdfunding campaign that would raise $15,350 for construction and the first two years of maintenance — it’d be one of the first fully public Street Seats installation in the city.

Since Street Seats was introduced in 2012 after several years of advocacy by Rebecca Hamilton and others, about a dozen private shops have gotten city permits to convert car parking spaces in front of their storefronts to public seating.

The “SoMa” (South of Market) neighborhood has a line of top-notch food carts across the street from several office buildings for the university and other institutions. As described in the video above, the “SoMa Parklet Project” would give food cart patrons somewhere to sit.

But unlike some Street Seats, the idea is to make the parklets feel truly public — a place where “anyone can sit down and read a newspaper,” as city program specialist Sarah Figliozzi told the Portland Tribune last year.

Creating that feeling requires more than just park benches. Here’s the project’s budget, including two “extra” features if the effort can raise more than the minimum. 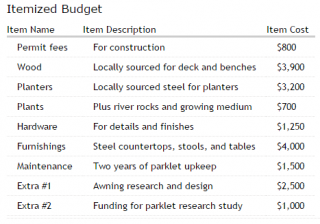 “Most people think of this district as a place to pass through,” B.D. Wortham-Galvin, a professor in PSU’s architecture school whose course “Contingent Urbanism” helped inform this project, told the Tribune. “We want it to be a place to stay.”

Correction 1/6: An earlier post incorrectly said this would be the first fully public parklet. It would be the third; the others are on Alberta Street in front of the Tin Shed and Vita cafes.

Isn’t there a large plaza directly across the street from this proposed project?

Yes, if you mean the PSU engineering building campus space on the other side of the 3 travel lane and 2 parking lane 4th Avenue.

I’ll donate if they stop calling that area “SoMa”.

Yeah, me too. I saw SOMA and thought “poo stop of San Francisco”. :-/ Not Portland k-thx.

Likely due to the fact that it sits immediately downstream from the major Interstate freeway exit for commuters entering downtown from points south.

I love this idea! It’s progressive thinking like this, one little change at a time, that makes this city so amazing. This energy to keep pressing, to keep changing the streetscape is inspirational.

paikiala
Yes, if you mean the PSU engineering building campus space on the other side of the 3 travel lane and 2 parking lane 4th Avenue.
Recommended 0

with three separate crossing points in about 400ft: two crosswalks & a stoplight

no, don’t turn the public street into personal seating for a cart-pod that isn’t even using its parking lot for customers…

how about they just turn those carts around and put a few picnic tables in the parking lot?

start citing people for blocking the sidewalk during lunch, like they do to the homeless campers…

the cart pod is great, but it’s getting a free ride using public space for its customers… same with the other cart pods around downtown, many in a parking lot facing out so the parking lot isn’t used for customers…

It’s likely the pods don’t own the parking lot, but rent space from the lot owner. So renting more space to provide a place to sit would also increase the prices of a margin business.
As the road is public space, I don’t see an issue with repurposing it to another public use and benefit from it’s current designated use. Your post implies all the benefit acrues to the businesses, but it does not. The patrons of the business benefit, as does anyone else passing by who wishes to sit.

Cool! I hope it happens.

Michael – I’d argue that Portland already has (at least) two variations of Street Seats that ‘feel’ fully public. Maybe they aren’t officially fully public, but they sure give off that vibe. Read more about them here: http://albertamainst.org/whats-happening/street-seats/

Kirk, you’re right. I heard from the city too and have edited the post. Thanks.

I believe the rules for implementation are that all of the street seats are public space. The one proposed is just also publicly funded, versus the usual privately funded spaces.

I frequent this food cart pod weekly, and it gets so much business (thousands of people/day), that during lunch hours you can barely squeeze by all the people standing and waiting in line to order and pick up their food. I can’t think of a better place in the city for a parklet!!

This TOTALLY needs to happen; people won’t believe how awesome it will be for *everyone* who walks, bikes or drives on this block of SW 4th.

Montreal is FULL of street seats; there are as many as four per block in the hip retail areas. They add incredible vitality to the street scene. If you want to attract people (and increase business!), do more things like this! If all you see are driving and parked/parking cars (and parking alone causes about 35% of downtown car congestion), then you just want to skip the area. Plus, cities (at least *real* cities) are for PEOPLE, not cars.

And who cares about calling it SoMa? Please; it’s just an abbreviation (and yes, everyone knows about SoMa in San Francisco–whatever). How about meeting or communicating with the AMAZING folks that are behind this effort? They are sooo worthy of our support!

My crack against “SoMa” was mostly tongue-in-cheek. I donated to the project despite the neighborhood name. 😉

OMG–thanks so much, Adam! You made my day! 🙂