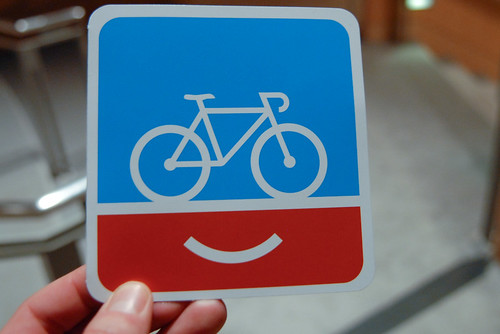 Nearly three and a half years ago, we broke the news about an ambitious campaign by a national advocacy organization to get 1,000,000 Americans to pledge support for cycling.

People for Bikes President Tim Blumenthal called today “historic.” “We are proud to have one million individuals standing behind our vision and goals,” he wrote in a press release.

Blumenthal’s vision back in 2010 was to do something that would provide a tangible illustration of the many people who love bicycling, but who aren’t members of their local advocacy group and who had never done anything to “take action to improve bicycling.” Back then he estimated there were only 250,000 active bicycle advocates in the U.S., yet over 40 million Americans who participated in some form of bike riding annually.

The petition effort was seen as a simple way to step up and be counted. People for Bikes, buoyed by a professional marketing agency, took their campaign on the road to hundreds of events around the country. With their toes dipped in many of cycling’s varied subcultures, People for Bikes was able to get the campaign in front of everyone from racing fans to grassroots activists and urban commuters.

Now that they’ve got the names, what’s next?

The goal from the start was to have one million names of support, “to speak with one powerful voice — to let policy makers, the media and the public know that bicycling is important and should be promoted.”

That “one powerful voice” will need to be very loud if People for Bikes wants to achieve their next big goal: the “5X” vision. Here’s how they describe that:

The organization will now measure its goals against a major initiative called 5X: By 2025, PeopleForBikes aims to grow key elements of bicycling in America by 500 percent. During the next 10 years, PeopleForBikes plans to increase its base to five million supporters—assembling and mobilizing a grassroots army of bicyclists with major political clout.

The 5X vision would also mean that by 2025, the total number of annual bike rides taken by Americans would grow by 5X—from 4 billion to 20 billion—by facilitating better bike infrastructure and safer, more appealing riding conditions. Additionally, PeopleForBikes will work to grow the number of protected bike lanes in U.S. cities by 5X—from 200 lanes to 1,000 lanes—by working intensively with city leaders through the Green Lane Project. PeopleForBikes envisions 5X the mileage of singletrack trails to be available for mountain biking and a leap in the number of bike parks and other bicycling facilities in communities nationwide. Finally, PeopleForBikes aims to grow public and private investments in bicycling from its current $2 billion to $10 billion.

Those are not timid goals. I like that. I also like that People for Bikes plans to cultivate a “new group of leaders” they hope will include not just the usual suspects like electeds and business leaders, but also, “media movers, celebrities, and pro athletes.” Tie-ins between cycling and major mainstream celebrities and brands (which are often one-in-the-same) is something the cycling movement has been sorely lacking.

What’s exciting is that this is already happening naturally. In the past year or so we’ve seen Beyonce take bike share to a concert and LeBron James take part in Critical Mass (I won’t mentioned what happened to poor Bono).

Bicycling is awesome enough on its own to attract big-time attention — with a national and well-funded advocacy organization working strategically on its behalf behind the scenes, we should be able to gain a lot of ground.

Can you imagine a cycling equivalent of the “Milk: It does a body good” campaign?

I often have mixed feelings about petition campaigns. While they are done to gain respect and attention, the mere fact that they’re necessary proves you don’t have respect or attention. Part of me would rather have a list of 500 powerful politicians committed to moving cycling forward than one million random people on a list; but I think in this case People for Bikes is doing solid work and I’m looking forward to seeing where this goes from here.

— Learn more about what comes next from this blog post by Tim Blumenthal. If you want a quick jolt of warm-fuzzies, check out this video they released today to celebrate the milestone:

Huh, that’s interesting. Because in October they sent me a request to renew my corporate membership and said they were at 800,000. Pretty impressive to achieve an additional 200,000 supporters in two months.

“Not timid goals”, no, but not goals that individuals can help accomplish, either. It would be nice if a bicycling interest group could come up with goals that relied on bicycling, not attending meetings, to accomplish.

People for Bikes is just the US Bike industry’s marketing wing. Their primary interest is to increase bike sales, not necessarily to make cities more bike friendly. They do very little either locally or nationally to actually improve bicycle infrastructure for people who go about everyday chores on a bike. I do not think that this organization is worth supporting.

A small quibble: the math or wording is wrong.