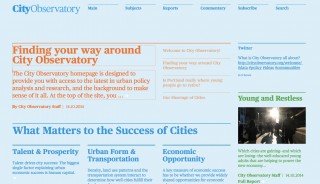 Joe Cortright, a Portland-based economist who specializes in making the case for urban innovation and active transportation and was a powerful critic of the failed Columbia River Crossing project, has launched City Observatory, a “virtual think tank” that will be “devoted to data-driven analysis of cities and the policies that shape them.”

Topics on the site will be arranged in a system of “cards,” copying a successful feature of popular news site Vox.com.

The goal of this new venture will be to spark conversations about what policies and practices will create great cities. Cortright received funding for the project from the John S. and James L. Knight Foundation.

“How we build and inhabit our cities plays a critical role in tackling national problems ranging from climate change to inequality,” said Cortright in a statement. “At City Observatory, we’re excited to participate in and contribute to the discussion of how cities can realize their potential.” 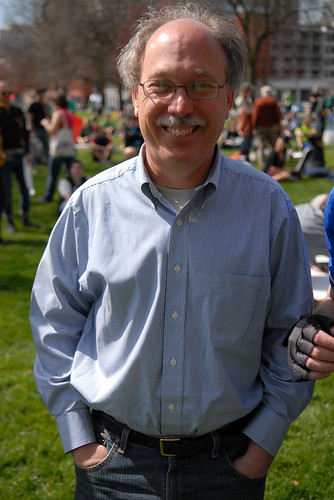 Cortright at an anti-CRC rally in 2009.
(Photo by J. Maus/BikePortland)

It’s worth noting that Cortright is strong supporter of bicycling and understands its extremely beneficial impact on many aspects of urban development. Similar to how we’ve branched out into covering real estate and land use issues, City Observatory will track data and trends in key topics that impact cycling: from housing to gentrification and industry.

The new think tank’s first report, The Young and Restless and the Nation’s Cities, is due out on October 20th.

We’re looking forward to learning from — and highlighting — City Observatory’s work. The site is already full of great content. We also plan to follow them on Twitter at @successfulcity.

I wish them the best and have already followed them on Twitter, as I follow a whole bunch of urban policy and transpo authors and sites. But someone needs to have words with them about their site design. Blue text on blue background? Green on green? I’m no web designer–just a presbyopic reader over 50–but wow, that’s hard on the eyes.

Joe: Thank you for your public service. I hope people read your City Observatory. I will.

No one brings more data and understanding to the table than Joe Cortright!
Thanks Joe for this addition to the transportation conversation!