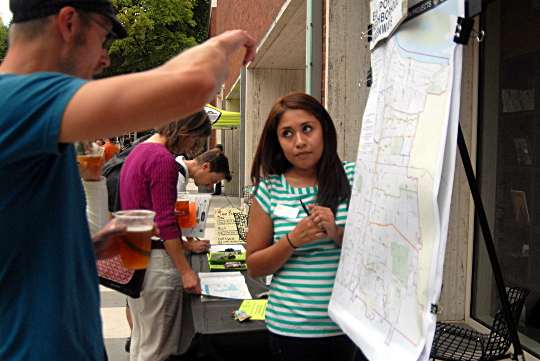 Fourth in a week-long series about the BTA’s five new advocacy campaigns.

Of the five new Bicycle Transportation Alliance advocacy campaigns we’re examining this week, the only one that’s almost certain to succeed is east of Interstate 205.

That’s because it represents official BTA backing for five new stretches of a relatively cheap, uncontroversial type of bikeway — neighborhood greenways, the low-traffic side streets that have sharrows, speed bumps, 20 mph limits, wayfinding and comfortable crossings of major streets — that are already enshrined in the city’s popular East Portland in Motion plan and already have the support of the extremely effective advocates at the East Portland Action Plan.

That’s not to say East Portland advocates aren’t glad to have the BTA’s help improving these 12 miles of streets.

“We’re just really pleased that it is on their top agenda,” EPAP Advocate Lore Wintergreen said in an interview.

Wintergreen, who managed the city’s Safe Routes to School program before becoming a full-time advocate for East Portland, said she’d been reminded of the importance of basic, safe bikeways east of I-205 when she’d been headed home via Northeast Halsey, a key east/west freeway crossing that has no bike lanes.

“In midday, so we’re talking about 3:30, I counted 15 bike riders,” she said. “And looking at the faces of those bike riders, they were diverse people.”

Five connections to the spine: I-205 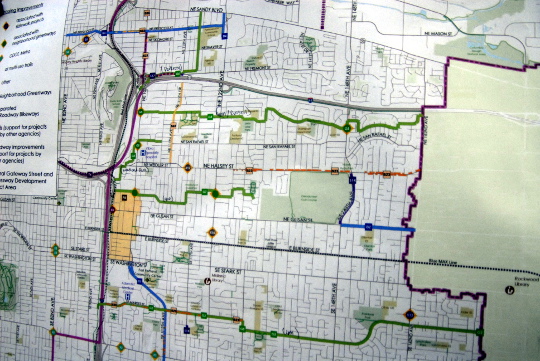 The BTA’s map of its top-priority greenways for East Portland, marked in green.

All five greenways in the BTA’s and EPIM’s sights all plug into the I-205 path and therefore the TriMet Green MAX Line. Here are the descriptions, taken from the city’s East Portland in Motion document:

Knott/Russell: Connecting NE Knott and 102nd to NE 162nd and Russell, past the University of Western States, Margaret Scott Elementary and the Summerplace assisted living community. This would include crossing improvements at 102nd, 122nd and 148th.

4M: One of the biggest missing pieces in East Portland infrastructure, this 4.2-mile greenway would run along Market, Mill, Millmain and Main from the I-205 path past David Douglas high school to the city limit just past SE 174th.

Holladay Oregon Pacific: This route weaves from Gateway Transit Center, past Winco, on the neighborhood streets south of Halsey east to the 130s Greenway and Holladay Park East. It’d include crossing improvements at Pacific and 102nd and Holladay and 122nd.

Thanks to years of advocacy from East Portlanders, the city seems to be strongly behind all these improvements: when the Portland Bureau of Transportation released a list of possible projects to be associated with its proposed street fee, these five were the top of the list.

Elizabeth Quiroz, the BTA’s lead staffer on this project, said this month that getting these projects done is mostly a matter of finding the money. She expects a wave of state support to greatly improve biking and walking along Southeast Powell; for the moment, these greenways are the counterpart to that work on the north side of East Portland. 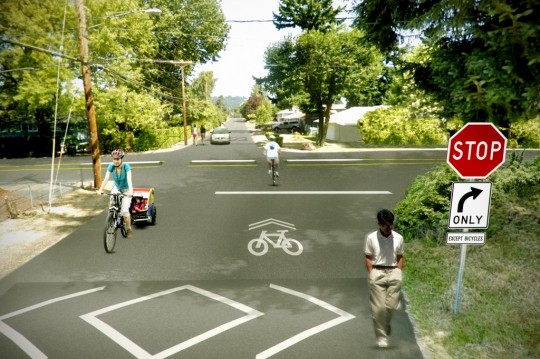 A BTA illustration of a neighborhood greenway.

Where the idea came from: East Portland neighborhood advocates wrestled these routes into Portland’s 2010 bike plan, but they’ve been delayed by the city’s decision to slice funding for neighborhood greenways. Wintergreen, the city-paid advocate for East Portland investments, has coordinated volunteers and coalition partners including the BTA to get them funded.

Obstacles: If Mayor Hales and Transportation Commissioner Steve Novick can find a third vote on Portland City Council for a street fee or similar revenue proposal that includes “safety” as well as “maintenance” improvements, these look like a shoo-in sometime in the next few years. If not, they’ll join the ongoing scramble for state and federal grants. But Wintergreen predicts that there’s a “100 percent” chance that these will all be complete within five years, one way or another.

How you could help: Contact Quiroz: 971-231-5686, elizabeth@btaoregon.org, or the EPAPbike Subcommittee.

Check back next week for the final post in our series about new advocacy campaigns.

Once these are complete, combined with the 130’s and 150’s and 100teens’s, the face of east Portland biking will be changed.

The next step of course will be to modernize the bikelane street grid with buffers and separation, but that will require road redesigns, lane or parking removal and MONEY.

So by all means, build the cheap stuff first. I definitely hope though that there is some form of DIVERSION on the “Three M’s”…..

And yes, I decided to add the “-M” to Terry D as I got married last may. I did not realize until after the fact my initials are now TDM. I like it.

Thanks..after eight years it was about time…

3M/4M is mostly on neighborhood collector streets, streets intended to move traffic between local service streets and higher classified streets. Add to this that much if it is, or will become, Major/secondary response routes, and diversion gets very difficult.

Fantastic! 5 greenways for just over $2M? Let’s get this done. I realize projects like this have been in progress for some time, but somehow it feels like the formation of Bike Loud PDX has lit a fire under the BTA. As I’ve said before, there’s room for two groups – one pushing the envelope, and one getting the nuts-and-bolts stuff like this done.

$2m seems a bit low to me. All but Knott/Russell have preliminary designs and the major crossings not already at signals will need cycle tracks with median islands and rapid flash beacons, or hybrid pedestrian beacons. Also, since paint is frowned upon as a suitable cycle track delineator, most of the jogs at major crossings are identified as wide shared use facilities, ala, Going/33rd or Division/86th, and those are pricey.

A couple gripes:
We also need better connections between I-205 and Greenways westward. I wouldn’t take much, just a few wayfinding signs/sharrows. Right now there’s almost nothing.
Also, drinking fountains along the I-205 would be nice. Preferably at the Green line MAX stops.

YES! It is a deadzone between 205 and the central city.

Oddly enough in the south, we have a few routes (SE Woodstock, Duke, and Flavel all have bike lanes until 52nd), and Foster will also help in this regard.

But you are completely right, there are not a lot of places where it is very easy to cross 82nd.

Yes! Why Tri-met can get new stations approved without drinking fountains is absurd. It seems like this should be a basic service for the population. Restroom stops would be nice as well.

Getting from the I 205 Bike path west is getting easier, but there are still some major conductive point problems. Behind Fubon where the Clinton-Woodward greenway goes to die..connecting this one up by paving the gravelly Clinton into a Multi-use-path, lined with tiny houses, and building a sound wall cut through to the Division street MAX stop could do multiple things at once.

But alas, that would take money and creative leadership!

Is there a PDF for that map? I can’t seem to find one (blame it on my little tablet computer).

I’m sorry – there isn’t. I made the mistake of deleting the larger photo I took, and the BTA doesn’t have an image file.

Quick note: the rendering at the bottom of the article (by the talented Owen Walz) isn’t really a “model neighborhood greenway.” It’s actually Monroe St. — a street with no sidewalks that we are currently working with the city of Milwaukie to transform into the city’s first neighborhood greenway. So: although the image shows a big improvement from its current state, a street with no sidewalks is not ideal.

Owen asked in an email that we just credit these to the BTA.

I don’t know much about those specific routes (yes, I’m one of those central city types), but more and safer bike routes out east would be great. Are north-south routes also needed? Maybe these bike routes, when built, will attract more bike shops to the area?

I’m glad these are happening as east of 205 is in dire need of improvements.

Where does this put the 20’s and 70’s bikeways? I know the 20’s is fairly controversial for the route, but as the fifties goes in, from what I’ve seen it’s just a bike lane in some places. Hardly can be called a ‘greenway’. Can anyone give me a rundown of the status of other greenways? I know they are in the 2035 plan but where are they prioritized and who makes the decisions to implement?

Yeah, the 50s Bikeway and 20s Bikeway were deliberately called that because they’re both a combination of lanes and n’hood greenway.

Someone can stop me if I’m wrong, but I think the 20s, 100s, 130s and 150s greenways are the only ones currently funded. The 2035 plan is just a high-level planning document; it basically exists so that in grant applications, public hearings, etc., city staff can say “this is part of the plan.” That’s why the whole kitchen sink is in it.

PBOT’s planning division, active transportation division and director make decisions of which projects to prioritize for grant and local funding.

There is also Rodney, with a POSSIBLE diagonal diverter at Cook but I only think it is only funded from Broadway to Killingsworth. There is also the sharrowed connection from 53rd and Hancock north and east to connect to Sacramento at Alameda ridge, but I do not think the hard cement infrastructure upgrades are funded…just the sharrows.

Other than this, the Active Transportation Department was gutted by the Hales administration…left with only enough to put in matching funds for federal grants. Even the ADA curb ramps budget was cut in half. In east Portland, the “Three M’s” greenway was slated for construction the year he took office as was NE 77th and Alameda/Sacramento.

Sacramento/77th is funded this FY.

This really needs to happen. Maybe they can get Fritz to vote for it?

The parkrose greenway should be prioritized. While other east portland neighborhoods have bike lanes on E-W arterials there is little bike or ped infrastructure in this diverse neighborhood.

I forgot about those terrible bike lanes. I typically ride Prescott which is simply awful.

I’m feeling a bit cynical about Greenways right now. Currently Portland is utterly unwilling to do enforcement. What is the point of 20mph signs and diverters if there aren’t any teeth behind them?

For years now, my neighbors and I have been requesting enforcement to deal with rush hour speeders and drivers ignoring diverters on our Greenway. I have pursued every avenue imaginable. Nothing. Total silence.

I think you are confusing those pointless traffic circles with diverters. Diverters block car traffic from proceeding.

No, I’m not confusing anything. Some diverters may prevent traffic from proceeding, but many merely discourage it. Look at Clinton at 39th. Those can be and are (rarely) ignored. The ones in my neighborhood at SE 42nd and SE Gladstone, can be easily driven around and are with some frequency.

Fire access is the reason Gladstone/42nd looks like it does (same design as Spokane W/13th). People like fire response to be as quick/direct as possible.
Requests for enforcement, speeding or violations of traffic control devices, should be directed to 823-SAFE, with a time of day/day of week so officers can target law-breakers. You can request contact by the officer that does enforcement. And I believe Hales oversees the police bureau (budget, resource allocation, etc).
As for ‘teeth’. The legislature sets the fines for traffic infractions, as well as how much judges can reduce said fines. Judges determine what actual fines are levied and how lenient to be.
Council, Legislators and judges are elected.
Portland’s only part in the process is the design and enforcement.

Signs and crossings. Sharrows and speed bumps are nice for calming traffic if they work, but it’s the signage and safe crossings that are at the core of bike user utility, and those are unaffected by driver behavior.