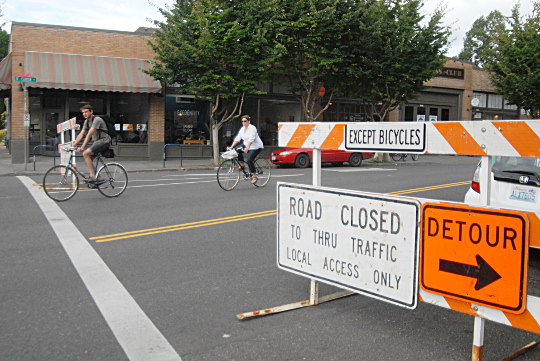 Hours before a pair of protest rides were planned to start, the City of Portland on Friday used light barricades to reduce through auto traffic on Clinton Street during the remaining week of a detour for eastbound traffic on Division.

“Woohoo!” Alex Reed, the organizer of a group of concerned Clinton Street users, wrote in an email to the group Friday afternoon. “We won our short-term goal.”

Reed’s group, which developed from a conversation on this site and held its first meeting last weekend, had drawn more than 20 riders to an earlier protest ride on Tuesday, attracting TV coverage. They followed up with an open letter asking for temporary diverters and a long-term change to city detour policies.

In a phone interview, Reed said a 4 pm ride on Clinton Friday afternoon would be changed from a protest to a celebration.

“We’re going to say ‘thank you PBOT’ and talk about the long-term goal of changing the city’s construction protocols for diversion to bikeways,” Reed said. “I’m imagining that we would ride up and down the section where it’s closed eastbound to autos to revel in how lovely it is, and then maybe go somewhere for ice cream.”

The city had initially planned to direct all Division Street traffic onto Clinton during the two-week detour, which is required because of drainage and walking improvements to Division. Last week, the city changed that plan by installing electric signs that direct traffic to Powell at 11th Avenue. But the city had until today declined to install any infrastructure on the Clinton roadway itself. 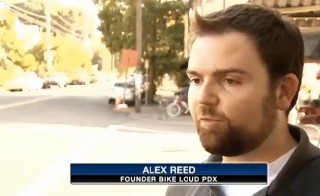 Even without the detour, Clinton Street in the 10s, 20s and 30s has been carrying more than 3,000 motor vehicles per day, which is the maximum national standard for any stretch of bicycle boulevard. Some people who walk and bike on Clinton have been urging the city to install physical diverters that prevent through traffic on what’s intended to be an all-ages street.

Bicycle Transportation Alliance advocate Carl Larson, who has been communicating periodically with city officials since last year in an effort to increase attention to bikes during construction detours, credited the group Reed organized for helping focus the city’s attention.

“I think PBOT succumbed to our ongoing pressure to improve its work zones, coupled with excellent work on behalf of a new crop of activists,” Larson said. “We hope that the city will see that it would have been cheaper and less embarrassing to do this right the first time.”

Gerald Fittipaldi, who joined Friday’s celebration ride, said the barriers “made an impact, too. There weren’t many cars on there.”

Doug Klotz, a longtime resident and Richmond Neighborhood Association leader who biked past the barriers at 5 p.m., called it a victory for street activism.

“You just need to have a bunch of people out making a bunch of noise,” he said.

For his part, Reed said that after this afternoon’s celebration ride, the agenda for the new advocacy group is to meet one week from Sunday at a location to be determined.

“We’ll probably decide on the name and a draft identity or mission statement kind of thing,” said Reed, who lives in the Foster-Powell area and bike-commutes downtown daily via Clinton. “And I would like us to start searching for the next action. … I’m hoping that the next action will be at an outlying or underserved area to show the group’s commitment to equity.”

If you’d like to connect to the group, contact Reed at bikeloudpdx@gmail.com or request to join its Google group.

Congratulations and THANK YOU to the organizers and participants on these rides. This is great.

Sweeeet! Some good news to start off the long weekend!

Woohoo! We win! I edited the Super Legal Ride and encouraged people to go to the 4PM celebratory ride! What’s next?!

Bravo indeed, to the Clinton riders!

Kudos to PBOT for ultimately making the right decision.

permanent diverters on all greenways.

ankeney has needed diverters since forever, and certainly since the burnside/couch couplet went in

paikiala
Reply to  are

While PBOT is investigating diversion mitigation on Ankeny west of the diverter at 20th, where do you observe the need for diversion? there is a diverter at 32nd. Chavez? west of 12th?

The worst issue is between 20th and 7th. Nevertheless, the popularity of 28th has increased car traffic between 28th and 20th too.

PBOT is actively working on the 12th/20th issue as part of the Burnside road diet.
Would a semi-diverter on Ankeny w/27th be helpful?

Great work! Now we just have to hope all those drivers don’t opt to detour onto SE Lincoln/Harrison.

Just rode it. Barrier was out but not in place. Still, only two cars passed me the whole way, and the only bad behavior was Idaho bikes at 34th.

they can just leave those there on the street indefinitely…

it hardly makes a difference, Clinton was still packed with cars on the evening commute tonight. Most everyone is ignoring the signs anyway, cyclists and drivers alike.

That just means the Clinton rides are not over. (By the way, how would bicyclists ignore the signs?)

The bicycles are ignoring the ‘except bicycles’ signs?

A video of the stream of cut through traffic on Aug 28th.

Ridiculous. Not one of those car drivers lives on Clinton. None of them should be on the street. None.

What a cr*ppy bike boulevard it is.

How many of the cyclists live on the street? It’s still a public right of way, and just because you don’t live on a street doesn’t mean you should be prohibited from using it for legitimate reasons. Defining legitimate is the crux of the problem. I seems like you’re lumping all motorists into one group when only a few are behaving bad.

“You just need to have a bunch of people out making a bunch of noise.”

To me, that is the Quote of the Week. I’m now seeing the genius of the name “Bike Loud PDX”.

I was out there this evening. Thanks for all who showed up. However, I wish that many more of you BikePortland readers showed up.

It’s without doubt, easy to not make an effort for an endeavor like this. I know that it took myself a concerted effort to ride out there. But, we need greater participation and representation of each and every one of you. No, not each and every time, but be out there when it may take effort and inconvenience you.

Even if your efforts lie with pen & paper or email. All is cumulative.

Don’t let complacency and idleness frame our future of bicycling in Portland and surrounds.

Well this is great news to see, it worked! What’s next?

“What’s next?”
a local gas tax from Novick & Hales.

are
Reply to  are

above was supposed to nest under youtube of cars on clinton

Biked it today with my kid. Was nice.

yes, “somebody” did. because the original position of the barricade didn’t stop anyone.

Woo! Thanks for listening and taking safety into concern, PBOT!

Now, who’s got some epoxy glue to make the barriers permanent?