ODOT cross-section drawing of what’s coming to N Denver between Victory and Schmeer.

Back in October we shared an early look at the Oregon Department of Transportation’s plans to revamp several paths and roads just north of downtown Kenton. That project, what ODOT calls the OR 99W: N. Victory Boulevard to N. Argyle Street Improvement Project, is now fully designed and is set to begin construction this fall.

N Denver Avenue is the main focus of the changes. It’s a vital connection between the growing Kenton Neighborhood and many popular destinations. With recent new additions to 40-Mile Loop path along the Columbia Slough, the ever-popular racing and other attractions at nearby Portland International Raceway, and two major shopping centers nearby, this $4 million project will have a significant impact on many people — especially those of us who ride bikes.

Highlights of the project include:

A new off-highway, 10-foot wide shared-use path thatwill go from Victory Blvd (near the TriMet Park & Ride at entrance to PIR) all the way to Schmeer Road. Currently the northbound transition from Denver Avenue to Schmeer is a rarely used section of the road with pavement that’s in terrible shape. ODOT plans to repurpose that road and make it open only for walking and biking. It will connect folks directly from Denver onto Schmeer or to the new path on the Columbia Slough levee. 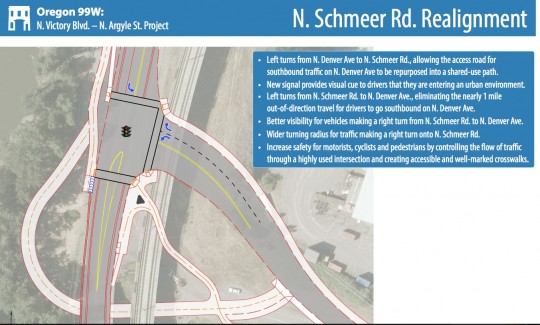 Also at the Denver/Schmeer intersection, ODOT will add a new traffic signal. This will benefit bicycling conditions by helping to slow down speeds in what is currently a location where many people drive too fast. 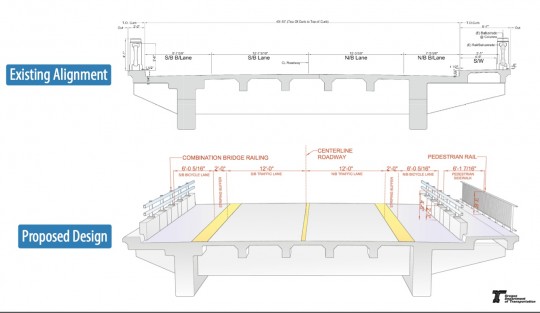 North South of Schmeer, on the bridge viaduct between the slough and N. Argyle, ODOT will re-stripe the traffic lanes and rehab the bridge structure. The standard lanes will be 12-feet wide (about a half-foot narrower than they are now) and the bike-only lanes will be six-feet wide plus an additional two-foot “striping buffer”. The sidewalk on the east side of the viaduct will also be improved by the addition of a new railing to further separate roadway traffic.

It’s important to note that this construction will come with significant detours as roads close and traffic is re-routed away from the area. You can check current detour plans on the project page and we’ll keep you posted on the specifics as construction gets underway (follow us on Twitter @bikeportland for the latest).

Construction is estimated to be completed by fall of 2015.

Glad to see improvements made here. My partner and I like to walk the Slough trail near PIR, and I usually take yellow line MAX there. It’s a terrible walk – no sidewalks, having to scramble around bushes and shrubs… It makes me feel like a second class citizen being on foot around this area.

Correction: the viaduct is *south* of Schmeer. That really tripped me up.

WRT the undercrossing, I’m wondering how that “rarely used section” has pavement in “terrible shape” and whether they consider that good enough for bikes.

Speaking strictly for myself, I’d rather see them improve Whitaker instead of building the off-street path. Destinations like Expo Center and PIR are quite secondary to Delta Park, Hayden Island, and Vancouver.

While certainly an improvement over existing conditions, I wonder if a better design could be easily implemented here. Space from oversized 12 and 14 foot automobile travel lanes could be dedicated to bicyclists and pedestrians. With 5-8 feet of extra space you could easily create wider Dutch-style protected bike lanes of sufficient quality that you no longer need a shared-use path, thus providing pedestrians with dedicated space. Narrow car lanes would also discourage automobile speeding, improving safety for everyone.

No. Bad idea – this stretch of Denver sees significant truck traffic going to the freeway, and the additional lane width is necessary to allow commercial truck traffic.

This is much needed. I frequently see families with kids on bikes trying to negotiate this area to get onto the dike and I hold my breath until they’re safe.

During the construction phase getting north from Kenton by vehicle will be a bit of a nightmare. Guess we’ll have to go south to Rosa Parks and onto the freeway from there. Well worth the temporary inconvenience.

My daughter were up there today to go swimming and see the fireworks over the Columbia. We took the long way around on the way out — Slough trail to Peninsula Crossing to Marine Drive Trail — and the MAX back.

The detour on the way out made a nice mellow ride (we saw red-tailed hawks by PIR), but this connection would have been great for a quick trip home — it looks from my map that there’s already a separated path from Delta Park MAX to the Expo Center, and this is the last missing bit?

Coming up the ramp at Denver along the Slough trail was scary. Wrong way, blind curve. I’m glad they’re reworking that. The pavement was much better there than on trail by PIR!

Now what are we going to do about the missing section of the Marine Drive Trail between 13th and 33rd….

Why do they need a traffic signal when you can ride under the road?