What’s it like to drive a bus in a city full of bikes?

The first commenter we’re highlighting in our new weekly feature, TriMet bus operator Dan Christensen, explained a little bit of the experience beneath our post this week about an alleged bike-bus collision at a Milwaukie bus stop. 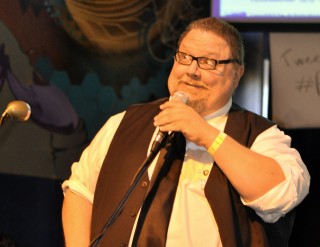 As a bus driver I can tell you that way too few of the busses have cameras that would have showed this incident. I won’t bore you with model numbers and cameras I will just generalize and say outside backward facing cameras are only on the news busses in the fleet.

As a driver I have given up on the pass and pull over maneuver if it’s under a block. First I don’t think it’s safe, tracking my own observations I realized that it’s fraught with a high frequency of Bus V Bike encounter. I also don’t believe it saves much time. Sure it may seem faster but then you have to wait for cyclist to pass your bus and clear a safe distance.

So if it’s under a block I just bang back and go slow until I can make my stop.

There is no policy at trimet regarding the proper way to do this but I use the one block rule and it keeps me safely away from B V. C encounters.

Some cyclist think I’m trying to shame them. hanging way back and going slow. Most understand and many speed up when they hear me back there waiting. You cannot make everyone happy as a bus driver but you can strive to make everyone safe… Keep doing a good job Portland Cyclist.

Longtime readers will remember that Christensen (like many bus operators, probably) has sometimes had a complicated relationship with bikes but works hard to call these things as he sees them while being conscientious about different perspectives. That’s why we were so glad to see him sharing his perspective on this incident.

Thanks to everyone for another week of excellent comments and productive conversations.

Kind of incredible that in a city like Portland TRIMET has no real policy on this. I mean we are having to design roads with this in mind, and they aren’t even educating their drivers on it? Weird.

There’s policy, and then there’s recommended procedure. I don’t think you can have a blanket policy about staying behind bikes because there will be cases (like Williams currently) where you have to signal and pull over and force the bikes to yield because otherwise there would be no opportunity to stop.

So, the policy is to signal intent and enter/cross bike lanes with attention to the safety of all, but bikes legally must yield to the bus signal like all vehicles are required to do. But, there are different procedures. In the case of one or few bikes in the lane- what Dan is doing is the safe procedure. In the case of a steady stream of bikes, signal- look for bikes to yield pull to curb is the safe procedure.

this would bring traffic to a standstill…

Poorly written law leaving judgement in the hands of those who often choose to laws as a weapon against the populace and who also generate revenue that directly funds them through citation based on their own on the spot interpretations of said law?!?!?!?

And isn’t that one of the main reasons they are moving bikes to the left lane on the new Williams design?

It is. whenever two conflicting uses get to a certain level, separation is one of the best ways to reduce collision potential.

Does TriMet have a policy that recommends drivers stay within their lane when passing bicycles or is this just the SOP?

That is exactly the right thing to do.

Any vehicle that pulls next to or slightly in front of me and puts on its turn signal is threatening to hit me. That’s just impolite and unneighborly.

I’m curious, then: what formal training and procedures are Trimet drivers given about interacting with bikes?

I’m really curious about this as well.

I am very cautious about riding near buses and will never ride alongside one unless I can pass and stay ahead of it subsequently, and I think I’ve figured out how they are supposed to drive with respect to bike lanes but I’d be curious to know what the policy is.

You have to be so very cautious if your speed is causing you to overhaul a TriMet bus – regardless of whether it’s in a bike lane on the right or taking lane on the left. Even when they don’t have a stop ahead I’ve had them wander into the bike lane frequently. Heading onto the Hawthorne bridge (SE 7th on and SW 4th on) and climbing Jefferson up from about SW 4th past the overpass are all spots I’ve had issues.

I went through the entire Trimet bus driver training program a couple of years ago, so I can answer this question with some accuracy. We received dozens of hours of training for interacting with bicycles–both classroom and hands-on driving. We reviewed all of the laws, we discussed situations, we watched accident videos involving bicycles/buses, and we had days and days of actual bus time–both observing and driving–with our trainers where we interacted specifically with bicycles. In the latter days, we took routes that were heavy with bicycle traffic, such as Hawthorne and N. Williams, so that we could apply the classroom instruction to actual situations with our trainer(s) present, and then we would later discuss those experiences together in the classroom.

When you’re steering a 20-ton 60-ft steel mass among 200 lb. fragile bodies, you are keenly aware of the potential for nasty carnage. I had nightmares about killing people. It’s not something you take lightly as a bus driver, nor is it something Trimet takes lightly. Their driver curriculum on bicycle interaction was exhaustive.

Is this more recent? Sounds a little different from the (albeit very vague) description Dan gives here.

the best thing any motorist can do when overtaking a cyclist is to slow down and wait until you are sure it is safe to pass. Don’t tailgate the cyclist either; just follow at a safe distance and protect them from the rest of the motorists following behind you (if any..). It’s really not that hard to do and doesn’t really cost any time either.

This is exactly how I expect a professional to behave. Kudos!

In general, I’ve found that bus drivers on the several routes that parallel the NE Multnomah bikeway follow Dan’s procedure, and I always feel like I have a good understanding with them. They slow down behind me, I try to speed up a little till I’m past the upcoming bus stop, and everything feels safe and reliable. Thanks, Dan, for letting us know that you consider it a best practice, too.

I rode up on a #70 bus at the stop in front of ADX on SE 11th with the light red, so I waited at the light just in front of it. I sped out into the intersection as soon as the light turned green, and the bus operator immediately changed lanes. For a couple of blocks he struggled to pass me on the left, and finally did right as he had to stop at Belmont. Of course, the driver pulled over right in front of me, and then the light turned red. I had intended to take a left on Belmont, but it was very complicated to pay attention to a bus struggling to pass me and the rest of the traffic annoyed by the bus in the passing lane, so I just rolled past the bus, dismounted and crossed SE 11th, waited for Belmont traffic to pass and jumped in.

I have a New York State Class B Commercial Driver License with a passenger endorsement, which I earned prior to being stationed in Germany as a servicemember. In Germany, it is assumed that every motor vehicle operator understands the motor vehicle laws, and all applicants must pass extensive tests to prove it. Many people lose many thousands of Euro (it is very expensive to learn to drive in Europe) by failing. It is not a given that everybody passes, and the Führerschein (driver license) is a privilege. Many servicememebers (most?) do not pass on the first try (I did!), because most Americans do not understand or know traffic law in any way; they only know what their parents and years behind the wheel taught them. I see this everyday on the roads in America since I returned to the US in 2012.

As a cyclist, I am routinely upset by the willingness of some motorists to invent new traffic laws and yield to cyclists when they do not naturally have the right of way. It confuses the issue of whether the bicyclist is a protected class of roadway operator, and it is confusing enough already! For example, the signs that warn that cyclists often cross an intersection are often combined with pedestrian crosswalks, and these are often at streets which have no stop sign for the traffic, but do for the cross street (there’s a couple of them on SE 11th). If I didn’t know any better, I would assume that cyclists are afforded free passage by the sign, but I would be wrong. The problem is this sign looks confusingly just like the sign which does indeed afford pedestrians free passage at a zebra stripe crosswalk on streets with no stop sign. Why create new signs which confuse drivers who already don’t understand fully what they are doing?

I appreciate cycletracks when they separate auto traffic from cycle traffic, but any other option is just more confusing to motorists and adds to their resistance movement. I would rather have 10,000 informed motorists than one bike lane.

I would expect that bus drivers are a higher class of motor vehicle operator that is immune to whimsy and driver ignorance, and follows the law and Trimet policy, but apparently it’s not the case.

All States should reinstate the written driver test every four years. Seems like only a Federal mandate will accomplish this.

limit busses downtown! they mix street car,busses,and bikes,peds,cars. nightmare… when I moved to BUS only lane only to avoid a crash the driver was mad at me. but it like keeping the flow with traffic sometimes pausing or stopping is what gets you killed. just my 2cents

I would love a semi-regular series of guest columns where the authors are people whose jobs have them on the road for much of the day: bus drivers, MAX drivers, taxi drivers, bike messengers, etc. I think their perspectives would be enlightening.