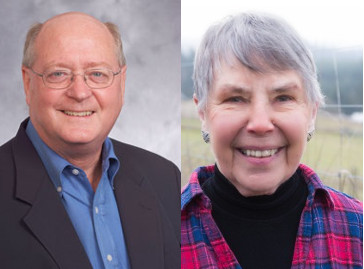 The cultural divide between Portland’s increasingly low-car-friendly inner suburban voters and its more auto-oriented exurban voters was visible in many of last night’s elections.

In Milwaukie, an inner Southeast suburb that a few years ago was locked in a battle over light rail, about 54 percent of voters turned down a chance for a protest vote. They also helped send their relatively liberal former mayor, who pushed light rail through, back to a seat on the conservative Clackamas County Commission.

Paul Savas, a moderate conservative on the Clackamas County board, also narrowly turned back a challenge from a conservative Lake Oswego city councilwoman who called him a light-rail lover.

Washington County Chair Andy Duyck, who had (along with the county’s homebuilding industry) aligned with Terry and against Malinowski, thumped his own challenger in a countywide vote to ensure a continued majority in Washington County’s leadership for expanding the urban growth boundary to make room for more suburban housing. 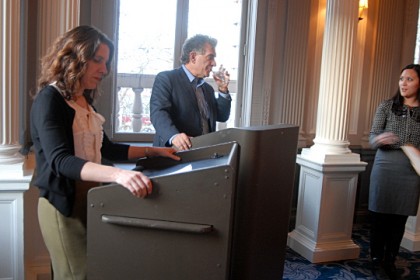 Five-year Multnomah County commissioner Deborah
Kafoury, left, will become executive chair of the agency
that runs most of Portland’s bridges.
(Photo by M.Andersen/BikePortland)

Kafoury, who mentioned in February that she recently began bike commuting, predicts that someday (though probably not on her watch) all the bridges will be tolled.

A Portland ballot issue that would have removed sewers, waters and stormwater drainage from city oversight, and might have created a new obstacle to combination storm drainage/traffic-calming projects, was rejected by 72 percent of voters.

In the state legislature, Speaker Tina Kotek (D-North Portland) was one of many Portland-area incumbents who defeated challengers or won uncontested races. Gov. John Kitzhaber also thumped a token opponent in the Democratic primary with 89 percent of the vote, setting up a fall race against state Rep. Dennis Richardson.

With no directly bike-related questions on the ballot or at the heart of local politics, and Portland Transportation Commissioner Steve Novick partway through his first term, it was in many ways an off-election for local bicycle issues in particular. In an interview on Tuesday, Bicycle Transportation Alliance Executive Director Rob Sadowsky said his organization is weighing its options for moving more deeply into electoral politics against the need to dedicate its time to lobbying around a major state transportation bill expected in 2015.

“We’re looking at everything from voter registration to potentially creating a new 501(c)4 entity that would allow us to endorse more qualified candidates,” Sadowsky said.

Rob Nosse won the Democratic Primary in House District 42. A heads up to everyone: he won union endorsement in part because he supports the CRC. Now, to be fair, he’s a liberal Portland Democrat in every other respect that I can find, and I think he’ll be a fine Rep for me any my family. But his support for the CRC made me vote for Teddy Keizer, who is a really nice guy and surely on his way up in politics, no matter that he lost this particular election.

I thought the CRC was dead. Is it being reconfigured?

By all indications, the plan that was known as the CRC is mostly dead. But there are still lots of people and institutions in favor of one or more of its components (freeway widening, rail extension, bridge replacement), so the issues are still going to be important as we head toward the 2015 state transportation bill mentioned above.

Officially CRC is dead, but not many of us will be surprised if it comes back from the dead in another form.

I voted against Rob Nosse and Jules Bailey precisely because they are pro-CRC (and one other criticial issue on which I disagree with both of them), but I’m not surprised they both won. Will just have to keep an eye on them both. I voted for Teddy Keizer because I really like him, but I wish he’d pick elections where he has a better chance of winning.

I’m very surprised no one was talking about this. We got a flier in the mail about him pushing for CRC if elected. Really? In inner SE this is the guy we elect?

This was a closed primary, correct? I’m not registered with a party and didn’t have any of these primary races on my ballot. I’m guessing it was closed to party “members”?

Unfortunately, Oregon has closed primary elections. Unless you register for one of the 2 main parties, you don’t have a chance to significantly influence the primary results. And in many parts of Oregon only 1 of those 2 parties is likely to get elected in the general election.

Yes, seemed like (based on the booklet) that the R’s didn’t even field a candidate for many Portland races.

When I lived in Washington I registered as Independent because I didn’t want to be associated with a party, and the state (at the time) had open primaries where I could still vote.

When I moved to Oregon I declared myself Pacific Green because that party was closest to my positions on the issues. But I quickly realized I was doing myself more harm than good that way, so I reluctantly switched to Democrat so I could vote in the primaries. That’s a big reason why I’d like to rein in the power of the two main parties (actually, political parties generally) and open things up more.

I lived in WA when it was open as well, and it was pretty nice.

Anyone with an IQ of at least 10 can see that our exploding urban population is going to push people out into the suburbs, people that are either going to crowd the suburban roads in their cars or crowd public transit, and opposing rail/transit projects now is going to make the retreat to the suburbs unmanageable. It’s a shame we couldn’t find more politicians with an IQ above 9 to elect.

What I read from the tone of your comment is that everyone wants to live in the city, but if they can’t afford to then they are forced to live in the suburbs and drive cars. But yes, I agree: foresight in transportation budgeting and planning is always necessary.

Nicholas Caleb’s 17% against incumbent Saltzman’s war chest is plenty respectable in my book but in any case, in the words of Granpa on May 19, 2014, “Right F’n On that he is stepping up,” more power to you and may you run again.

Calling Milwaukie’s former Mayor “relatively liberal” is hilarious. He’s is pretty middle of the road when compared to liberals in Portland or elsewhere, and some folks might even consider him a Democrat in name only.