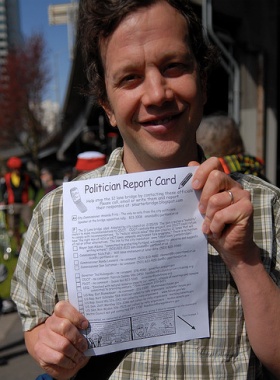 Rowe create and distributed these “Politician
report cards” at an anti-CRC rally in April 2009.
(Photos by J. Maus/BikePortland)

Rowe is an outspoken critic of the Columbia River Crossing (CRC) and he plans to use Kotek’s record of support for the controversial project against her. Kotek was the lead legislative proponent of the CRC when it flew through the legislature last year.

“She’s lost a huge opportunity by going against many of her constituents,” wrote Rowe in a statement about his candidacy. Rowe also accuses Kotek of being too cozy with corporations, not doing enough to stop coal exports, and not supporting the “Health Care for All” bill when it came up last session.

At a campaign kickoff party last Friday, Rowe featured two veteran activists who helped stop the Mt. Hood Freeway: Jim Howell and Ron Buel (both of whom have been profiled on BikePortland).

While many voters are tired of the fight that has been waged over the CRC project, it’s likely that talk of pushing some type of bridge replacement and highway expansion will ramp up again considerably in the coming weeks. Later this month a state legislative committee is set to vote on Oregon’s next step on the project.

In addition to his citizen activism, Rowe is a father and teacher who can often be found riding his cargo bike around Peninsula Park. You can learn more at ElectJoeRowe.com.

I’ve got to agree with Mr. Rowe. On these particular points, Tina Kotek has been a major disappointment.

Let’s look at Rep. Kotek’s woeful priorities in order of appearance in 2013:
1) Nike 30-year tax cut
2) Funding for the economically & environmentally counter-productive CRC boondoggle (just one more dart aimed at the heart of Oregon’s land use laws)
3) Failing to support and letting the Health Care for All (HB2922) languish
4) The Monsanto Protection Act
5) Intel 30-year tax cut
All these bills that Tina Kotek championed and arm twisted for were written with emergency clauses so citizens could not use their constitutionally fought for and granted Referendum procedure. Way to go for democracy in Oregon, not!

Seems to me, the State of Oregon could really use a different person as Speaker of the House (even though it won’t be Joe Rowe should he take her seat).

District 44 could certainly use a representative who is not so focused on favoring the .01% who don’t live anywhere nearby or care to do anything more than further exploit it and it’s people.

At one time Tina Kotek had better priorities when it came to her service to the people of Portland and Oregon but she has lost touch with what matters most. She has earned a lot of support, some of it well deserved so Joe will have to “Rowe” hard to win this one 😉 – GO JOE ROWE!

So does he have a campaign platform, or is he running on a single issue?

So he’s running a single-issue campaign then?

Todd, seems like there are at least four issues listed in this article alone. Which one are you referring to?

Plus the article notes Rowe’s positions that Kotek is too cozy with corporations and that she should have supported the “Health Care for All” bill.

I would LOVE to see a televised debate between Joe and Tina.

Way to pull out the father card (aka Straight white male) over an out member of the LGBT community. For someone who is very outspoken on how things are perceived, you seem to be saying Joe is a better person than Tina because he is a parent. What a classy move.

Speaking of classy. Looks like Joe did not gain any fans while he was a teacher. http://www.ratemyprofessors.com/ShowRatings.jsp?tid=1473577

What’s up with all the straight white males in Portland wanting to be victims because they choose to ride a bike?

Chris I
Reply to  Itgoesbothways

What the heck are you rambling about? The statement at the bottom of this article is a standard background blurb that is commonly used on this blog. You sound incredibly racist and biased, bringing up his gender, race, and sexual orientation for no apparent reason. Why can’t we just discuss the issues?

I guess we are coming from different places. My perception was not at all that the author was saying Joe is a better person than Tina because he is a parent. Being a parent is not restricted to straight white males. Being a parent does not make you a better person than a non-parent, and there is nothing in the article to suggest it does. Nothing in the article that I read portrayed Joe as being a victim of any kind.

Apparently Mr. Rowe had only five students at PCC, or perhaps he had only five disgruntled students? It’s hard to say with the information available.

Joe can’t help being white, or male, or straight. On the other hand, apparently Ms. Kotek, who is a fine person otherwise, cannot help building a $4 Billion bridge on our credit, or deregulating GMOs, etc., etc. And that Emergency business is pretty appalling. She has lost my vote.

Chris I
Reply to  Robert Burchett

We should always judge our candidates based on anonymous internet reviews on a website that includes a “hotness” rating for professors.

Speaking as an openly gay white male (who happens to ride a bike), Tina Kotek has been a very strong advocate for LGBT issues in the state of Oregon. No doubt about it. I have appreciated her hard work very much.

You are correct, though that it does go both ways. Just like I cannot get behind her support of the CRC and her Monstanto Protection Act.

As far as the father issue, Jonathan would not hesitate to mention Tina’s family status if she was being profiled. Furthermore, where in this article does it even mention that Tina Kotek is a lesbian? The only reason I know she it is because I read about it in the local gay press.

By all means, vote your conscience. Let’s just fight the real enemies when it comes to homophobia.

I only mentioned this because J Maus threw in this fact about Joe. J Maus has had plenty of critiques about how facts are presented in Portland (especially involving people on bikes). I was just trying to point out how him saying Joe is a father has nothing to do with his platform (which is something I agree with).

No, there was no mention of Tina’s personal life in the article. But why is Joe being mentioned as a father, this has nothing to do with the CRC? I don’t know anything about Tina’s life other than she is a daughter to someone (and quite possible more).

Wow, this is the first time I have ever been called a racist and biased. Who knew you could be racist against you own race? No wonder this site is seen as a joke.

Chris I
Reply to  Itgoesbothways

“What’s up with all the straight white males in Portland wanting to be victims because they choose to ride a bike?”

You sound racist. What if I said:

“What’s with all the straight white females in Portland wanting to be victims because they choose to wear short dresses?”

“What’s with all the LGBT white males in Portland wanting to be victims because they show affection in public?”

Gotta say I disagree with you here. Maus put in one sentence about Rowe’s life outside of politics hidden at the end of a multi-paragraph story about Rowe’s candidacy. The fact that Rowe is a father is undeniably a huge fact in Rowe’s life and it only makes sense to include it if you’re going to include anything about Rowe except for his positions and political history.

Your assertion that mentioning being a parent favors straight people over LGBT people makes no sense to me. I know tons of LGBT parents. I am gay and plan to be a parent in a few years. When I’m a father, if someone writes a profile of me that’s longer than a paragraph for some reason, I would almost expect them to mention that I’m a father.

For all we know from this article, Joe could easily be gay! In this day and age, his sexuality is pretty unrelated to him being a father. And in some circles in Portland, your sexuality is less relevant to your identity than your parental status, occupation, etc. I know that’s true for me.

Thanks for all the tough questions. My platform will be out soon. I am working with experts in the movements of the CRC and Heath Care for All Oregon. We are drafting a full platform. I want to offer educational criticism of the current lawmakers and their actions, and offer REAL and progressive alternatives that put people before profit. My opponent is Pro Monsanto, Pro Freeway, pro massive DEBT, and often silent when her fellow progressives (23 of them) are vocal about human rights like heath care.

I urge all people to put their lawmakers in their cell phone address books and ask them for their platform for 2014. And join myself or your candidate of choice in offering complains and reformations.

Look up your lawmakers here
http://gov.oregonlive.com/legislators/

Call, Please call me and your lawmakers.

If I lived in House District 44, I think I’d stick with the governing wing of the Democratic party. Others will cast their votes otherwise, no doubt.

This will be my last post on this site ever.

I only pointed that sentence because J Maus in this post: http://bikeportland.org/2013/12/19/bicycle-rider-hospitalized-after-northeast-portland-collision-98896
he had a problem with one sentence about the fact there was a stop sign at the intersection where the person on the bike was hit in the police report. That seemed to be fine with most of the people on this site with his point.

I was just doing the same thing pointing out I had a problem with just one sentence in the whole posting. But as expected, if you disagree with anything on this site you will get slammed.

There really is no difference between those who comment here and those who do on the Oregonian.

If you have a problem with the way Jonathan uses language, please email or call him directly. Your first comment did not add to the conversation. I am sorry if you perceive this as “getting slammed.”