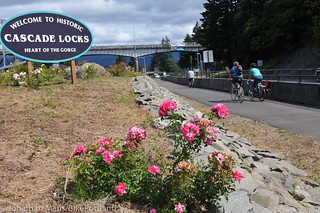 As bike tourism booms in and around Mt. Hood and the Columbia River Gorge areas, there’s a growing interest in transit service. With a reliable way to integrate transit into a bike trip, people can reach destinations that are further away and complete longer loops — all without the hassle and expense of using a car.

Earlier this year we reported on new bus service in Sandy that offers access to Timberline and other Mt. Hood destinations. Now a transit option on the Washington side of the river is set to expand, offering great promise for people looking to access the Gorge, Cascade Locks and more.

As reported by Terry Richard in The Oregonian, the Gorge West End Transit Bus (or “WET” for short) offers service from Fisher’s Landing (just 15 miles northeast of downtown Portland) to Carson, Washington. The WET already runs Monday through Friday and will expand to seven-day-a-week service on May 1st. In addition to the weekend travel option, the other great news for bicycle riders is that the buses are equipped with bike racks, and Richard says they’ll even accomodate some bikes inside the bus if the racks are full.

The Skamania County public transportation website has full details and has just posted the full seasonal schedule. Fares are just $2 one way.

If you can get yourself to Fisher’s Landing — which is just three miles east of the I-205 bike path on the Washington side — you can take the WET bus to Bridge of the Gods. From there, you can walk or ride (be advised that while the future might hold improvements, riding on Bridge of the Gods is pretty sketchy) over to Cascade Locks. From there, you can hop onto the newly improved Historic Columbia River Highway and enjoy a fantastic, 50-mile ride back into Portland. Or you can head east to Hood River or The Dalles and embark on any number of riding adventures.

Gorge Transit Link, the same provider that offers the WET bus, also runs Columbia Area Transit (CAT), which offers service from Portland (via Union Station) into the Gorge. Unfortunately, that bus only runs on Tuesdays and Thursdays with an extremely limited schedule.

When we recently reported on all the great riding in The Dalles, many readers lamented the lack of good transit option on the Oregon side of the river. There used to be Amtrak service on the south side of the river, but it’s no longer in operation. The Dalles Mayor Stephen Lawrence told us he’s in support of re-booting Amtrak but he’s not too optimistic at the prospects given how crowded the rails have become with oil trains and other freight shipments in recent years.

Lawrence said Greyhound bus service is a possibility, but they’ve been, “very difficult to work with” because they are asking for too much local subsidy. “It was discussed last year whether they wanted to continue to stop here,” Lawrence said, “I think there would be users of alternative transportation forms if it was a priority with the state, the federal government and the providers.”

For more information on the WET bus service, call Skamania County public transit at (509) 427-3990 or check out their website.

I road the “WET” in the mid 2000s for a year or so. It was a great service then. With only a few key stops along the way it is only marginally slower than an automobile. I highly recommend it.

Looking forward to my ride out to Cascade Locks and back this week. 😀

Quick point of clarification: Columbia Area Transit (which has bus service between The Dalles, Hood River, and Portland) and Skamania County Public Transit (which operates the WET bus service along Hwy 14) are both participants in the Gorge TransLink Alliance. However, they are separate transit providers. Columbia Area Transit is operated by the Hood River County Transportation District, while Skamania County Public Transit is operated out of the Skamania County Senior Services office.

Also, Columbia Area Transit’s bus to/from Portland has stops at the Gateway Max Station, Portland Art Museum, OHSU, and Clackamas Town Center. It does not stop at Union Station in Portland, but it does connect to the new Park & Ride at 224 Wasco Loop in Hood River, and the end of the line takes you all the way to downtown The Dalles.

Lastly, Greyhound currently has daily service between Portland and The Dalles.

Thanks for highlighting the new weekend transit service in the Columbia Gorge!

The big issue with Greyhound is that bikes would need to be boxed. The other transit services have bike racks, no boxing/disassembly required.

Which of these services have you employed Scott?

I have not ridden the WET or CAT bus routes as of yet, though I have utilized The Link Public Transit in The Dalles, if I understand your question. However, I have spoken with several people who consistently use the CAT bus to travel between Hood River and The Dalles during the week, and use the WET bus between Vancouver and Stevenson to access employment opportunities.

We’ve used CAT from PDX to Hood River via MAX. There haven’t been bikes on the bus when we’ve taken it, but there’s room for a few in the back. We’ve just had our dogs and luggage. They’re good about schedules and call you back promptly to answer questions – I just really wish they ran more days/times.

Also, *IF* you have a folding bike you may also be able to take advantage of Amtrak’s Empire Builder service on the north side of the river, connecting Portland and Vancouver with Bingen, WA (across from Hood River), Wishram, WA (between Dallesport and Maryhill) and of course points east.

It only runs once per day – IIRC the eastbound train stops at Bingen sometime in the early evening, and the westbound return is somewhere around 7am – but it could work for some people. I have toyed with the idea of taking the Friday train out and doing a 2-day tour, returning early Monday morning. The RV park in Bingen has nice tent spaces, or of course there are numerous other options for the more credit card oriented tourers.

Other than timing, the big catch with the Amtrak option is that the Bingen stop does not have baggage service, so I assume you won’t be able to get a full-sized bike on and off; only a folding bike that you can carry on.

The schedules have changed. The eastbound Empire Builder (from PDX) gets into Bingen-White Salmon at 3:15 pm, the westbound (to PDX) gets into Bingen at 9:30 am. Indeed, there is no baggage service at Bingen (or Wishram, the other Gorge station, about 10 miles east of The Dalles) and the Empire Builder has no “roll-on” service. So by the letter of the rules, only a folding bike can get on or off at Bingen or Wishram. You might be able to “sneak” on a full-sized bike at Bingen back to Portland if you find a sympathetic conductor. Highly doubt Union Station would do that.

Neat! Thanks for the heads up! And I love hearing about all the other possible routes from commenters, too.

As the weather gets better it’d be cool to see a post in bikeportland about the great connections to and from the Oregon coast via the north by northwest ConnectOR county bus alliance. (nworegontransit.org).

I’ve been cruising the Tillamook bus system (tillamookbus.com) to and from the coast via the downtown Union Station stop for years and I love it. Its $20 round trip to Tillamook, then $2-4 to Cannon Beach or Lincoln City. Along the coast drivers will drop you off almost anywhere along the route. When I need to get out of Portland and camp in the Suislaw National Forest, etc. its a no-brainer. Its an awesome resource for car-free Portlanders and seems under-utilized in my opinion, rarely do I see bikes on the bike racks. Whats more, if your just going to Banks (to session the Vernonia rails-to-trails) via this bus its free! You can’t beat that.