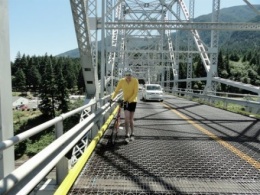 NBA legend Bill Walton
walking over the Bridge of the Gods
this past summer.
(Photo: Jeff Bernards)

The Bridge of the Gods is a key connection for bicycling and hiking over the Columbia River between Oregon and Washington. But the span, which is about 40 miles east of downtown Portland, has one big problem — it has no dedicated space for anything other than cars and trucks.

Fortunately, the Port of Cascade Locks and the State of Washington are working to improve access to the bridge. In August, Washington won a $20,000 grant from the Federal Highway Administration’s National Scenic Byways Grant Program to conduct a “feasibility study” to find out if adding a bicycling and walking path to the Bridge of the Gods is possible. (The grant is part of a $504,000 award that will also build a new multi-use trail connecting the bridge to Stevenson, Washington.)

The project would be a welcomed improvement. I’ve never attempted it myself, but I recall that when Portland Trail Blazer legend Bill Walton and my friend Jeff Bernards rode out there back in July, they actually walked over the bridge.

Not only would safer passage by bicycle on this bridge make it more enjoyable to ride in the gorge, but the bridge is also a key link in the Pacific Crest Trail, a popular hiking route.

Back in May, the Mayor of the City of Cascade Locks, George Fischer wrote a letter to the FHWA urging them to fund the project. He wrote that the bridge is, “One of the most important and historical transportation links in the Pacific Northwest,” and that it is, “very unsuitable for safe pedestrian and bicycle traffic.” Once the Stevenson trail is complete and people can safely cross the bridge without a car, Mayor Fischer wrote that it will, “provide a strong economic stimulus to the community of Cascade Locks.”

According to an email sent to members of the Pacific Crest Trail Association, the Port of Cascade Locks wants to leverage this planning grant into state money for engineering work to see if the bridge can handle the weight of a new pathway. This project is likely years away, so we’ll keep you posted on any developments.

If only WA-14 was not so sketchy between the Bridge of the Gods and Vancouver. Little to no shoulder and lots of semis. However, one of my favorite rides ever due to the scenery:

Do it, if only to ride over the bridge, but mostly for the beer at Walking Man (it’s damn fine).

Although the bridge is narrow the speed limit is only 15 mph. It still isn’t ideal for ped/bike traffic, but it is not as dangerous as some bridges, like the Longview Bridge for example.

Great news, the view from the bridge is fabulous, and it’s an important component of the PCT and lots of other recreational routes.

That said, don’t wait for a path to use the bridge. I’ve driven it, walked it and biked it and have always felt safe and comfy. As I recall the speed limit is 10 mph. Cars have never been in a hurry when I’ve been on the bridge. Though the steel grate deck takes careful riding on a road bike.

Just biked across it this summer on Gorge tour. 700×23 tires with loaded panniers. No problems.

And just across the bridge on the washington side is Walking Man Brewery. Totally worth the trip!

I’ve ridden across the bridge many times, in very weather condition except ice/snow. Took until my 3rd trip to look down… that is SO COOL! (not recommended if you have “height issues”). Next step – get a picture looking down 🙂

For those too frightened to look down themselves, I managed to take a photo last time I cycled out that way.

Nothing like looking down to the Columbia 135 feet below.

If they built a path, I would personally miss cycling over the metal grating. I’ve never had an issue cycling over the bridge, but I could see why others might find it intimidating. This bridge is already open to bikes and peds, however. Why not spend this money opening up the Hood River bridge to bike traffic? I think that could do a lot more good.

adding a path and a way to cross the bridge would be fantastic. it’s such a beautiful area and i don’t get there nearly enough because i don’t feel safe biking there, so all i can do is drive. thank you, George Fischer!

I didn’t see this in the article, but the bridge is currently closed to pedestrians. Unless they’re walking the Pacific Crest Trail (Mexico – Canada).

I had a friend visit me a couple years ago while she was walking the PCT. Myself and some friends gave them a ride back to Cascade Locks, and hiked the first couple hours up the trail in Washington with them. It was a spectacular walk across the bridge, and the bridge toll takers didn’t question the legitimacy of those of us with small backpacks.

& when we non PCTers came back a couple hours later unescorted by legit walkers, nobody complained.

So though its technically closed to pedestrians, you can try walking it, you can certainly do it north to south…

And traffic is light and slow enough that the bridge could probably be permanently opened to all pedestrian traffic with few consequences or conflicts. FWIW.

To me a priority is getting across at Hood River. You can’t walk or bike on that Columbia River crossing.

Ted Buehler
Reply to  ME Fitz

Fitz —
Plans are in the works to Build a new bridge at Hood River.

I’ve ridden over this bridge numerous times. I find it exhilarating. Looking down and being able to see through is rather cool. Windy days feel a bit sketchy but I’ve never had issues. That said, it would be a nice feature to add bike/walking lanes.

I wouldn’t complain if this project gets done, but I’d certainly rather ride Bridge of the Gods as-is than the Biggs Bridge, east of the Dalles. Or the Astoria Bridge. Or the Hood River Bridge (not legal, of course) — which should be our highest priority.

Haven’t ridden the Longview bridge, but is it that bad? I almost ended up doing a trip over it last month, and at least the sidewalk looks no worse than the Ross Island. Am I wrong?

This picture is of my friend Mark on my Bike last year. He was visiting from MA and this was his first ride on my bike (we biked from the house to Skamania) . At the time he did not own a road bike and he did fine.

It’s not all about just making it from Point A to Point B alive. The line in the middle counts for a lot.

While traffic is slow and probably won’t mow you down, people deserve a place to stop, rest, breathe, and gaze out at the geologic glory without feeling rushed. A side path would be nice.

@ Rebecca.. Good point. It would be fun to stop there once every so often. Great view!

If a walk/bikeway is built, I predict it will be a popular view spot for travelers and tourists to stop. I hope a viewing platform off the path is included!

I know I would stop and enjoy the view and the exhilaration of being way up above the river. I’ve always had traffic behind me and no time to enjoy the scenery.

I’ll ditto what Pat said- I’ve ridden it every year for the last decade and I’d like a place to stop in the middle.
FWIW: here’s the page that links to a couple maps and cue sheets: http://www.ohpv.org/events/bog/BoG.htm

This bridge needs absolutely no improvement. I have ridden across it many times. The traffic is always very respectful. What I love about it is that it feels very European in the way in which all types of users use the bridge with respect for the other types. Walkers are as welcome as cars. Any change would actually just ruin this and put us back in the us vs. them mode of the rest of our roads and bridges.

I LOVE this bridge. Please don’t change it!

If they would remove the pedestrian and cyclist prohibited signs I would agree.