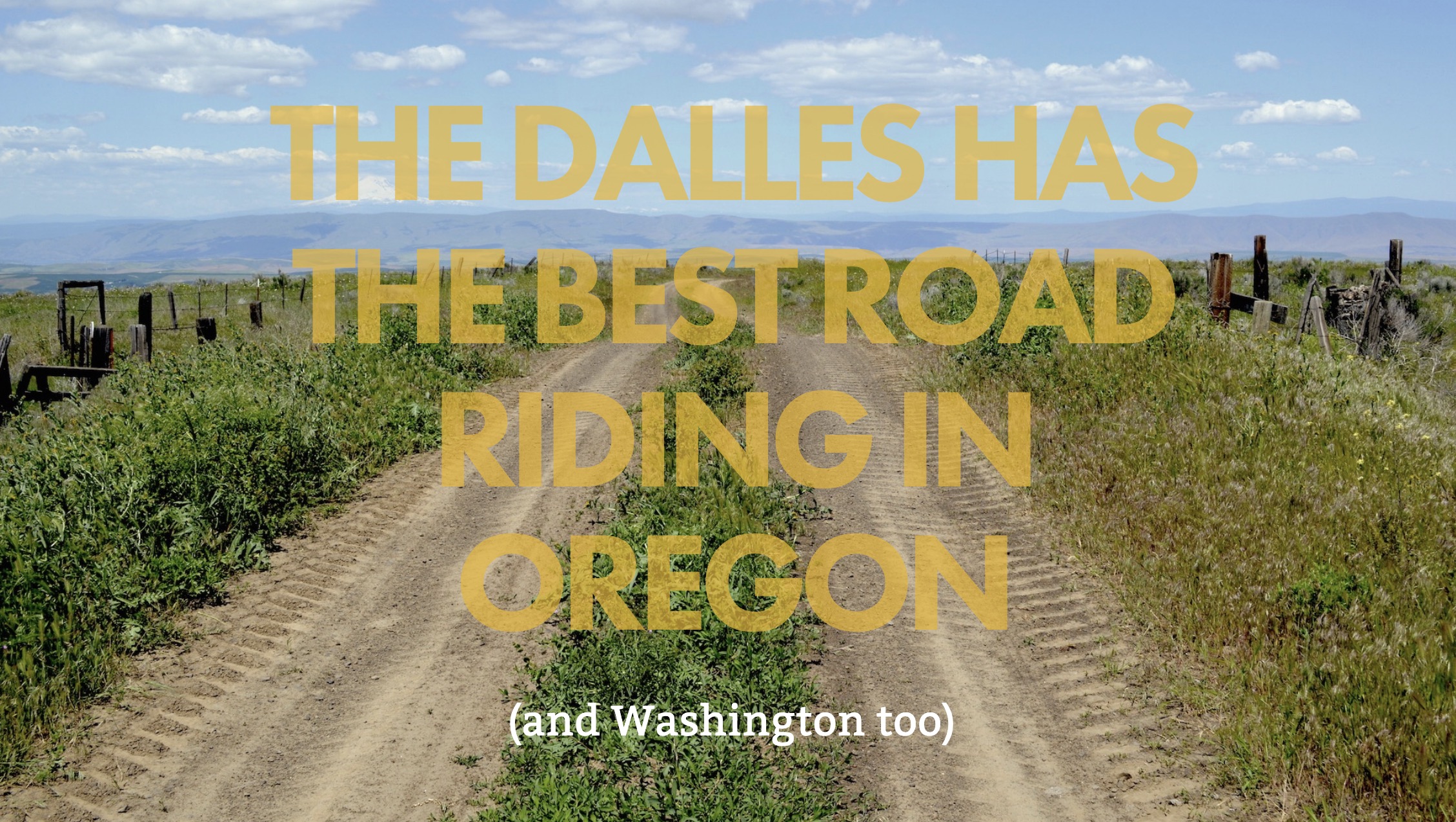 Ever loved riding in an area so much you became obsessed with it? So much so you found yourself poring over lines on maps, dreaming and scheming on how to ride them all? 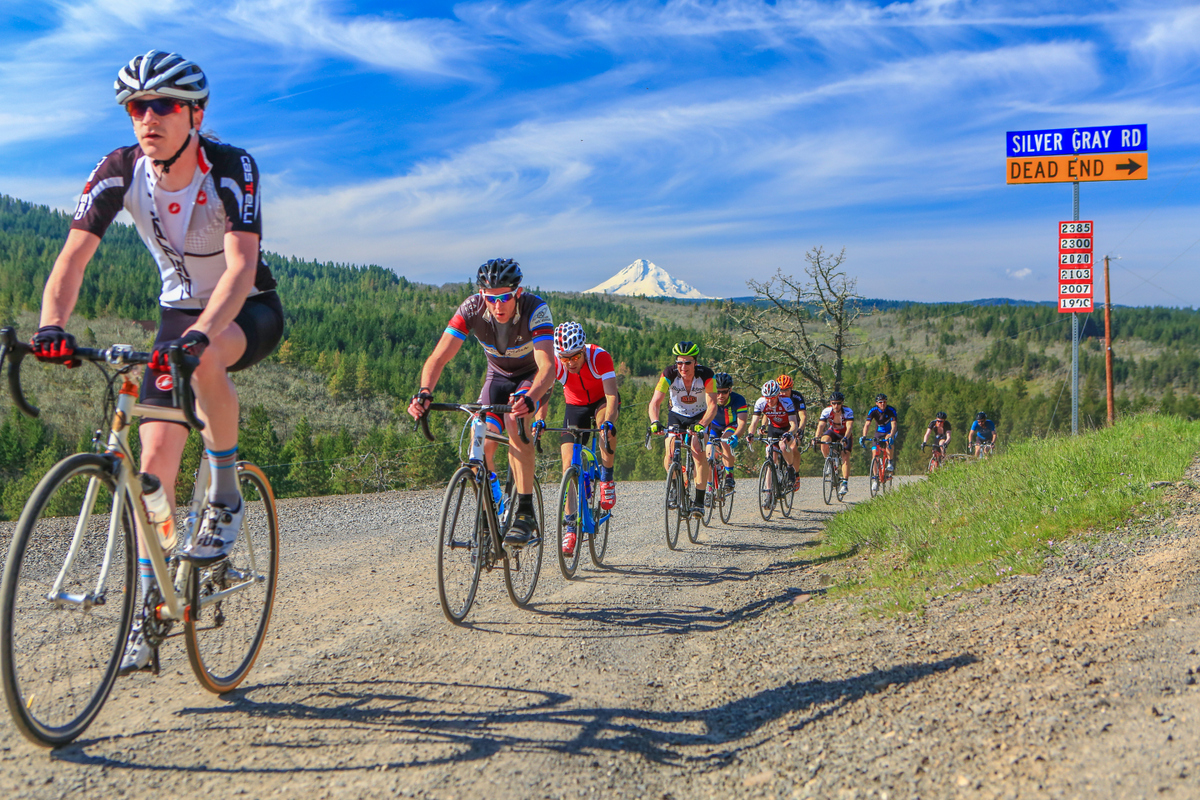 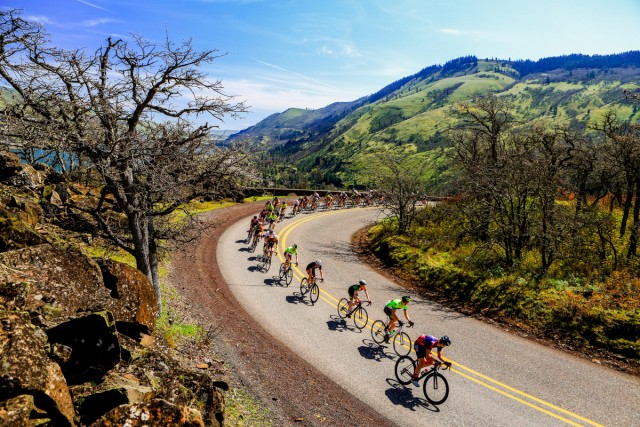 Racers string out as they make their way up the famous Rowena Loops en route to Mosier during Day 1 of the Gorge Roubaix.
(Photos: Leonard Johnson/Hot Foot Photo)

The Oregon Bicycle Racing Association calendar took racers to The Dalles this past weekend for the Gorge Roubaix. Event promoters offered two days of racing (and one non-competitive “gravel grinder” ride) along some of the most beautiful roads in the state. 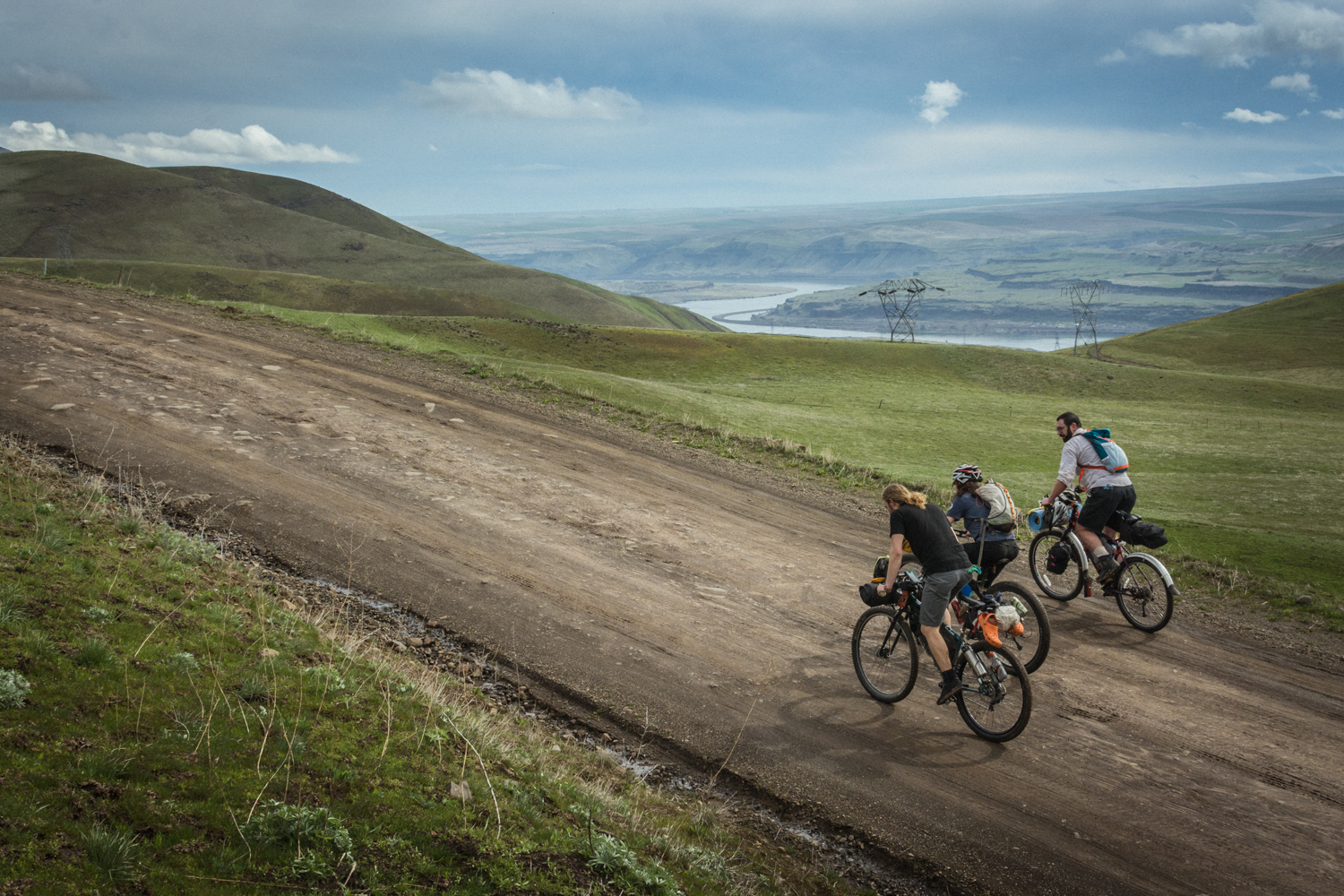 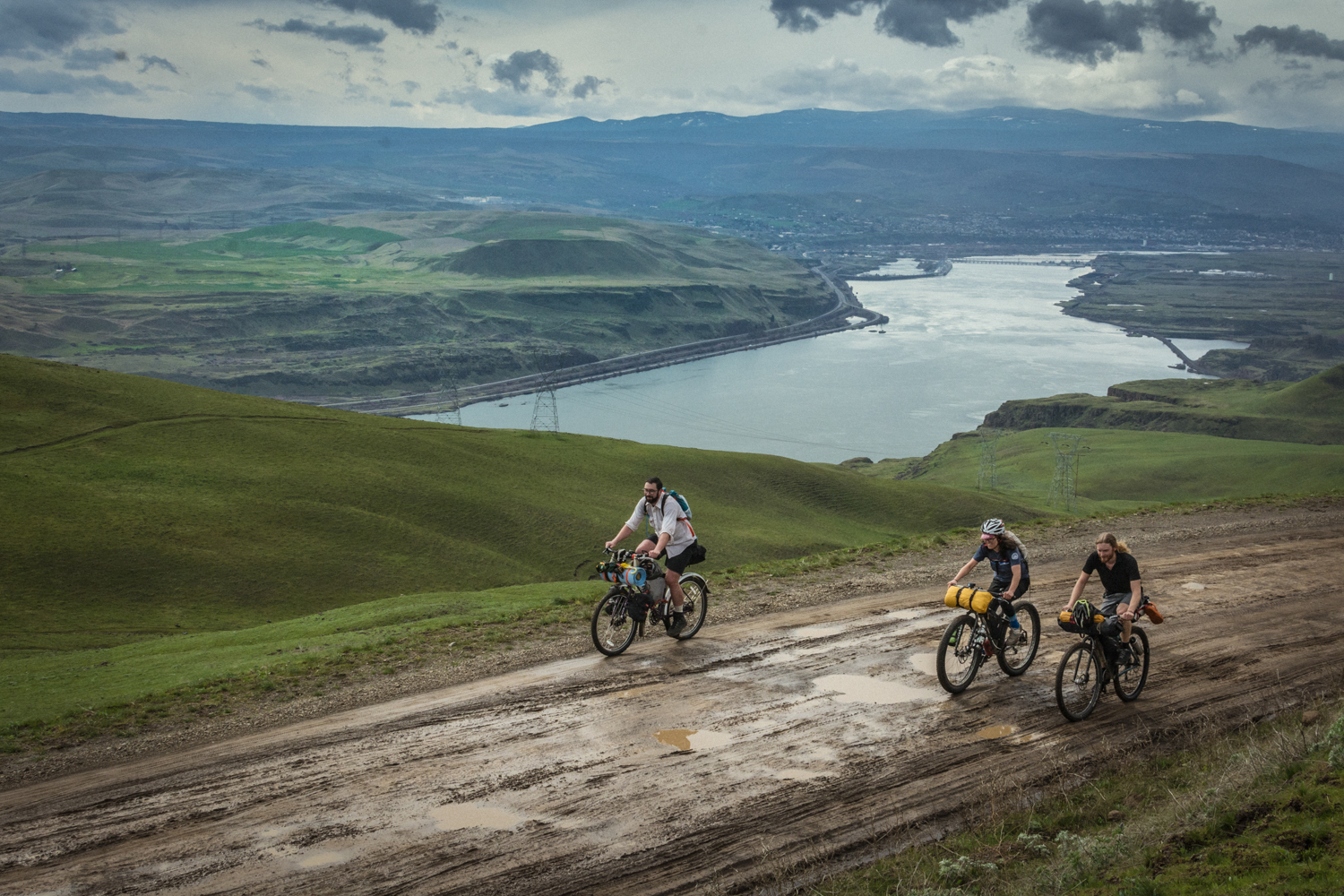 Looking back towards The Dalles where we started.
(Photos and words by Gabriel Tiller/Limberlost)

Welcome to The Ride, our ongoing series of inspirational adventure stories sponsored by 21st Avenue Bicycles. See more from this series here.

It’s becoming that time of year again when cyclists start coming out of hibernation and you can usually count on it being sunny (or at least not snowy) in the rolling grass hills of the eastern Columbia River Gorge. One of VeloDirt’s longest running rides — the Dalles Mountain 60 — took place last weekend starting anarchically from the unassuming parking lot of Holsteins Coffee in The Dalles. For a non-event, just a murmur between friends on Instagram or the simple expectation of tradition every second Saturday of March, it’s a rather popular ride. 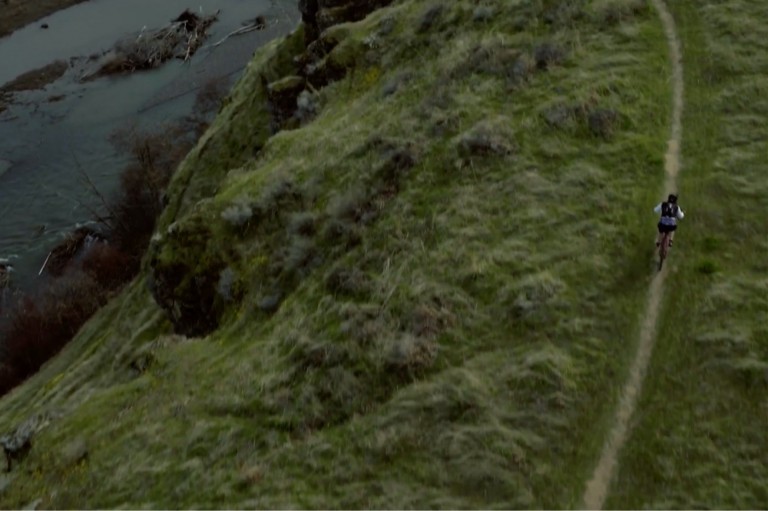 Most regular readers of this site know that I have a major crush on eastern Oregon. If you love to ride bicycles, it’s sort of a paradise. It has wide open roads, big skies, forests, lakes, rivers, and wonderful rural towns full of nice people. 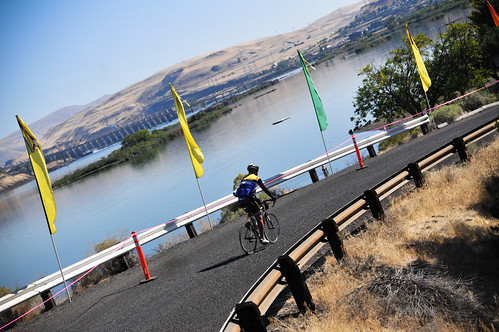 The final descent into Riverfront Park in The Dalles.
(Photo by J. Maus/BikePortland)

After seven days, 489 miles, and 35,000 feet of climbing, my Cycle Oregon 2014 experience concluded in The Dalles on Saturday. 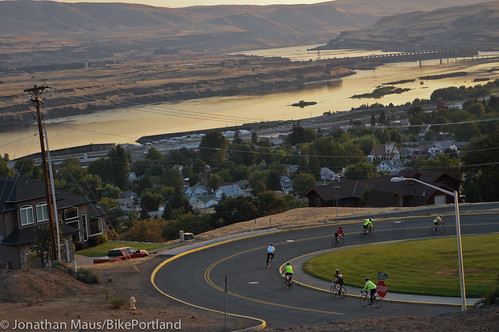 Leaving The Dalles at sunrise.
(Photos by J. Maus/BikePortland) 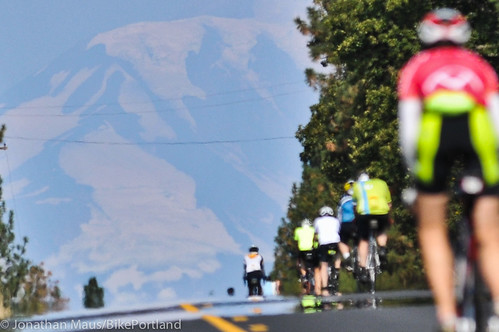 Mt. Adams was never too far from view today 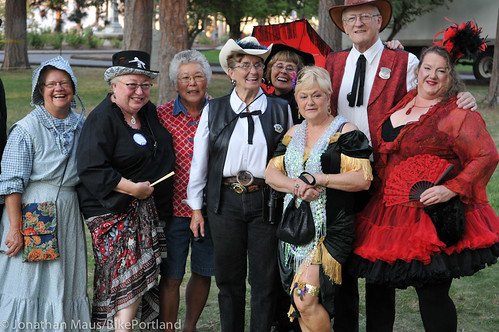 “The Floozies” — The Dalles official greeters.
(Photos by J. Maus/BikePortland) 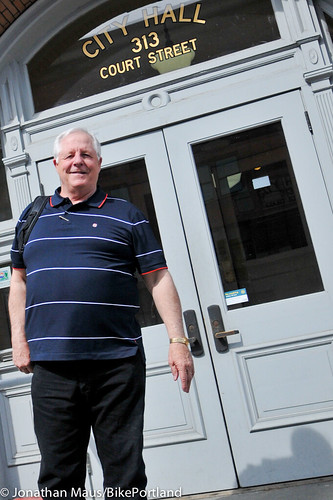 Mayor of The Dalles, Stephen Lawrence.
(Photos by J. Maus/BikePorltand)

The Dalles’ Mayor Stephen Lawrence described himself as a “Blumenauer bike freak” when I met him in City Hall on Monday. I’m used to elected officials boosting their cycling credentials when they talk with me; but in Mayor Lawrence’s case, so far he’s actually backing it up. 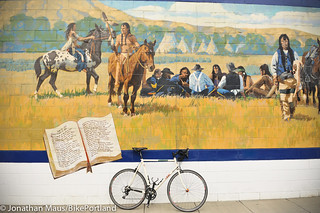 While most of the attention for cycling in The Dalles is focused on the stellar roads outside the city, you’ll be missing a lot if you don’t explore the town itself. Put another way; you don’t have to wear spandex or be ultra-fit to explore the cool things this town has to offer. From history, to local watering holes, to big views of the Gorge, a bike is all you need to take it all in.

After being here a few days, I heard about several “must-see” destinations over and over again. So today, I headed out and connected a bunch of them up into a tour. I had a great time doing it myself, so I figured it’d be worth sharing. 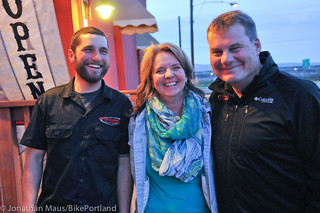 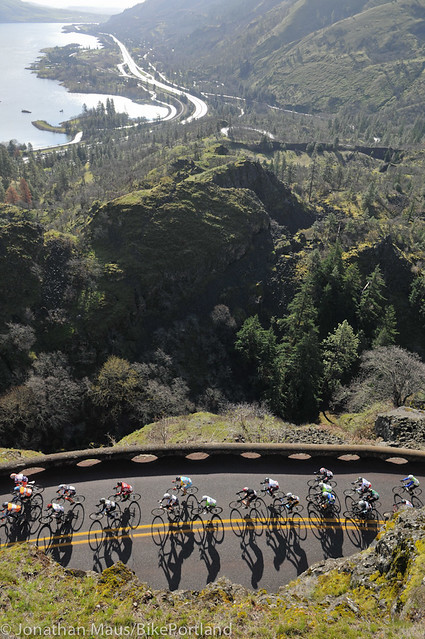 Racers ascend the Rowena Loops with I-84 and The Dalles in the background.
(Photos by J. Maus/BikePortland) 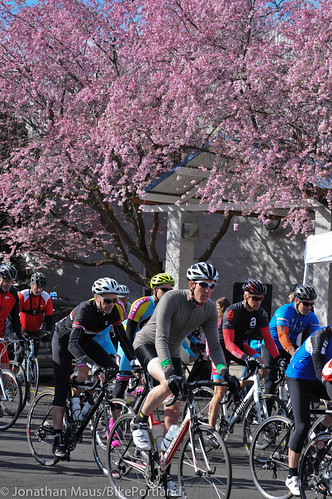 The first day of the Gorge Roubaix is in the books. It was a fantastic day of racing, with dry and party cloudy skies most of the day. There was some rain for the later races. And the wind was howling; but that’s to be expected out here in the Gorge.

Personally, I’d rather forget what happened. Long story short: I got dropped early by the Cat 3 field and never caught back on. Oh, and the only guys I passed all day had gotten flats. It was my first road race since 1998, so I didn’t expect much. But still, being last and riding slow and alone for three hours in a “race” is never awesome.

But enough about me, let’s take a look at some photos from the day.

I got an unexpected treat this morning and was able to hop in an official media car to do some photos of the early races. It was beautiful out there. Before we headed out on the course, I got a few shots in the parking lot and registration area. Have a look…