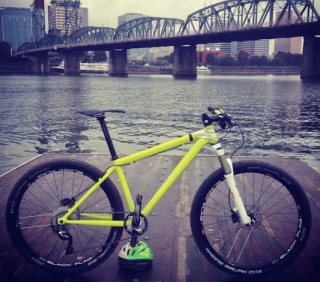 One day, while walking by my office to borrow this or that from the boys at Ruckus, Oscar Camarena from Simple Bicycle Company approached me about building a light, stiff, ultra-modern, aluminum hardtail in the new 27.5” wheel size for me to race XC mountain bike in 2014. I had been dreaming of a 27.5 bike for years – wanting the benefits of larger wheels without the weird geometry of a 29er designed for my short 5’ 7½” stature. This dream was validated two years ago when World Champion Nino Schurter switched to 27.5 – his team saying it was a perfect size for his height (5’ 8”). The proportions of Schurter’s bike looked so right, I thought – reminiscent of the long-and-low 26” hardtails of my childhood, but with wheels that filled out a frame a bit better in our modern, big-wheeled context.

27.5 was going to take over, and Camarena needed to build one ASAP. I needed a new race bike. Perfect!

And since the owners of Ruckus and L’Ecu were next door (not to mention the fact that that they’re my roommates), it made sense to get the frame heat-treated, painted, and assembled in the building.

Before getting into the build process, here’s a little about each company that was involved: 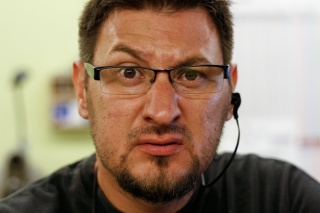 Camarena has only been here 15 months, but he’s already built frames for many of Portland’s most prestigious brands, and he guest instructs at United Bike Institute.

Camarena cut his teeth under the tutelage of Jay and Jeremy Sycip in the Bay Area before moving to Yakima, WA in 2001. His family bought a tortilla factory in Yakima that came with an unused 1000 sq ft building in the back that they offered him. He started the Simple brand there in 2003, then bought Arctos Jigs in 2006, running both there until he moved his entire operation to Portland in 2012.

The Simple brand has been forced into the back seat to a certain extent, as Oscar is deluged by requests from other frame builders to build their frames under contract or to construct Arctos Jigs for them.

But there’s nothing Camarena loves more than building someone a custom Simple Bicycle Company bike.

Devin Zoller makes custom carbon fiber road, cyclocross and time trial dream bikes built to order and spec’d according to his customers’ wildest dreams. Carbon frame manufacturing is typically outsourced overseas to massive companies that mold out cookie-cutter frames for just about every major brand in existence. But Zoller does it the old fashioned way: with a lot of work.

Zoller selects the layup, outer diameter and inner diameter of the tubes for a specific frame and has them manufactured specifically for him. The next step is to put the frames in his Arctos Jig according to the desired measurements and geometry, tack them together with epoxy, wrap the joints with pre-impregnated carbon fiber sheets in various orientations depending on what sort of road feel he’s going for, then vacuum bag the entire frame and put it in the oven for a computer-controlled cure cycle. Still with me?

It’s actually more complicated than that, but the next part is simple: Zoller sands the frame, finishes it however the customer desires, bolts on the customer’s dream parts, then hands it over.

Shawn Small has been messing with composites since 2002 when he was working on his Engineering degree. He moved to Portland from Milwaukee, Wisconsin and started Ruckus Components in 2008 with the intention of fabricating custom bike parts; but the demand for carbon repair services ended up taking over most of his business. Becoming too busy to go it alone, Small hired on his college roommate Graham Adams for his good looks and his people skills. Adams eventually took over the “artwork restoration” side of the business so Small could focus on the repairs.

The company eventually changed its name to Ruckus Composites to reflect its new identity and today, Ruckus is one of the most successful carbon fiber bicycle repair companies in the world. They’ve even broken out of the bike world with their new Carbon.Access.Tool. key holder.

Contact them if you need a frame repaired, an imaginary carbon part manufactured, or a hot dog launched into space.

The Process: How the bike was done

I waited a while for Camarena to get through some “real” customers’ bikes, but eventually an Instagram photo showed up with my name tagged in it. It was my dropouts!

The aluminum, hand-fabricated, through-axle dropouts were the most difficult part of Camarena’s process. They were designed to easily switch between standard hanger, direct-mount hanger, or no hanger for single-speed mode. In raw aluminum, they looked like a component from the space shuttle. 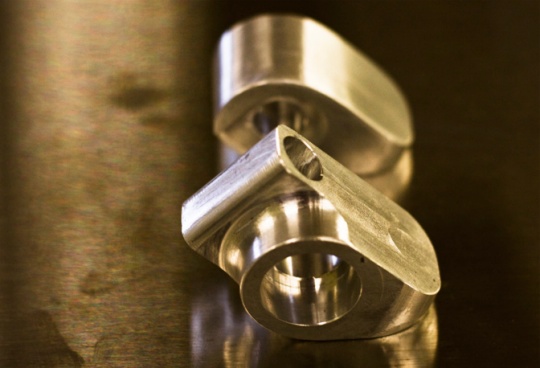 Everything else was old hat – apart from the new wheel size – and Camarena welded it together over a couple of days, letting me come upstairs and observe much of the process. 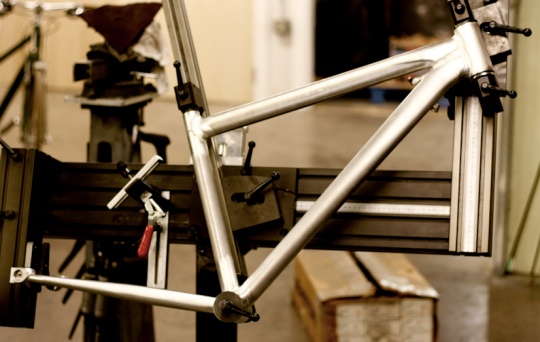 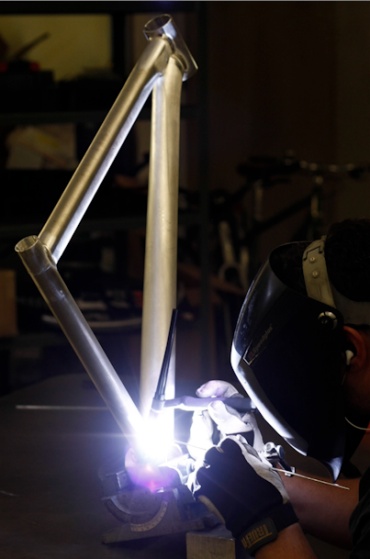 Once completed, the frame made the trip downstairs to L’Ecu’s industrial batch oven. Zoller was able to bake my frame at a day’s notice, according to Easton’s recipe. All it was missing was about a gallon of neon yellow paint, and for that the frame went back upstairs with Adams to the Ruckus Composites paint studio. 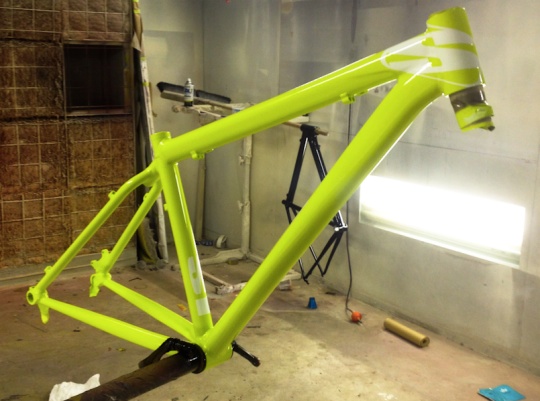 Adams gave it a neon yellow paint job with a matching handlebar, adding a very complicated white Simple logo at the head tube junction that he outlined in a sparkly navy blue decal and clear coated over to reveal: 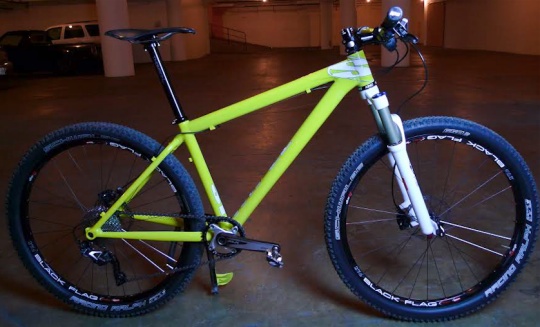 And it was all mine!

I’d never had a custom bike made for me before. What if it doesn’t fit? I fretted.

But the thing I feel most on this bike is that it just feels right underneath me. I can move it exactly where I want it. It inspires serious confidence at high speeds, yet still corners quickly. It bunny hops and wheelies with ease, yet the front wheel stays planted on the steepest climbs.
This bike is about balance – the balance between the old 26″ wheels and the newer 29er “wagon wheels.” Balance between downhill rip and cross country grip.

Perhaps any lightweight 27.5″ hard tail could have fit this particular bill, but I doubt that it would fit so perfectly and perform exactly the way I want it to. And what other mountain bike could I claim to have witnessed being welded, heat-treated, painted, and assembled – all under one roof?

*Ruckus has moved since this story was written. They are now located a few buildings away at 87 SE Stark.

I wonder how much that would cost the general public…

“27.5”? This is the same as 650B, right? Are American’s so stupid that we have to keep re-branding tire & wheel sizes? (Sorry, that’s an industry thing and doesn’t reflect on these local businesses. I think I’m becoming a retro-grouch.)

Good story. It’s great to see the creativity bubbling away!

27.5 is the same as 650B, yes. To answer your second question: sort of yes, sort of no. I think everyone is comfortable with “29er” wheels and tires at this point, so what’s different about “27.5?” Yes, these are arbitrary sizes, dreamed up by the mountain bike industry (29er comes from the original 700c “28er”), but there’s a consistency in naming all MTB wheel sizes in inches after the 26″ wheel. Also, it helps to differentiate between rando tires and MTB tires the same way calling “29er” differentiates between “700c” road tires. And finally, it’s 27.5 now either way, so we’ve all gotta get used to it (until something new comes along).

I don’t think ti’s so much of a re-branding, as it is simply a designation of intended use.

I was daydreaming on Tout-Terrain’s website the other day and they kept mentioning 28″ inch wheels, so it’s not just an American thing.

Great post! I love hearing people be passionate about their work! Doubly so when it’s about bikes. More articles like this please.