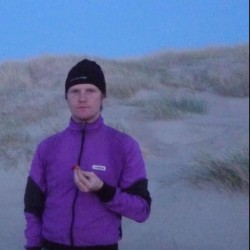 There are four bike companies in my building at the corner of Madison and 3rd Ave: Simple Bicycle Company/Arctos Jigs, Ruckus Composites*, and L’Ecu Bicycles.
END_OF_DOCUMENT_TOKEN_TO_BE_REPLACED One of a series of “Bike Boys of Portland” postcards being used to raise money for a local cause. A calendar is in the works too.

END_OF_DOCUMENT_TOKEN_TO_BE_REPLACED The Italians know how to do bike racing.
(Photo: Gazzetta.it)

Being such a bike-race-crazy town, local cafes and pubs are showing the race on the big screen. With the race starting to heat up, it’s definitely worth grabbing a drink and tuning in.
END_OF_DOCUMENT_TOKEN_TO_BE_REPLACED The announcement comes after a week and a half of weeding, scraping, patching, sanding, and sweeping Portland’s beloved concrete bowl to perfection (or close enough, anyway). The track cleanup effort was a labor of love by a crack team of volunteers. END_OF_DOCUMENT_TOKEN_TO_BE_REPLACED