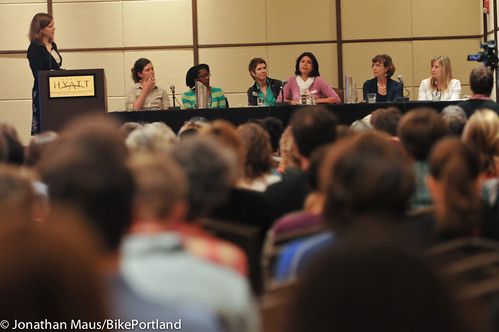 In Sonoma County California, only 20% of all bike trips are made by women. That’s lower than the national average (24%) and it’s low enough that Sonoma County Board of Supervisors Chairwoman Shirlee Zane wanted to do something about it. A rider herself, Zane called up the Sonoma County Bicycle Coalition (SCBC) and together, they started up a new riding group called, “Biker Chicks.”

At the first-ever National Women Cycling Forum held on opening day of the National Bike Summit in Washington D.C. today, SCBC’s outreach director Sandra Lupien was seated right up front. She explained to me that Biker Chicks rides are at an inclusive pace, the attire is “come as you are” and at their first ride in April, they’ll ride entirely on a multi-use path. 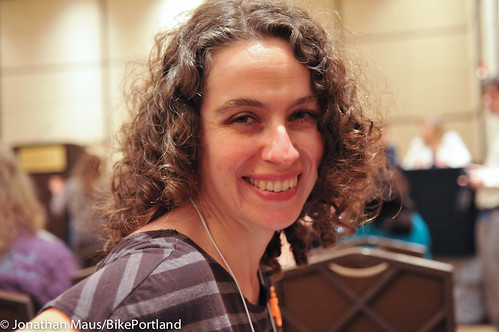 Turns out Sandra’s experiences in Sonoma County are similar to many other cities around the country. The concern about America’s low numbers of women bicycling has led to an outpouring of advocacy and today’s Women Cycling Forum was proof that the issue is front and center on the national stage.

For award-winning author Sue Macy, who wrote Wheels of Change: How Women Rode the Bicycle To Freedom (National Geographic, 2011) and was the keynote speaker at today’s event, the topic deserved a closer look. The way Macy sees it, bicycles were far from just a pastime for women in the late 1890s, they were nothing short of revolutionary. 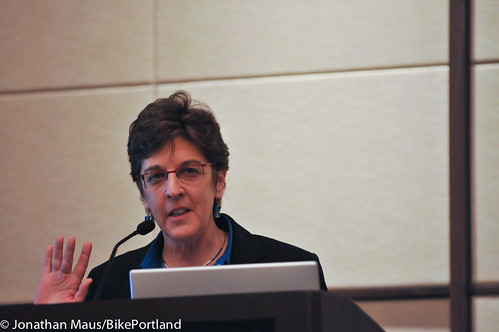 “The bicycle revolution changed the way women related to their bodies, to men, and to the world at large,” she told a packed room (of about 85 percent women) at the Summit today. Macy shared quotes, photos and anecdotes of the era when bicycles helped women push the boundaries of societal expectations. 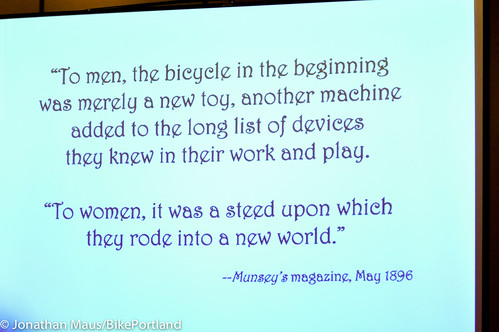 As more women took to bicycling, there was a movement toward “dress reform.” Biking, when coupled with a reform of the dress-centric fashion of the day, led to nothing short of cultural upheaval. “Some people were very worried,” said Macy, “about women starting to wear ‘bifurcated garments’ (a.k.a. pants).” 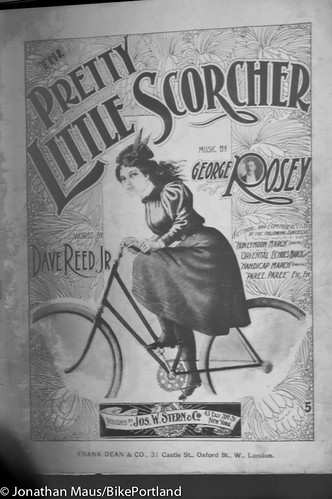 Freedom of movement for women came in more ways than just fashion. Macy said the bicycle gave young women the ability to “entertain their gentleman callers” outside the home — and away from parents’ prying eyes — for the first time ever. “Once they started riding bicycles, women could go off on their own, and spend time with anyone they met on the road.” Macy said this was “scandalous” and led to, “many romantic encounters, friendships, and romances.”

It also led to moral police who spoke out against bicycling as the “devil’s advance agent.” Doctors of the day even worried that some women only liked to ride bikes because the seats were “a means of gratifying unholy and bestial desires” (a.k.a. orgasm). This led to special seats tilted backward to promote “a graceful attitude.” 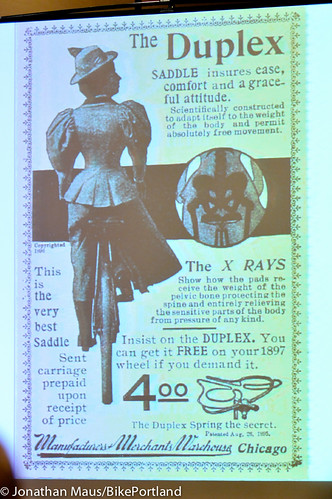 Given this storied history of women on bikes, it’s a shame that less than one-quarter of American women do it regularly. After Macy’s presentation, a panel of women shared insights on the modern state of women’s cycling and gave us some clues about why more women don’t bike. 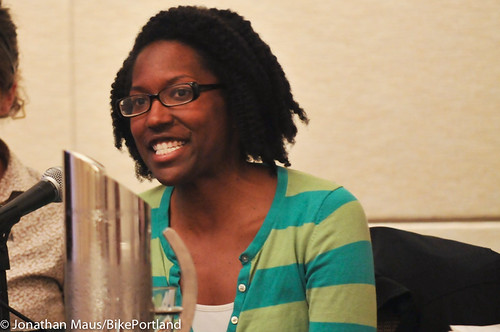 Better, safer infrastructure would get more women biking, several of the panelists said. Elysa Walk of Giant Bicycles said that many women are “scared and intimidated” by biking and that we’ll never get more women on bikes until we have “truly separated” bikeways. Nelle Pierson said that fear of unsafe streets isn’t entirely gender-specific. “We need to focus more,” she said, “on normalizing biking and in the way that it’s presently marketed, it’s tough. When you look through a magazine, you see MAMILs – middle-aged men in lycra. We need to work on marketing and make sure we’re bringing in women of all shapes, sizes and ages.” 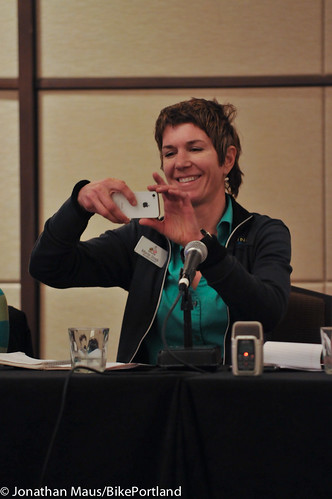 Former pro racer Marla Streb was so inspired by the large crowd, she wanted a photo to remember it.

Another barrier discussed by the panel was bike shops (something we’ve touched on in the past as well). “I’ve had some terrible experiences at bike shops…I think it’s a critical piece. It’s where you can get turned off to biking.” said Pierson. “They need to clean their bathrooms,” added Streb, which was followed by laughter and applause.

“If a bike shop can look like Lululemon [an activewear retailer], women are going to come in and feel welcome,” said Streb.

Having the right products available is also key in getting women excited to ride. Elysa Walk said she was only able to get her own mom on a bike after she got her “a really cute bike that she could really love.” Moderator Elizabeth Kiker added, “I love the way my pink bike looks because I feel cuter with it.”

Deeply embedded socialization also makes it less likely that women will be comfortable working on their own bikes. “I think bike maintenance can be intimidating to a lot of women,” said Pierson, “My dad never put a tool in my hand, he handed me an Aladdin movie and I was told to worship princesses. We should be encouraging women to work on bikes.”

At this stage of the game, just spreading the word and creating more support and groups for women interested in cycling is important. Veronica Davis said her group, Black Women Bike DC, started on Twitter with just three members. Less than one year later she counts 450 women as members. “What everyone said who joined is, ‘I thought I was the only one!'”

I’m ALL for more women on bikes — not trying to be some “lowlife GUY”, but the independence of women who aren’t afraid to ride is exciting! My 14-y-o daughter is a FIERCE rider, still not even interested in a driver’s license — she’ll get a $1200 MTB for her sweet sixteen if she keeps going like that! (Now, if I could just GET her to want to even LEARN about the maintenance…guess that’s a ‘downside’ of being a bike mechanic….)

As someone who was forced to work as a janitor during junior high and high school, I will tell you first hand that women’s bathrooms being cleaner than men’s bathrooms is a myth. Women’s bathrooms are often larger and laid out better, but from a cleanliness standpoint they are right down the middle. Each having things that are uniquely dirty characteristics related to males and females, but neither being a disgusting wasteland or a pristine palace. Day to day use (venue bathrooms are a completely different story), neither stands out in any respect, other than size and layout.

it’s not about men vs women’s bathrooms. it’s about bike shop bathrooms, many of which act more as mechanic storerooms and cleanup areas. i have definitely felt uncomfortable in them.

Finding a gross bathroom is so easy, it is a very weak excuse to use in terms of exclutionary practices.

One could argue that if more women patronized the shop, then they could afford more employees, and the bathrooms would be cleaner.

If it was not clear that my point was a that it is a weak excuse, and for me takes steam from the whole argument, then please accept this as my angle.

As a woman, part of what I feel is a barrier to getting my female friends/family members/coworkers on bikes are the behaviors and actions of people in autos.

Driver education would go a long way towards helping everyone feel more comfortable– and would probably lessen the number of times people have tried to pass me to close, or yelled at me for riding my bike in the road instead of on the sidewalk “where I belong”.

A big part of the problem is the vulnerability we all feel. Another big part of the problem is infrastructure– I know that I feel much less vulnerable riding in a bike lane than I do sharing the road with cars; when Tigard took out the bike lane by Fowler School to put in a parking lane (“because people were parking there anyway”), I felt much less safe riding on the 25mph arterial road that Tiedeman has become.

Driver education is a nice idea, but forced education will only widen the rift between people on bikes and people in cars. The simple fact is that you will still have the “cares” and the “don’t cares”, and for every 200 “cares” that pass you un-noticed you will only notice the “don’t cares”. These are the drivers you will talk about, these are the driver’s you will remember. There is no way to positively reinforce good behavior in a punitive system.

I remember one time in Denver the police tried to pull people over and thank them for good driving they had observed and ended up taking five or six people out of about ten to jail because they were driving with no license. I am not excusing un-licensed driving at all, just making a point about a system has no tools to reward people that do it right.

There is no reward in a punitive system.

Staggering: Sonoma County California, only 20% of all bike trips are made by women.

I am a woman/cyclist/biking columnist just a few hours south in Central California in Santa Cruz County, I hope we are at least 50 percent women riding but I don’t know.

Thanks SO MUCH for your coverage of the first-ever National Women Cycling Forum held on opening day of the National Bike Summit in Washington D.C.

Really appreciate your reporting on it!

….it is true that cycling and the zipper were proclaimed “devil’s advance agent.” in the 19th century… so than color me Satanic!

I really like the posters representing women on bikes.