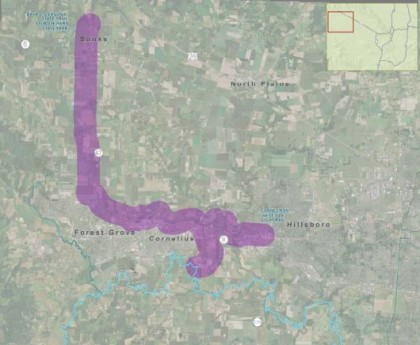 As the metro area’s rugged east side races to build its recreational bike network, the gentler, flatter west side is showing how persistence (and a steady stream of money) can pay off.

The farmland west and north of Hillsboro would get a 15-mile off-road paved path connecting the Hillsboro Central MAX station directly to the Banks-Vernonia Trail, making one of the region’s easiest bike-to-nature trips even easier, under a plan that’s starting to roll forward this month.

“It’s going to be huge,” Robbins said. “Everybody’s going to want to come over to ride their bike.”

Like other regional trails, the path will vary from 12 to 14 feet wide and will be great for walking, running and skating too. In addition to Banks-Vernonia, it’ll link users to the Crown-Zellerbach Trail that connects the Vernonia area to the Scappoose area, and maybe one day to the proposed Salmonberry Corridor to the Oregon coast.

Here’s a general description of the route from a relevant planning document, which would also be likely to connect with Cornelius and Forest Grove, creating an excellent east-west bike commuting route through Washington County.

The corridor lies astride a single major east/west road, Highway 8, which runs from Beaverton, through Hillsboro, and Cornelius to terminate in Forest Grove. Highway 8 is basically a 4 lane facility with sections of dual, 2 lane couplets in the cities. Level of service on Highway 8 remains acceptable, except during peak hours, but continued growth will eventually lead to congestion. Expansion options are limited, as there are no other continuous east/west streets in the corridor. Highway 47 runs north/south through Forest Grove and into Banks, and could potentially cross the corridor.

The corridor is also near two railroads. The railroad line north of Highway 8, which has the closest tie to this corridor, is the former Oregon Electric Forest Grove Branch, which runs from Hillsboro to Forest Grove and the ROW is owned by ODOT. Only minimal local freight is currently operating. The Forest Grove Light Rail extension is currently being planned in this ROW.

The planning so far is being paid for by federal flexible transportation funds. There’s no funding source associated with the construction itself yet, a $104 million endeavor that Robbins expects will happen in phases.

“There’s lots of opportunities and lots of options,” Robbins said.

I hope they can get the ROW option for the rail line, even if it
starts North of the trestle on NW Leisy Rd as SR 47 has more commerical
traffic.

I thoought that, too – but this rail line doesn’t seem to be in the Council Creek tral corridor, at least judging from the map. Is it considered a possibility, as it misses the population centers of Cornelius/Forest Grove?

I think you mean the trestle is along Hornecker, not Leisy. That’s not the route the trail would take. That would be a nearly diagonal line between Hillsboro and Banks, rather than the dogleg turn the map shows. Also it would serve no needs other than recreation, whereas the proposed alignment makes bike commuting to and from Max and also within the Highway 8 communities (such as to Pacific University) much easier. Also, rather than the expense of a rail conversion the direct route could probably be made just as bike-friendly given relatively low auto volume by wide shoulder improvements to Glencoe, Wren and Roy roads.

Well your correct in that you could get on the railway at Hornecker at the intersection of NW Cory, but that would before the trestle. Its private
land or at elevation so I was figuring for ease of access, Leisy would be a great place to start.

Oh, man, that would be fantastic. The ride from the MAX station to the trailhead isn’t terrible as it stands, but it’s far from pleasant.

The rail line is the best route, as it travels basically directly from Hillsboro to Banks. Ideally, they could just build adjacent to the line, and keep it open for freight.

Wow, that would be fantastic. I’ve already been hoping to do an S24H overnighter to Stub Stewart, leaving work on a Friday and returning Saturday via the CZT and Hwy 26. I didn’t even know anyone was working on designing such a path, but it would make such a trip even better.

$104 Million..You serious? Love to bike…but someone has to pay the bills.

Have you seen the Federal Highway Trust Fund deficit lately? Apparently in America you don’t have to pay your bills…

Well, compared to the few hundred lane-feet of freeway that $100M will buy ….

I like the suggested routing for two reasons: it gives better direct access to the communities along Highway 8 for recreational and commuter cyclists alike and it leaves the rural nature of the area north of 8 as is. Right now the quieter roads in the Schefflin/Roy/Wilkesboro are nearly car AND bike free and wonderfully peaceful for those who wander out that way. I always assumed a trail connector would follow the rail line that goes out Hornecker Rd. and heads diagonally straight for Banks, but other than the endpoints does not really serve additional needs beyond recreation as there is nothing but a few farms the entire way.

That great “whooshing” sound is Washington County blowing past the rest of the state in the realm of bike tourism. This is going to be BIG someday and – a real international draw. I can foresee peopley flying to PDX, getting on MAX with their bikes and spending days and much money enjoying the forests, wineries, and beaches in the NW part of Oregon.

Remember that this new trail is only about 4 miles from another big Rails-To-Trails project that got Flex-Funds – The Yamhelas Westsider trail from Hagg lake to Carlton (aka. Sonoma Co. North!) yamhelaswestsidertrail.org/

Now, let’s see Hood River County, and the Central and Souther Willamette Valley follow suit with investments in bike-only infrastructure (by which I mean bike only trails, not paint on existing highways) and bring bike tourism to our state in a major way.

Hey, how about taxing studded tires to help pay for it?!?

Thanks for the link Ian. I had no idea a defunct RoW even existed there! I hate riding that narrow section of 47 South of Gaston. Do you know the completion timeline for that trail?