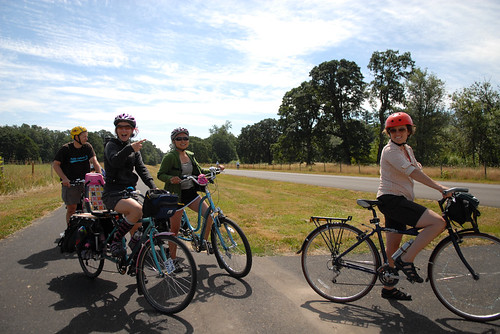 Places like Champoeg State Park (shown above) could become even more welcoming to bike riders if funding comes through.
(Photo by J. Maus/BikePortland)

As we’ve been covering since the legislature passed it back in July, a pot of $42 million in Oregon Lottery-backed funding is now available to bicycling projects for the first time ever through the Oregon Department of Transportation’s Connect Oregon program.

And, not surprisingly, when the application process opened at the end of last year, ODOT was flooded with biking and walking projects from throughout the state. Of the 108 applications sent in, 35 of them were in the “Bicycle/Pedestrian” category (the other categories are aviation, marine, rain and transit) and the dollar amount for those projects totaled more than any other mode.

Now ODOT has released more information about each project, so we decided to take a look.

Of the 108 projects on the list, 11 of them are from Multnomah County. The Portland Bureau of Transportation (PBOT) applied for two projects, Metro applied for just one, and the others were requested by the Portland of Portland and a host of railroad, marine and aviation-minded concerns.

There were no surprises from PBOT. As we reported back in October, they’ve requested a total of $3.6 million spread between a streetcar project and the second phase of their bike share project. Metro’s sole request is $2.94 million to begin construction on a piece of the North Portland Greenway Trail between St. Johns and the Rivergate Industrial District.

Learn more about each of these projects in the descriptions below (provided by ODOT):

Metro – St. Johns Rivergate Access Project (Grant request: $2,294,996, total project cost: $2,868,746)
The project will complete a critical gap in the 40-Mile Loop Trail and the North Portland Willamette Greenway Trail and connect the St. Johns neighborhood and region to the Smith and Bybee Wetlands Natural Area and the Rivergate Industrial District. The project will benefit residents who work in the industrial area, children attending 14 nearby schools and regional trail users.

PBOT – Streetcar Safety and Jobs Access Enhancements (Grant request: $1,600,000, total project cost: $5,020,319)
This grant will close a funding gap for the procurement of one streetcar vehicle, and the installation of automatic train stop (ATS) safety equipment on each vehicle in the City’s streetcar fleet. The installation will begin as soon as funding is available to meet the fall 2015 deadline.

City of Eugene – Eugene Bike Share (Grant request: $909,066, total project cost: $1,136,333)
The City of Eugene proposes development of a public bike share system consisting of approximately 170 bicycles and 24 stations located near residential, shopping, employment, and transit centers in downtown Eugene and nearby areas including the University of Oregon (UO). This bike share system will fully integrate with a 4 station, 40 bike system being implemented on the UO campus in spring 2014.

From here, ODOT will vet these projects internally and then pass them off to regional committees for closer public review before a final decision is made by the Oregon Transportation Commission later this summer. Learn more about this current round of Connect Oregon funding on ODOT’s website.

This doesn’t really define or describe was “Bike Pods” and “Bike Hubs” are.

I agree, want more info! here’s what I found:

A Bike Pod provides needed amenities for the long distance cyclists including water, cell phone charging,
maps and wayfinding information, shelter, bike parking, and seating in the State Park setting associated
with popular hiker biker camps. 7 Bike Pods are to be located along the Oregon Coast Trail on State
Park’s property. One Pod will be constructed in Champeog State Park in the summer of 2014 and will be
funded by OPRD as a portion of the ConnectOregon V match funds. Two Bike Pods will be located along
the Historic Columbia River Highway Bike Route in Ainsworth State Park and Viento State Park. Two
additional Pods are planned to be located along the Old West and Transamerica Trails at Bates State
Park and Clyde Holliday State Park.

Cool! I’ve stayed at the Champoeg hiker-biker camp a couple of times. It’s a nice spot, but the only developed amenities are a couple of picnic tables and an old bike rack. The charging stations would be particularly welcome, since the only other option to keep charged up is to use the outlet in the restrooms. Not really a place you can leave your phone lying around.

At other campgrounds (e.g., Barton) I have camped at a site with full hookups just so I could charge the phone.

I realize that Paul. I’m already in touch with Oregon State Parks employees to get more of the scoop. And thanks to Esther for digging up a few more details from the web!

+1 regarding the City of Garibaldi – Salmonberry Corridor: Garibaldi to Barview proposal! We were at the Salmonberry public meeting last night in Banks, and this specific location was mentioned several times as a real trouble spot. Personal experience matches with that: the hiker-biker camp in Barview Jerry County Park is our favorite one anywhere, but the highway getting to Garibaldi is an immense obstacle to riding into town (not very far away) to get dinner or provisions. It was also awful riding it in the morning fog to continue down the coast.

Another note from the meeting: we were appalled by the lack of attendees supporting the trail for cycling. The meeting was really dominated by local property owners who opposed the trail. They don’t want anything to change there and spoil their solitude. Economic issues were of no apparent concern to that group. Apparently this was a dramatic contrast from the corresponding meeting on the coast, where everyone seems to “get it” about the potential benefits from the trail.

Thanks for putting the word out, bikesalot. I’m disappointed that there were not more people there who share our point of view. This is going to be an amazing corridor and we need as many people as possible to speak out positively for it NOW while it is in the early design stages. Did they provide a way for folks to be notified directly of future meetings? (I could google that question, but figured I’d ask you first.) 🙂

Scott Mizée
Thanks for putting the word out, bikesalot. I’m disappointed that there were not more people there who share our point of view. This is going to be an amazing corridor and we need as many people as possible to speak out positively for it NOW while it is in the early design stages. Did they provide a way for folks to be notified directly of future meetings? (I could google that question, but figured I’d ask you first.) 🙂
Recommended 0

There was a signup sheet at the meeting, but I don’t expect they will get our names added and new messages out for a bit yet. Here is contact information that might be useful for those who have not been to a meeting:

For more information about the meeting or about the Salmonberry Corridor Master Plan, please contact Rocky Houston, State Trails Coordinator, at (503) 986-0750, rocky.houston@state.or.us.

Thanks bikesalot. I subscribed through the link at the website you listed. (http://salmonberrycorridor.wordpress.com/)