Text in bold shows new additions to Senate Bill 260, which passed both chambers of the Oregon Legislature today.

For the first time ever, with the passage a few minutes ago of Senate Bill 260, the Oregon Legislature has agreed to open up the state’s lottery-backed Multimodal Transportation Fund (a.k.a. ConnectOregon) to biking and walking projects. Even though it’s always been referred to as multimodal, the ConnectOregon program has funded only air, marine, rail, and public transit infrastructure improvements — everything but bicycling and walking.

ConnectOregon was created in 2005 as a way to fund “non-roadway” transportation projects that cannot receive funding from the state gas tax or from vehicle registration fees. Much like bike paths and trails cannot use these revenue sources, so too is the case for air, marine and various types of rail projects. In its first three years, the legislature approved $100 million for the ConnectOregon fund, which is doled out every two years. The fund received $40 million in 2011 and this year the legislature has freed up $42 million.

The push to give biking and walking projects a piece of the ConnectOregon pie was a priority this session by both the City of Portland and the Bicycle Transportation Alliance.

BTA Advocacy Director Gerik Kransky said this new eligibility will be crucial to funding some of the top trail project priorities in their recently released Blueprint report. “What we’re seeing is dwindling funds from the feds and from the state. There’s a lack of opportunity to have dedicated funding for bike/ped projects because we’re competing for fewer and fewer dollars.”

As to whether he thinks projects like a new path between Portland and Lake Oswego could compete with traditional ConnectOregon projects, Kransky sounded very confident: “Yes. I think it’s really clear looking at the Travel Oregon study that shows bike tourism is returning an annual revenue of $400 million to the state. We’re confident we’ll be able to win some of this funding. It’s clear there’s an economic benefit.” 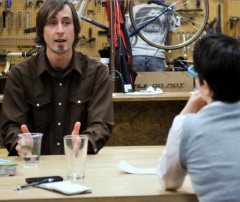 The idea of giving biking and walking projects a crack at ConnectOregon funds was first brought up back in 2009 by grassroots advocates. In 2011, it emerged as a top priority among Governor Kitzhaber’s Non-Roadway Transportation Funding Working Group. Since then, the BTA and other supporters of the idea have been working to build a coalition of support.

Heading into the 2013 session, the BTA was pushing for a bill that would have increased the amount of money that flows to ConnectOregon (with the rationale that it would be an easier debate if biking and walking projects weren’t “taking money” from the other modes), but that bill never gained steam. The BTA continued to fight and push for the eligibility aspect of the concept and today’s victory is the result of that work.

In his floor speech this morning, Sen. Jeff Kruse urged his colleagues to vote against the bill, saying ConnectOregon was “designed and structure for business interests and not for bicycle projects.” “This is taking us in an absolutely bad and wrong direction,” he added, “And there is plenty of other money for bike paths. Let’s keep ConnectOregon in industry where it belongs.”

But no one in the Republican caucus stood up to support Kruse (Democrats have a 16-14 edge in the Oregon Senate). Sen. Alan Bates (D-Medford) spoke up to point out that both the City of Medford and the Medford Chamber of Commerce both feel the addition of biking and walking is “an appropriate potential use” of ConnectOregon funds. Key to Bates’ (and others) support was that the bill doesn’t dedicate any money for biking and walking, it only opens up the possibility of funding by making them eligible for the grants and loans. “It doesn’t grab the money,” is how Sen. Bates put it during his floor speech, “There are lots of things a project must go through to get funded.” Bates said the bill is “a wise thing” and he even made the point that some biking and walking projects could have the business benefit of relieving congestion.

Bates was supported by Sen. Chris Edwards (D-Junction City). Edwards said he was skeptical at first of adding biking and walking eligibility, but he heard “rational explanations” in favor of it during a recent work session on the bill. And besides, Edwards said, “It’s still a competitive grant process, so if that bike or pedestrian project doesn’t rise to the top it doesn’t get funded.”

In a phone conversation earlier today, Kransky said after so many behind-the-scenes emails and conversations with lawmakers, “It’s almost surreal to see people talking about it in public.” “I’m really thrilled.”

The 2013 legislative session is now over. Read more of our coverage here.

I will feel less stupid about buying lottery tickets now!

I don’t play the lottery but you know, just to celebrate I think I’ll buy a ticket today.

Happy sigh. Thanks, Gerik and team.

As if bike infrastructure doesn’t help industry! Whatever.

I’d love to see some grants for more rails-to-trails projects in the Willamette Valley. I dream of interconnected wineries and B&B tours all by separated multi-use paths. Hic!

Well, now I am really conflicted about a voluntary tax, known as the lottery. I am happy that bicycling infrastructure will benefit, but I cannot agree with how the money is acquired. Hmmmmmm… Nope, I am still not going to buy lottery tickets.

Think what taxes would be like if the state budget was not propped up by the lottery.

I think this is awesome news! Another stream to pull in the funds for the projects we want and need!

Sen. Kruse of Roseburg vocally opposed the bill. But Roseburg is a scenically-set small city with a river running through it, not entirely unlike its neighbor up the road, Cottage Grove. I have personally visited Cottage Grove several times, paying for lodging, restaurants, corner markets, etc. I would have spent none of this money were I not visiting to ride the fabulous Row River Trail. I’d say that’s supporting commerce and “business interests”.