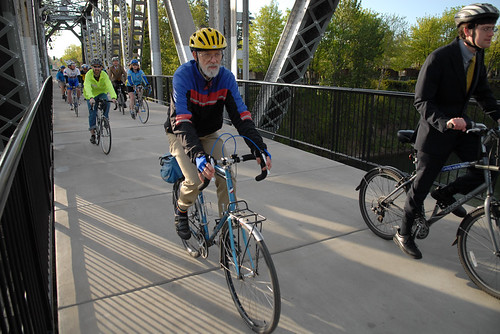 The Union Street Bridge in Salem — open only for walking and biking — is the type of project that is eligible for ConnectOregon funds.
(Photo by J. Maus/BikePortland)

Cities across Oregon are clamoring for more money to build infrastructure that makes it easier for people to walk and bike.

Back in July, thanks to a concerted lobbying effort the Bicycle Transportation Alliance (BTA), the state of Oregon made biking and walking projects eligible for $42 million in funding through the ConnectOregon program for the first time ever.

Sources say this never would have happened without the BTA’s extensive and focused lobbying on the bill and they call it the biggest victory for BTA in Salem in at least 5 years.

ConnectOregon began in 2005 and it relies on lottery-backed bonds to invest in “multimodal transportation projects” around the state. It’s a rare state transportation program that offers dedicated funding for “non-highway” infrastructure. Prior to this year, only air, rail, marine/ports, and transit infrastructure were eligible.

Yesterday, ODOT announced they received 108 applications for this year’s round of ConnectOregon funding. Of the $129.4 million total requested funds, $47.5 million are categorized as “Bicycle/Pedestrian” — more than any of the other four eligible modes and more than the requests for Aviation, Marine, and Transit projects combined.

Here’s the breakdown from ODOT: 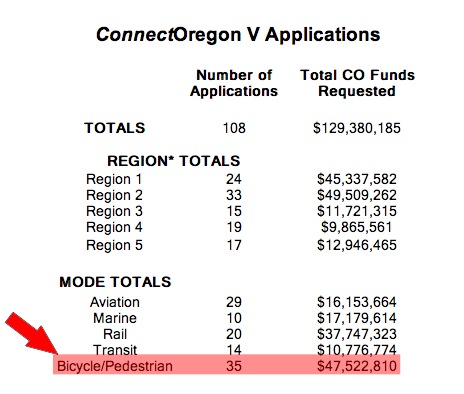 Back in July, the BTA’s Gerik Kransky told us that, “There’s a lack of opportunity to have dedicated funding for bike/ped projects because we’re competing for fewer and fewer dollars.”

Keep in mind, projects funded through ConnectOregon must be “off-highway” by definition. That means the money can’t be used to build protected bikeways or other on-street treatments. The projects will be multi-use paths, bike/walk-only bridges, and so on.

ODOT hasn’t made the project list available yet. They’re currently being reviewed internally prior to being passed off to various review committees and eventually opened to public input. A final decision on which projects will get funded is set for summer 2014.

Learn more about ConnectOregon via our previous coverage or on ODOT’s website.

Could it be used to, say, get the Sullivan’s Gulch Bikeway built sooner rather than later?

The problem right now isn’t money, it’s the railroad’s refusal to give up any of its right-of-way.

That problem is also solvable with large amounts of money. 😉

The more accurate record of the BTA’s campaign leadership team and community engagement is here: http://btaoregon.org/2013/03/community-leaders-call-on-legislature-to-support-biking-walking-and-transit/

It is extremely sad that the bicycling community needs to be funded by lottery playing losers instead of the people chirping on this blogsite. As for needed funds, why not take from the anti-environmentalists?

According to my calculations Region 1 (i.e., Portland and surrounding area) should receive $5,405,977.34 for bicycle and pedestrian projects if funds were allocated based off applications received by region, mode, and dollars available. I sure hope the dealer doesn’t get a blackjack!

I just have to note the rail projects are $10MM shy of all the bike/ped projects. Corporate welfare, anyone?