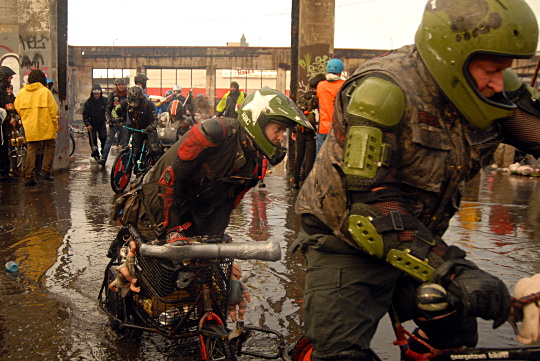 The charioteers never saw the rainbow arching over their heads. They would have been crazy to let their guard down that long.

About 100 soggy competitors and spectators came together in one to three inches of standing water in a crumbling Clay Street warehouse Saturday afternoon for the seventh annual edition of a Portland institution: a Ben-Hur style gladiator battle conducted on homemade chariots drawn by minibikes. 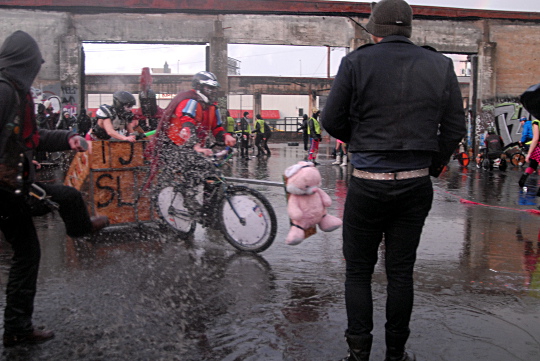 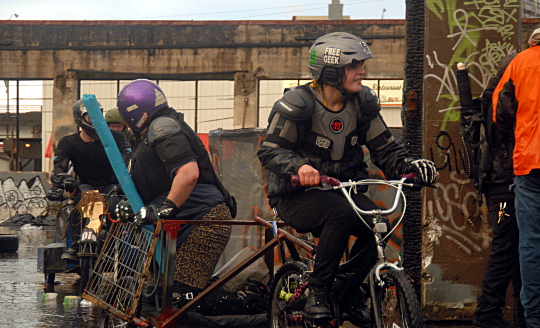 Under the supervision of a team of yellow-vested referees, the gladiators used smoke grenades, firecrackers, rotting tires and lightly padded blunt objects to try to knock one another off their contraptions. (The rules: A team is eliminated if both hands and both feet of either the driver or charioteer are completely separated from their vehicle.) 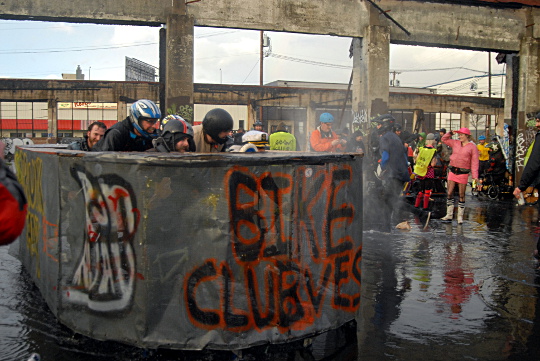 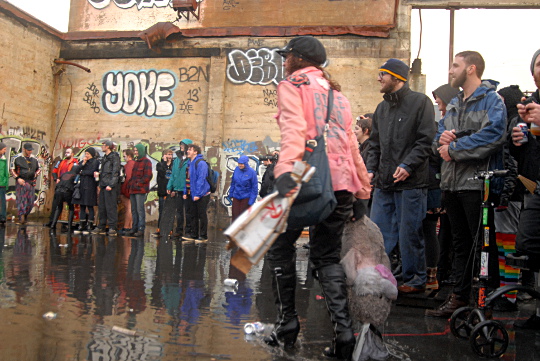 The setting was spectacular, and the weather added more excitement: after hours of drizzle, a sudden downpour kicked off the competition and then suddenly receded, leaving a rainbow visible over the open building while the competitors sloshed in circles after one another. 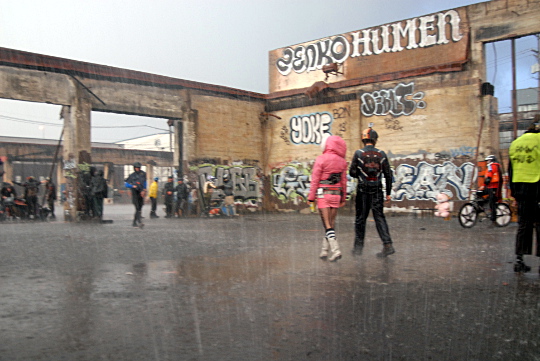 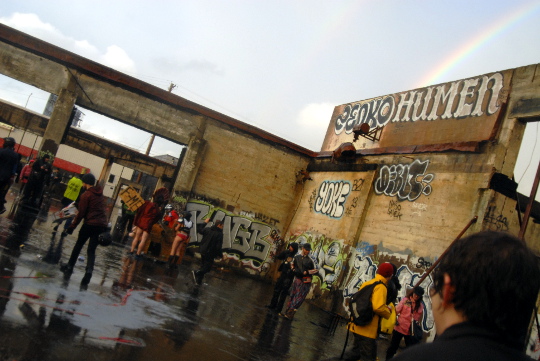 “One of my roommates dragged me out here,” said Eli March, 26, a first-time attendee. “I was impressed with the creative ways of interfering with the other teams. The grappling hook was probably my favorite, followed by the fishnet.” 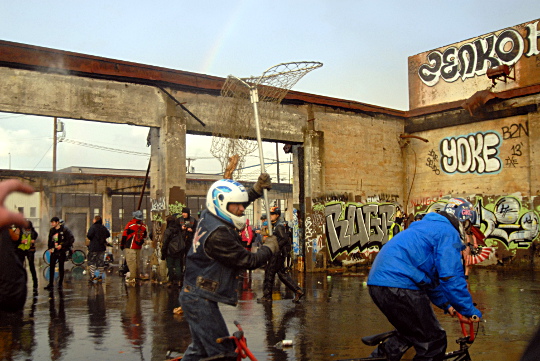 The grappling hook, which was made of rebar, didn’t last long on the field.

“I had to go ‘Dad’ on that,” said one of the referees, 28, who introduced himself as Sauce. He said he’d told its owner to put it away, even when she promised “not to throw it or anything.”

This year’s winners, Garai and Luke of the Pavement Princesses, managed to survive another highlight: a successful lassoing by a spectator. 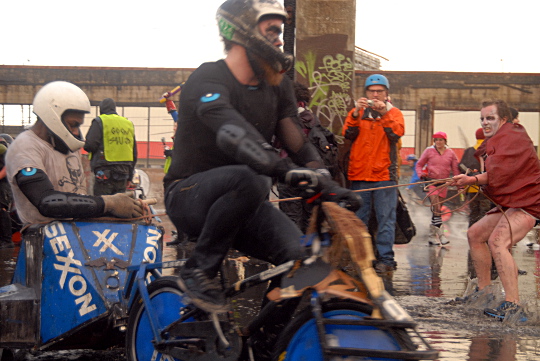 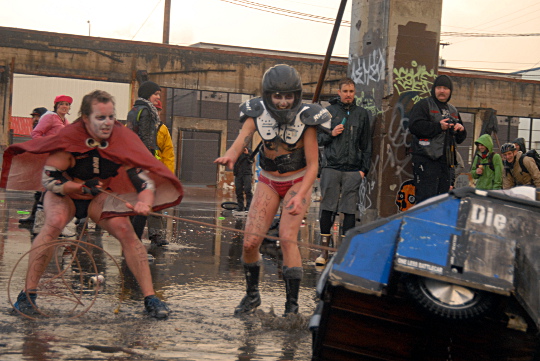 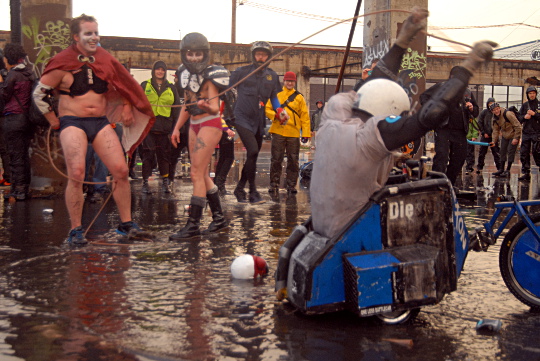 As the race wrapped up, the owners of this chariot (which had also been, I was told, their wedding carriage) decided to retire it in as spectacular a fashion as possible. (A bit after I got this photo, they were both riding in the back and kissing as the fire burned down.) 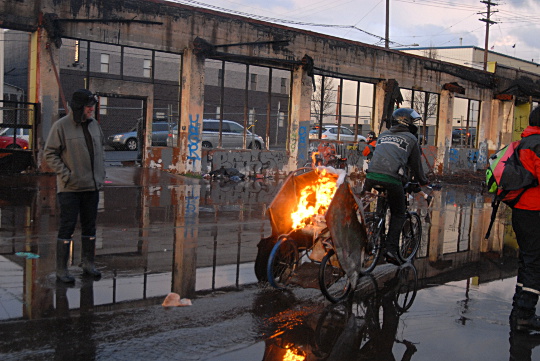 Chariot Wars was only one of the centerpieces of Mini Bike Winter, the wet-denim tradition of fun on bikes organized by the folks behind Zoobomb. As someone who’d never been to a Mini Bike Winter event and doesn’t own a single jean jacket, I wasn’t sure what to expect — but from the Sprockettes‘ kickoff dance performance to the laughs among longtime friends to the ecstatic embrace of Garai and Luke at the end while the crowd chanted “PPS” to celebrate their victory, I felt totally welcome and seriously charmed by a strong, fun-loving and mostly (though not, you know, excessively) healthy community. 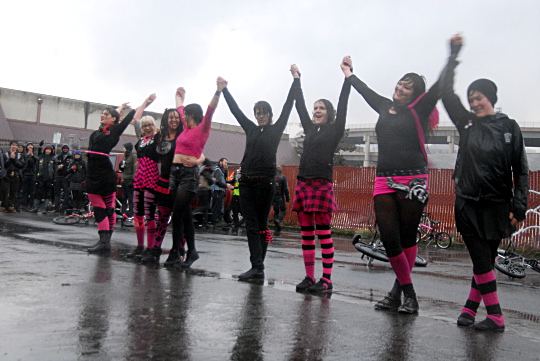 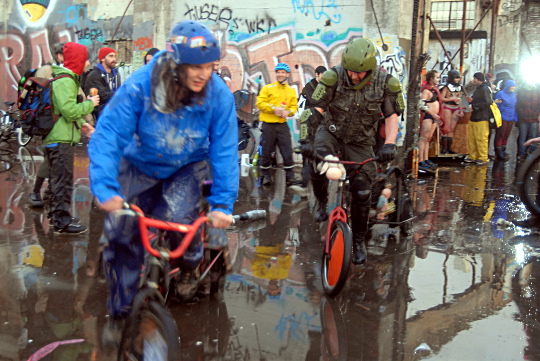 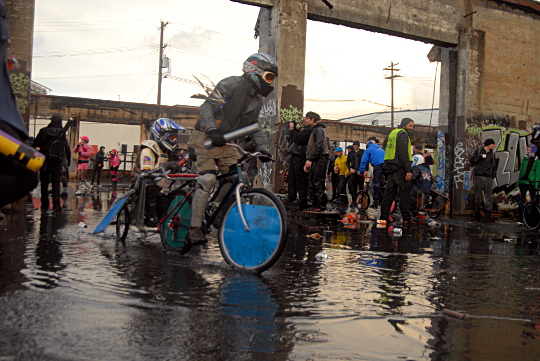 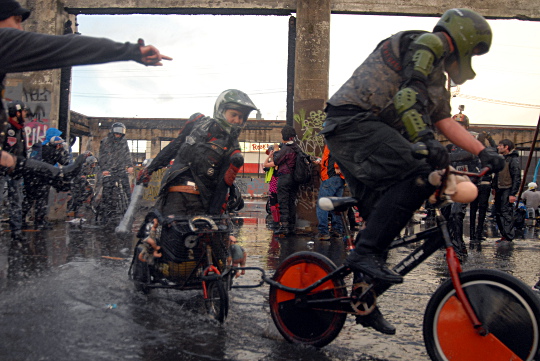 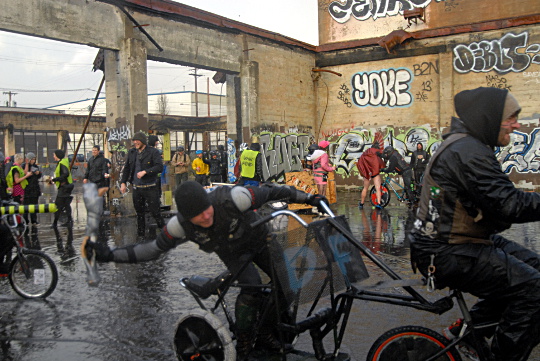 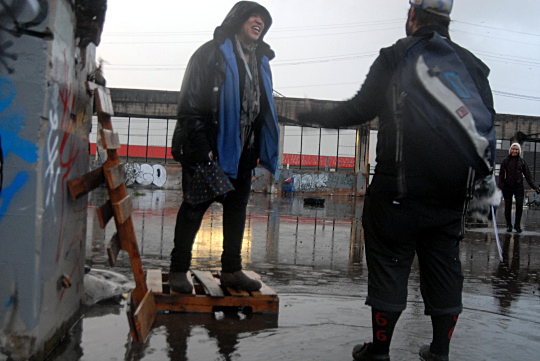 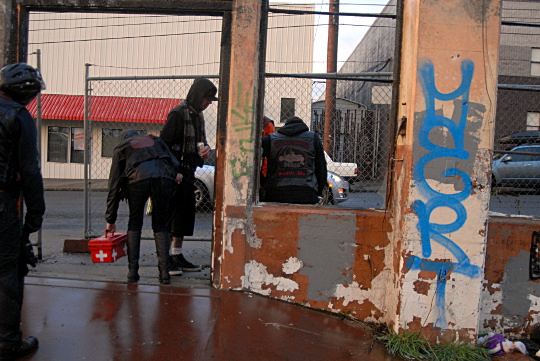 “I feel like Mini Bike Winter is the antidote to the cold,” said one of the spectators, 30, a Chariot Wars veteran who gave her name as Cinnamon. “It’s like a lot of heat all in one area. It makes a lot of sense.” 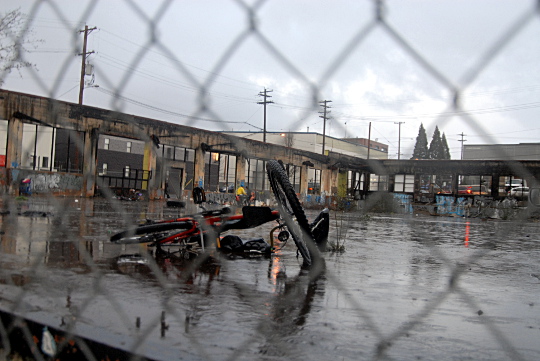 Isn’t that warehouse slated to be replaced with new live/workspaces? The signs have been up for years, but haven’t seen any progress…

Yep, it sure is, and no, I don’t know of any progress on this. I was curious too after visiting. The city’s website doesn’t show any activity on that permit since the real estate crash. The property is being managed by Killian Pacific, also the folks working on the Belmont Goat Blocks and some other properties in the area.

I wouldn’t put money on this lot being vacant for much longer, though.

I recently heard Killian Pacific say that they are currently working on it.

…it will be a sad and cold day in Portland when there are no more Minibike Winter chariot races due to lack of unofficial venues…perhaps when that happens it can be moved to the Veterans Memorial Coliseum.

I was actually just thinking about that. I know a number of previous Zoobomb MBW locations have been or are currently being developed. I personally think development is a good thing – I’d rather see a well-planned, high-density mixed-use development in a city than thousands of acres of vacant land. But still, it is a thought. The old chimney building on the bluffs, where MBW was held one year, is no more. The huge site next to 28th Ave Fred Meyer where it was held a few years back is currently being redeveloped as apt buildings & a New Seasons. Still, there will still always be a ton of wasteland/abandoned buildings/under-utilized land in Portland – just drive down Powell Blvd to see that.

Two years ago they had it on UP land. The yard bulls couldn’t do much when 400 people all show up at the same time.

I think Todd may have mentioned vaguely the venue that they used back in like 2009 – it was an old decommissioned offramp/bridge way out in N. Portland towards Columbia Blvd. Development be dmned “Ben Hurt” and now Chariot Wars, MBW will still prevail. In the nooks and crannies of Portland. It’s like the gingivitis to our biking community. Just acknowledge the morning breath because it’ll always be there!!

The giant hole behind Nordstroms downtown would have made a great venue, but they’re working on that, too. Wouldn’t it have been awesome if the City had gone eminent domain on that site and saved it for a permanent mini-bike winter venue?

I personally always liked the CHUNK666 Chunkathalon that was held outside Free Geek, just in the street, every year, before they stopped doing that event. It was always nice to see flaming bikes of death just causally whizzing around the neighborhood back in the day. And now, for a minute of silence…

Looks like a really fun event. Another reason why Portland is so great and unique. However, right before the event I was heading home on Clay St. in my car(yes, id rove that day) and a large mass of bikes, chariots and such acted very poorly when crossing MLK and Grand. Perhaps an alternate route would have been better with such a large crowd or they could have waited their turn at the light. Behaving with disrespect for the road and toward users on it only hurts the image of bikers even if only in the eyes of a small amount of folks in the vicinity.