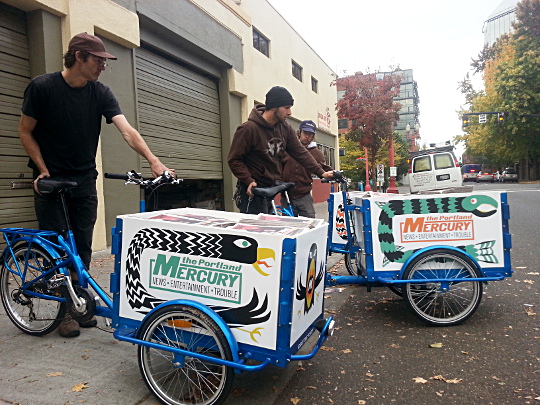 Michael Hanchin, left, drove a Portland Mercury delivery truck for 5 years before successfully pitching the company on a plan to switch to cargo trikes in the inner west side.
(Photo © M. Andersen/BikePortland)

Michael Hanchin couldn’t take any more hours behind the wheel.

“You would never know where there’s a loading zone,” the veteran Portland Mercury delivery contractor, 42, recalled Wednesday. “I think that’s what did me in.”

Hanchin’s back ached from crawling into the bed of his truck to haul out 18-pound newspaper bundles on hands and knees. His fuel and repair costs were eating up his contract income. Sometimes, when he couldn’t find anywhere to park downtown, he’d sit behind his wheel and glare at other contractors while they ate lunch in their rigs, hogging the available space.

Then, after five years of delivering the Mercury to inner Southwest Portland every Wednesday, Hanchin had a revelation.

He’d recently rigged his truck to remove its canopy, replacing it with a homemade contraption that kept the papers dry. But after seeing SoupCycle and other cargo bike companies around town, he realized he’d been thinking too small.

“The idea is like, don’t take the canopy off,” he said. “Take the TRUCK off.”

A few months later, Hanchin is no longer the Mercury’s downtown delivery-truck driver. He’s one of three downtown delivery-trike drivers. It’s a deal, Hanchin and his colleagues say, that’s speeding deliveries of the free alternative weekly newspaper, improving its marketing to the community and vastly improving the job of a newspaper deliverer.

Mercury General Manager Katie Lake said the cost to the company per copy is “comparable.” Hanchin’s truck, meanwhile, stays parked at his house, and he says the stress of his job has “evaporated.”

“I take the bus to do my paper route,” Hanchin said. “And that’s so awesome.”

Lake said delivering newspapers on a trike makes the Mercury part of its community in ways that truck deliveries can’t.

“Our readers are literally flagging them down asking for a fresh copy,” Lake said. “That’s pretty cool.”

Wednesday was the first day the newly named independent trike delivery operation, Cargo Bike Couriers, delivered all 10,000 Mercuries to the inner westside, from Portland State University up to the Northwest Industrial Area. It was also their first day with the newspaper’s branded decals on the sides of the cargo trikes.

Cargo Bike Couriers is part of Portland Pedalworks, an existing pedal transportation company that now holds the Mercury contract and subcontracts with Hanchin.

“Not to be presumptuous, but UPS started out as a tricycle company.”
— Ryan Hashagen, Cargo Bike Couriers

“We’ve been doing commercial cargo cycling for our entire careers, and this is just formalizing the service,” said Portland Pedalworks owner Ryan Hashagen. The company’s other operations include Icicle Tricycles and Portland Pedicabs.

Cargo Bike Couriers is part of a big new trend toward cargo-bike freight in central Portland. Firms like B-Line and Portland Pedal Power also offer pedal-powered cargo delivery services in the central city, combining them with direct marketing. In a presentation at the Oregon Transportation Summit in September, Portland State University professor Miguel Figliozzi presented new research explaining why B-Line’s cargo trikes are cheaper than larger vehicles for some trips: not so much because they save fuel (though they do) but because trikes’ small size and maneuverability cuts labor costs.

In a separate presentation on “sustainable freight”, Portland freight coordinator Bob Hillier wrote that “The private sector selects the most cost-effective mode of transport based on cost, reliability and customer needs.”

“Not to be presumptuous, but UPS started out as a tricycle company [with] trikes like this in Pioneer Square in Seattle,” Hashagen said. “We’re not stopping with this. We’ve got a lot more future possibilities up our sleeve.”

Great to hear this…very exciting…though make sure the trikes have improved reflective panels on all corners now that it is getting dark out there and they are making lots of stops. 😉

Did I miss the info on the trikes they are using? They do not look to be Worksman or Work Cycles…so whom? The wonk wants to know. 😉

The website is actually http://www.icecreambike.co and you can see our Icicle Tricycle photos at http://www.flickr.com/icecreambike

SO AWESOME. Now I’ll be even more excited to read the Mercury every week!

I like to refer to my paperboy days as my professional cycling career. 🙂 everything old is new again.

Reminds me of the economist who visited China in the 1970’s. He was given a tour of a dam project with thousands of laborers digging with shovels. He asked why they did not use more mechanized equipment and was told, “to employ our masses.” He replied, “if you want to employ more people, give them spoons, not shovels.”
This sounds pretty inefficient, unless labor is really cheap, which is not the case in Portland the last I checked.
The one way it could work (and I hope it does), is if Portland continues to make the downtown more pleasant to walk and bike in, and harder to drive trucks and cars through… which I hope it does!

Dweendaddy, that’s the way I would have thought about this too, until I caught the end of Figliozzi’s presentation (linked near the end of this post). In the context of a central city, where space is inherently scarce (because there are many valuable things for it to be doing) motor vehicles can actually be more labor-intensive than cargo trikes. The Merc’s new vehicles are immune to congestion, can roll directly to the door of a drop location, don’t require parking, don’t require an intermediate transfer to hand cart.

It’s true that before this change, there were actually two people delivering the route; on Wednesday there were three, though I’m not sure that’s permanent.

Anyway, what I’m saying is that in the case of this particular job, according to the Mercury and to CBC’s test runs over the last month, the situation you describe in your last paragraph is already true.

The shift to pedal freight in central Portland is no different than the reason most people who bike for personal transportation in Northern Europe (or modern Chinese cities, I suspect) say they bike: not because it’s cheap/slow but because it’s quick/convenient.

Chris I
Reply to  Dweendaddy

As they already explained, the downtown area is difficult to drive in. Using a 4000lb pickup truck that needs to pay for parking/find a spot large enough in close proximity to the delivery point. If the distance from the distribution center to the delivery location is relatively small, this could be a smart move. I think that is the case with the Mercury.

On a related note, does it seem weird to anyone that the Oregonian employs adults driving beat-up cars to deliver their newspapers instead of paper boys riding bicycles? I understand in the suburbs, but it seems like bicycle delivery would make more sense on the east side of Portland.

The graphics are awesome.

I generally haven’t been reading the Merc because I have no interest in the “You must attend every show/art opening/whatever or else you are not cool (which is the worst thing that could possibly happen to someone)” vibe in its copious arts & music coverage. But after reading this story, I went to its website for the first time and was pleasantly surprised by a nuanced and interesting piece about the Portland Water Bureau takeover proposal. Go Merc! Keep up the attention to local news and politics, give the WWeek some real competition in that regard and I will totally read you!

Does that mini-screed I just wrote about kids these days and their “cool” music not paying attention to what really matters (i.e. the gyrations of the political circus) mean I’m old? I think it at least means I’m *getting* old….

Every year when the Finder declares my neighborhood an uncool place to live, I’m actually relieved.

Wanted to call attention to the hidden message in my comment – Portland Mercury, this is really great marketing and gives you an opportunity to get some people to give you another try 🙂 Well done! Also making your contractor’s life better at the same time and decreasing environmental impact at the same time is awesome.

Congratulations, Ryan! Great to see your company grow and prosper over the years! And, well done Merc!

Re: “pedal-powered cargo delivery services”, Stumptown Pedalers Express / Magpie Messenger Collective has been doing cargo bike deliveries in Portland for 15 years. You’re not the last to know, the ‘Oregonian’ has yet to notice cargo bikes at all!

This is so cool to see. It’s great to see that others can find healthy, low-impact alternatives to delivering than driving a large truck through our city’s narrow corridors.

Welcome to the club! We will look forward to seeing CBC on the streets!

Yes Coach Dan, the graphics are awesome. They were created by Scrappers, the AD of Mercury. I have already noticed that although ups, usps and fedex drivers might actually be happy about the 16 LZH downtown that we have freed- they are totally jealous. Wednesday is now my favorite day of the week.

LZH=Loading Zone Hours, estimation based on total hours of downtown loading zones that were previously used for Mercury distribution on Wednesdays. Mercury distribution now occupy one LZ for no longer than 15 minutes, 1/64 or 1.5% of previous use. Take that, General Contractors with 3/4 ton pickups and NOTHING to LOAD!!!!