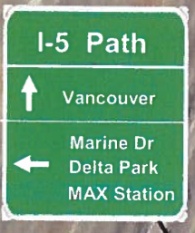 Mock-up of one of 29 new signs
created by ODOT to guide
bike traffic near I-5 bridge.

Last week we reported on unauthorized signage near the I-5 Bridge that was installed by a citizen activist to help bike traffic navigate the winding paths to Vancouver. The person who painted the stencils and posted laminated maps still hasn’t come forward to take credit, but many in the community are hailing them as a hero. The serpentine approach to the I-5 bridge has been a thorn in the side of many people for many years.

We followed up that story with word from the Oregon Department of Transportation (ODOT) that — despite sympathies for frustrated bike riders — they planned to remove the signs eventually because they were non-standard and hadn’t gone through an officially sanctioned process.

And then late Friday afternoon I got a phone call from ODOT Region 1 Manager Jason Tell with some very good news.

Turns out ODOT has a plan for 29 new bike-specific wayfinding signs all ready to go and they’ll begin installing them in the next several weeks. Below are images Tell sent me of what the signs look like and where they’ll go… 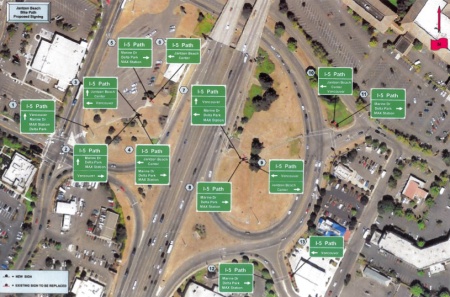 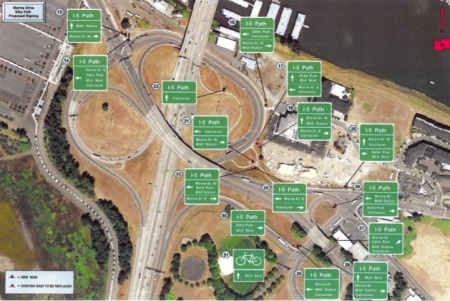 “Your timing is interesting,” Tell said during our chat, “Given how close we are ready to go on these. The designs are hot off the presses.” 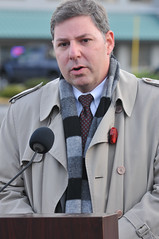 Before telling me more about the signs, Tell wanted to make it clear that removing the unauthorized signs is a very low priority for his agency. “Our maintenance guys don’t go looking for these things, they have much more important things to do.”

Tell said he’s known about the need for bicycle wayfinding signs “for a while.” He also said they’ve had these plans in place for some time now, but that they just hadn’t done anything with them yet.

“For folks that had the impression that we don’t think this was important, that’s just not the case,” said Tell. “For folks who think our process takes too long,” he added, “Well, it may.”

One of the reasons for the delay is that Tell says ODOT wanted to get the sign designs just right. To do so, they worked closely with the City of Portland’s Bureau of Transportation. “We wanted to make sure they mesh in with the way the City of Portland is doing them so cyclists don’t run into a bunch of different types of signage.”

ODOT’s plans call for 16 new signs south of Jantzen Beach where the shared-use path begins at the Delta Park/MLK Blvd/Marine Drive interchanges. Closer to the approach to I-5, 13 new signs will help people find their way up onto the bridge.

Tell hopes to begin installation soon, saying all ODOT has to do now is fabricate and install them. He says the project is expected to be fully completed before the end of the year.

I think we can thank the unauthorized signer for this. ODOT may have already had the signs designed, but they were not going to spend additional money on such a low priority (anything nonmotorized vehicle transportation related) until they had to. Maybe the unauthorized signs brought just enough attention to the matter.

I agree! There’s an effort going to draft this person (or persons) for a BTA Alice Award “in abstentia” if they don’t come forward.

Now if we can get PDOT and Portland Parks and Rec to improve the signing and road condition through the Delta Park connection.

From MLK? That’s ODOT as well. Interstate Avenue and MLK are 99W and 99E respectively. They come together at the Marine Drive interchange as unsigned OR 99, terminating at the north end of the drawbridges.

People who actually know the area should make sure to check the pdfs linked. I don’t exactly trust people who don’t ride through there often to avoid errors on the signs.

Easier to fix them before they print them.

That’s right, Mr. Blogger, YOUR timing to post an update on this years-long blunder—met by silence from ODOT—is interesting.

sorry Champs, I’m not sure I catch your drift.

To me, it’s ODOT’s timing that seems interesting.

Something about squeeky wheels, grease, and whatnot.

29 signs just for one bridge? Sheesh, that’s a complicated approach. Perhaps they should spend some time redesigning the bike access to the bridge so the won’t NEED over two dozen signs to make it legible.

Paul in the 'couve
Reply to  Joseph E

Actually it is 2 bridges, an overpass, and at least 4 streets, 1 complicated path only intersection, and 5 possible destinations / directions of travel. Add to that people heading north, south, east and west….. over a segment of path about 1/2 a mile long N/S with spurs heading E/W .

But yes, the route is too complicated and it needs signs. It took me a few trips to learn it.

Champs
Reply to  Paul in the 'couve

I learned it after two trips, plenty of credit due to the unofficial markers.

That’s a lot of signs. This is a good thing, don’t get me wrong, but it does strike me that the sheer number of signs necessary is (of course) due to how convoluted and confusing the bridge connections are. If the bike facility here weren’t such a classic example of cobbled-together “afterthought” bike infrastructure, far fewer signs would be needed.

middle of the road guy
Reply to  Rol

Is there anything that people on this site won’t complain about?

Thank you so much ODOT, Jason Tell and the crew!!!!!

Such glorious and awesome news in a time where all news is mostly negative.

This is more like the Columbia River Crossing project I had hoped for!

The local tradition of not waiting for permission, and eventually earning buy-in from the bureaucrats continues with this tale. Nicely done, anonymous wayfinding superhero and thanks, ODOT, for coming through on this.

We’re from the government, we’re here to help.

This is certainly amazing! I never thought it would ever get done. so cool.

This is a big improvement. A couple comments:

* The Marine Drive system is missing a sign.
At signs 17 and 18, it’s a three way intersection. The third approach leg has no sign. This is the primary route from Vancouver to Portland. The sign would read
* Marine Dr W
* MAX Station [right arrow]

I reviewed this plan a while back, and suggested that this third sign be put in, and Basil said it made sense to him. So hopefully there’s another sign on order…

* I also asked for a few other things, which were more pie-in-the-sky:

– a “5” icon for the route that follows I-5, so you can ride the route and just go from Portland to Vancouver or vice versa without differentiating between whether you want “Marine Drive” or “Delta Park”

– a better sign at Delta Park, where the southbound route diverges onto 99E and 99W. Up until that point there’s only one direct route to downtown Portland, but here they diverge.

– Sign 8 on the Hayden Island should have an arrow to the left pointing to “Jantzen Beach Center” so the shoppers from Vancouver can get to Target.

That said, the signs will be a big improvement, I hope they get them in soon.

The other issue is that all the signs are marked “I-5 Path” Which helps you know you’re in the right area, but it’s not really instructive on how to follow the I-5 route.

So, take the label off the top of the signs, and put a designation on which way to turn to stay on the I-5 route. Like, Delta Park would have a little “I-5” symbol, maybe even “I-5 South”

Again, I made these suggestions 2 years ago (before AROW was started in Dec ’09), but didn’t try to get any organization to back me up.

So now we have signs, which is a big help, but if you’re riding from Seattle to Portland the signs won’t tell you which way to turn to find Portland. Which would seem to be one of the essential elements of wayfinding.

Anyhow, it’s a step in the right direction.

Throw in a couple DO NOT ENTER and WRONG WAY signs facing northbound traffic on the southbound side and I think we have a winner!

Did Jeff miss your point? Do you mean this as “Keep Oregon Bikes Out of Washington”?

Paul Johnson
Throw in a couple DO NOT ENTER and WRONG WAY signs facing northbound traffic on the southbound side and I think we have a winner!
Recommended

Why? Both sides of the bridge are two-way. If either side needs to be closed, traffic shifts to the other side without needing detour signs.

On the other hand, I’d love to see enough bike traffic to warrant one-way signs.

Joseph E
29 signs just for one bridge? Sheesh, that’s a complicated approach. Perhaps they should spend some time redesigning the bike access to the bridge so the won’t NEED over two dozen signs to make it legible.

A bike-only overpass over the Jantzen Beach offramp behind Safeway would help bunches. However, that’ll happen about the time the CRC gets built.

As it is, it sends folks trying to find Expo MAX or Marine Drive West going east on Marine Drive.

While few folks riding north on MLK are going to be going to Expo MAX, there’s lots of employers west on Marine Drive.

Do any other regular riders/past regular riders have comments or clarifications? We can certainly put together a list of requests.

Paul in the 'couve
Reply to  Ted Buehler

#29 It is fine For Marine drive West, but for someone heading for Marine Drive EAST would be far easier and more direct to cross Union to the Bike lane north bound then cross Vancouver right onto Marine Drive East.

#26 Makes no sense to me. I am assuming you are coming off the ramp from MLK and facing EAST on Union and Vancouver???? So it says to turn left (meaning cross Marine Drive) to go to Marine Drive (E. & W ?) and the Max Station. But is says to go RIGHT to go to Vancouver when I would Go LEFT and cross to the Path on the North side of Marine Drive.

Ted Buehler
Reply to  Paul in the 'couve

#29. Correct. The left arrow should have “Marine Dr. W” added to it, and there should be a bottom panel with “Marine Dr. E” with a up/right angled arrow.

# 26. Correct. Left is fine for Marine Dr. E, but all other destinations are right.

Jonathan – did my comments / recommendations from yesterday afternoon get moderated off this page? (Paul and Ted have covered some of them)

I think they should leave the guerilla signage up and use the budget for this new signage to pave North Delta Park. Probably need more money, but also put in a diagonal crosswalk from Taco Bell to the bus stop.

Oooh! I just got it. You’re saying let all the bicycles go to Portland, then don’t let them back in, right?

I see some of the new ODOT directional bike signs have been installed on the I-5 interstate bridge corridor. I noticed a couple while riding northbound into Vancouver today. Nice to see. Bravo ODOT and thanks for highlighting the lack of these last month Bike Portland.