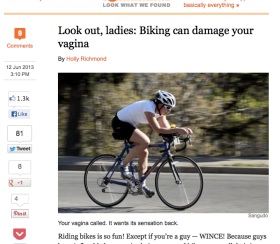 The headline is sure to grab some attention.

Lots of great bike stories to share from the past week, so let’s get right to it…

— The folks at the Copenhagenize have done some interesting work on bicycling behaviors based on video footage in “Choreography of an Urban Intersection“.

— This “Biking wisdom in 10 words” map by the NY Times is amazing. It collects comments from readers on bicycling conditions around the country.

— If you were ever curious into the history of the “marginalization of bicyclists” from a vehicular cycling perspective, sit down and digest this massive blog post by Bob Shanteau on the I Am Traffic blog.

— The gravel riding/racing thing is really taking off. Now it’s really arrived (or it’s officially over, depending on your perspective) now that the NY Times has devoted a feature article and some photos to it.

— Courtroom deal-making lead to just 90 days in jail for a hit-and-run that killed a 48-year old man who was bicycling in the Bend area.

— I don’t understand the anime intro, but this video of robotic, underground bicycle parking in Japan is amazing.

— A reporter from The Atlantic was on the Portland World Naked Bike Ride.

— WNYC has done some solid reporting about the software problems some folks are experiencing with the new Citibike bike share system in New York City.

— While software problems have gained a lot of media attention, there are far more positive experiences with Citibike than negative ones. On that note, The New York Daily News begins one of their stories with “New York City isn’t going to hell in a bike basket after all.”

— And Hasidic Jews in the Williamsburg area of NYC, who have in the past blocked bicycle infrastructure, are now clamoring for Citibike in their neighborhoods.

— And the final word (for today) on Citibike is this awesome new video from Casey Niestat: “Citibikes are a pain in the ass” (spoiler: they’re not):


— Is cycling bad for your vagina? Apparently it can be if your saddle position isn’t right. Or, at least that’s the contention of a study recently covered by Grist.

— Raquel Nelson, the woman who was charged with vehicular homicide when she tried to cross a street with her son and he was struck and killed by someone driving a car, has finally been cleared of the charges.

— It has happened yet again: After investing in infrastructure and creating a comfortable bicycling environment, Vancouver (Canada) has seen a massive jump in bicycle use.

— The trend of older folks moving to cities will have a huge impact on transportation. A story in Business Insider reports that many seniors are looking for the vibrancy of a city as well as the ability to get around without a car.

— Portland has Street Books, a bicycle-based library for folks who live on the streets; but Seattle has a public library on a bike.

— If you missed the recent Velo City conference in Vienna (it looked amazing), check out daily recaps via the European Cyclists Federation website.

— This is a hilarious take on Americans’ “clown-like” driving habits.

— Inspired by the now-famous rant from the Wall Street Journal’s Dorothy Rabinowitz, Politico took a closer look at the actual bike lobby and found that yes, it exists, but no, it’s far from “all-powerful”.

— The Oregonian has a history of promoting a narrative that people on bikes are hot-headed, crazy radicals. Their recent story, Are Portland bicyclists showing signs of an unfortunate new trend? covers the “increasing numbers of instances where two angry, fist-clenched bicyclists are facing off in the Rose City.” Huh?!

Amusing citibike video. But it sounds like he mushed the numbers to take advantage of Citibank, by quite a bit.

If he just locked up the bike in his place, his expenses go way down, and he cuts his commute by 6+ minutes a day. That’s ~26 or more hours a year! He also gets his fixed gear (which he obviously prefers, since he’s having fun doing it,) and if he didn’t, well, get a different bike!

Still, cute video. I had my hesitation about renting bikes in cities, and this renews my hope. I will definitely give it a shot when it shows up here. The problem I see? I live 5 miles south of Downtown. I seriously doubt a station will be anywhere convenient for me to use. I’ll just walk otherwise. Guess I’m weird in that I love to walk primarily, bike secondarily.

The Japanese underground parking is proof that in some parts of the world, the 21st century actually HAS arrived. I think I could watch that video all day.

As to the Mr. Money Moustache “clowns in cars” article, I truly do feel like an asshole toodling around town in the automobile.
Makes me feel like I’m riding around in a four-wheeled, 2-ton, metal middle-finger.

The link for the story about the Hasidic Jews doesn’t go to that story, but about the software for the Citibikes and how it doesn’t work/was known to be buggy and have problems. Just FYI.

The first step is admitting that you have a problem.

Let’s face facts: the Hawthorne bridge is not without tense moments. Dangerous passing and the brow-beating of slower riders is not unknown to me during the afternoon rush hour.

Hopefully, that light rail bridge will help with the recovery.

Yep, people are being pretty uncivil on the Hawthorne. Probably driven by the nice weather drawing out less-experienced riders. All the Freds who feel a need to race on the bridge should remember that if they want a real competition, they should head out to an OBRA event…it’s not much of an achievement to blow away someone who hasn’t been on a bike since last summer.

I wonder how people riding those heavy, slow dutch bikes in Amsterdam handle the hasty, impatient types in their city. On the Hawthorne, a couple cool headed riders abreast of each other could possibly help maintain a responsible rate of speed during the 2-3 minute crossing. Whether or not there’s a posted speed limit for the Hawthorne MUP, given that paths dimensions, with other people present, over 12 mph would seem to be pushing it.

Unfortunately, I can pretty much guarantee that 2 moderate-paced riders trying to cork the bridge walkway and control the pace would just encourage wannabe racers to pass even more unsafely, squeezing around them one way or the other. I don’t see a substitute for personal responsibility here: wait to pass until it’s safe, and when you pass, leave enough space between you and other cyclists and/or pedestrians. In other words, do what we always want motorists to do…pretty revealing how many cyclists don’t get this / are unwilling to do it.

The Atlantic article ends with a note about how 5,000 naked riders is more than commute every day. That seems like a very low number for Portland bike commuters.

Chris I
Reply to  Varner

The author was wrong on both the number of participants in the WNBR and the number of daily commuters in Portland. I have no idea where they got their numbers.

Elliot
Reply to  Chris I

It looks like the reporter didn’t actually come up with the more WNBR participants than commuters figure, but instead used a quote from a ride organizer who said as much. The reporter probably should have fact-checked before using the quote, but regardless, it’s incorrect. There are approximately 19,000 daily Portland bicycle commuters.

Says who? I don’t think there is an accurate number available. But 19,000 is very low if you ask me. I think a more accurate number of daily bicycle riders in portland is “over 50,000”

In a fit of masochism I read the O article about ragin` cyclists (and to post “Stay classy Oregonian!”). It is every bit the traditional yellow journalism that we’ve seen since the early 1900’s; this means outright lies and demagoguery to sell ink on paper.

Sadly the comments! are more balanced than the article. Sure there are the normal amount of bike haters, wouldn’t be the O without them, but amongst that are a lot of people commenting (where is the attribute for droll apathy?) “oh wow people on bikes are just as asinine as people in cars i’m shocked just shocked”

I wonder what Les Schwab has to say about the drunk, hit and run by one of it’s employees?

Not from the Roundup, but today via the Oregonian/AP, is the first time I recall hearing the story about the Gonzaga law student DUI-hit and run whose victims were a father and child being pulled in a bike trailer. Serious injuries but fortunately no fatality. Basically good reporting from Spokesman-Review:

Two things: I grew up in a Jewish neighborhood in LA. Many Orthodox and Hasidic in our area rode bikes on Saturday–less un-kosher than driving, they believed. The Les Schwab exec? Schwab should require this dude to cycle to work for a year to keep his job–otherwise, cyclists in Oregon should remember that there’s plenty more places to buy tires for our cars than Les Schwab.

Not sure if it makes any difference, but the guy who got killed by the hit-and-run in Bend was walking across the street with his bike. Also, not in the crosswalk, which was probably a factor in the legal outcome.

It took the dude in the video 16 minutes using Citibike to get from his apt. in the Village to office in Tribeca door-to-door? 1.3 miles? Most New Yorkers could walk that in 20 easy. I used to commute on foot from apt. in Chelsea to office in Midtown (2.3 miles) in 40 minutes comfortably, about 34 minutes if I stepped on it. Cost: $0. NYC is made for walking — everything is compact, it’s easy to zip across the street (jaywalking — a birthright), no right-turn-on-red, none of this pushing buttons crap like in Portland, where it takes so much longer to walk anywhere. Sure, have a bike for fun and recreation, errands and whatnot, and particularly inconvenient or long commutes. Sure, Citibike might be very well be useful for certain trips certain places at certain times. But for commuting that short a distance? Ridiculous waste of money, no time savings to speak of, and no where near as much fun.

I was just in NYC (Manhattan and Williamsburg) this weekend. The Citibikes are a great hit there, and look very well designed. Most bike racks had the majority of the bikes in use, though there were always some available.