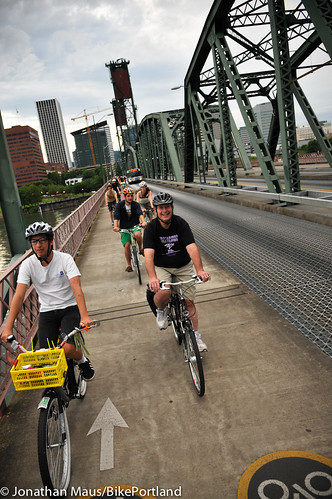 On Saturday, June 8th the bicycle counter on the Hawthorne Bridge set a new record with 9,834 recorded trips. The previous record, 8,305 trips, was set on Tuesday, September 25th of last year. That huge daily total on June 8th led to the week of June 3rd being the highest number of recorded trips for a week with 54,118. It’s very likely that June will be a record month for bike trips on the bridge with over 100,000 trips already recorded.

While June is typically one of the busiest months for bicycling in Portland, it’s worth noting that the June 8th trip total was inflated by the World Naked Bike Ride (which set a record of its own with over 8,150 participants).

The counter was installed on August 8th of last year and it logged its 1 millionth trip on April 1st 2013.

Since being installed, the bike counter has been a huge success. The $20,000 counter was donated to the City and it has performed as advertised. In addition to the marketing and encouragement boost the counter gives passersby, its counting prowess is also very valuable from a data collection standpoint. In fact, in the recommendations from their recent 83-page research report on bicycling, the City Club of Portland said the City should, “purchase and install additional automated bicycle counters to gather accurate bicycle ridership data.”

The bike counter on the Hawthorne Bridge has also found its way into local bike culture. Tomorrow (June 18th) is the Hawthorne Bridge Bike Barometer Pedalpalooza ride. Organizers of the ride are encouraging folks to do laps on the bridge to set a new record of 10,000 trips.

— Read more about Hawthorne Bridge Bike Counter in our story archives and check out daily, weekly, and monthly stats via the manufacturer’s website.

You’re probably right that the WNBR helped inflate those June 8th numbers due to all the riders headed for the start point. The ride itself, however, didn’t even go over the Hawthorne Bridge!

As for tomorrow’s Pedalpalooza ride, I’m not sure I can make it, but I’ll definitely commute on the Hawthorne instead of the Burnside tomorrow just to do my part.

Doesn’t encouraging riders to do laps defeat the purpose of accurate accounting? At a minimum, it would seem to give opponents fodder to argue the counter numbers are artificially inflated.

It’s one day. I hardly think that will throw the numbers off in the long run. Let people have their fun.

Doesn’t encouraging riders to do laps defeat the purpose of accurate accounting?

You know how they do the Zoobomb Century? (For those not in the “know” people on tiny bikes basically ride down the Washington Park hill then take the MAX back up enough times to equate 100 miles) – we should do a Hawthorne Bridge Century! Just keep circling the damn thing in a big group, loop under around go around and ding it again to inflate the numbers! 389! 495! 512! Let’s see what # you can hit with each rotation all day long! fatcyclist.com Does a yearly 100 Miles to Nowhere event we could make it a part of! WOOT! I’m jazzed!

Two weeks of missing Pedalpalooza due to appendectomy gives me zany ideas! I’m stoked to join in on the tail end of this damn thing!

Two weeks of missing Pedalpalooza due to appendectomy

friends should be towing you in a trailer/tandem/trike…

The detour on Weidler is probably also contributing to higher numbers, as all the Steel bridge people headed to Broadway instead.

Erm, which would affect Hawthorne not at all. Disregard 🙂

The Weidler detour is over as of this morning. Steel bridge was open to all.

Ha! I thought that the headline meant that the counter breaks every day.

I noticed a couple weeks ago on a sunny weekday it said 12 thousand and some around 5:00pm and I thought, no way, as I had never seen it over 6k. Obviously there was some sort of malfunction, which now I question how accurate the counter is?

Yes, the barometer displayed a big number that day (June 4th). The technology for the counter has a dual recording system in place. The data is sent to the display (what people call the bike counter) via high-gain radio antennas on the bridge. The data is also sent wirelessly to a server that is run by the vendor from whom we purchased the counter.

The day before the erroneous display we had replaced an antenna on the eastbound direction. We had to briefly turn off the display unit to hook everything up. Apparently that caused the display unit to not reset at midnight that day as it usually does. Thus, by the 2nd day the counter was displaying two days’ worth of data.

The display did reset that 2nd night as usual, and has every day since.

Keep in mind that though the display was incorrect it did not affect the collection of the data. You can see the actual totals for those two days–and for every day since the counter became operational, at this link (http://portland-hawthorne-bridge.visio-tools.com/).

I was a part of the WNBR crowd on the Hawthorne–if anything, the counter was LOW–hundreds of people took the lane at the pinch point where the East Bank ramp joins the bike path and rode the gridwork until it rejoined on the other side….I was on a tandem and my co-pilot (wife) was not having any taking the lane on that sketchy surface, but a huge number of people did…..as for the “effect” of the WNBR those are still trips. If a bike event draws thousands of people downtown ON BIKE then count em up!

How did the record get broken last Saturday? Was it turned off during the Bridge Pedal last year?

Bridge Pedal was on the roadway.

You can see a big jump that day if you check the daily stats.

They really need a counter on the Steel Bridge and Broadway bridges also. Doesn’t need to be fancy. Just a number people can see the volume of use on the main bike arterials.

Based on this I bet the WNBR numbers are low, considering that the count for that day looks be be about 4000 more trips than on a normal Saturday. And many if not most of the trips returning to downtown from the East side end point would have occurred after midnight.

Don’t forget that it was also the day for the Rose Parade as well. Perhaps they (whom ever they are) should run a data scan of the trips over the bridge on a hourly basis to see how much WNBR and the Rose Parade affected it. If those extra 4000 trips were recorded late afternoon/earily evening I’m guessing the WNBR numbers are low (which I suspect anyway). Because if most of them were later in the day, you’re looking at 1/3 -1/2 the WNBR came over one bridge, and though I’m sure a large number of them did take the Hawthorn, I doubt it’s as high as 1/3 -1/2 of them.