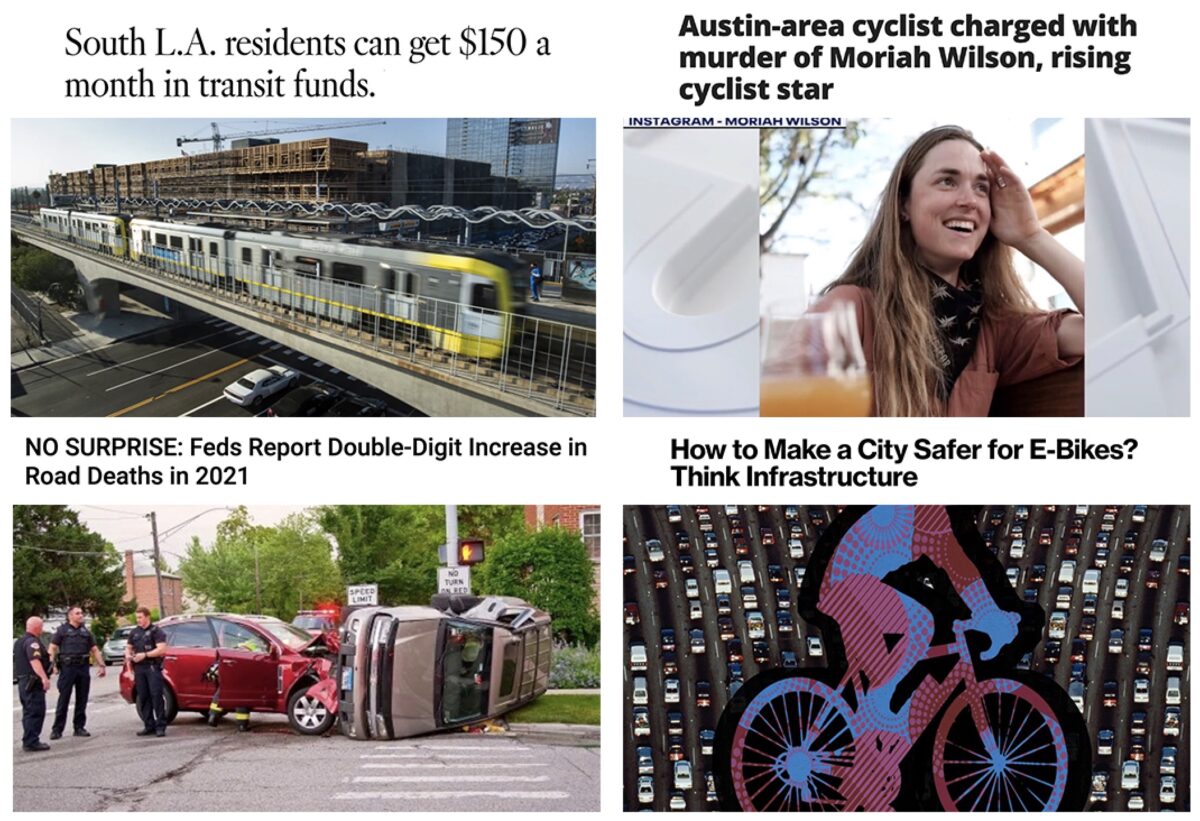 Welcome to another wonderful week full of potential and hope! Don’t you just love Mondays!

Even Ford says drive less: I’m not sure what to make of this (greenwashing?) but the European chief of Ford Motor Company is behind an initiative that encourages people to “park the car.”

Different bikes, same problem: Wait a second… So you’re telling me that the same crappy infrastructure that prevents people from riding non-motorized bicycles will also prevent them from riding electric bikes? Who could have seen that coming?!

America’s traffic death epidemic: The latest national figures for traffic deaths are out and they are terrible. NHTSA says not only did nearly 43,000 people die while using our transportation system in 2021 (highest total since 2005), but the number of people not inside cars went way up yet again.

African rider makes history: Professional cyclist Biniam Girmay from Eritrea became the first ever Black rider to win a stage of Grand Tour with his sprint victory in Stage 10 of the Giro d’ Italia (then had the champagne cork knock him out of the race!).

Figure it out, journalists!: David Zipper’s latest in-depth piece lays out the reasons the media gets crash reporting so wrong, including the all too common practice of copy/pasting biased police statements.

Mo Wilson: A very tragic case in Texas where authorities are on the hunt for a suspected killer who shot a rising cycling star.

Oregon land-use changes: Insiders are hailing a sweeping set of new laws to reform parking and transportation policies that moved ahead at the Oregon Land Development and Conservation Commission last week.

24 hour speeding: Last week we learned a jaw-dropping fact: That because of state politics and societal normalization of dangerous car driving, New York City’s speed cameras are turned off at night when people tend to speed the most.

How to win money and influence cities: Transit Center has a how-to guide for advocates on how to make sure as much of the “highway” funding as possible from the Biden Infrastructure Law goes to transit.

Lax enforcement: KGW did a segment on how so many drivers have expired tags — part of a widespread shift where car drivers don’t fear getting pulled over by police so they simply don’t pay registration fees and many people don’t even bother to have plates these days. These ghost cars are dangerous and we need more attention on this issue!

Universal Basic (Transit) Income: Looking to level the playing field between cars and transit, Los Angeles officials are giving all residents of one section of their city $150 to help pay fares.

Tweet of the Week: Bike Lane Uprising rolled up on a truck driver trying to unload a new vehicle while parked in a protected bike lane. So they decided to hold their ground and a face-off ensued. Check the tweet to see how it played out…

So this @Porsche delivery thinks I’m going to move so they can unload in the @DesplainesBkLn They are wrong. It’s a nice ass day and I got nowhere to be. @AldReilly pic.twitter.com/AY5bPjU5Lw

—
Thanks to everyone who sent in links this week. If you want to sponsor this column, please get in touch!

Just want to give a shoutout to Bike Lane Uprising. They do so much good work in Chicago. It’s worth checking out their app/maps of bike lane obstructions – not a whole lot of data in Portland but definitely can see areas in town where there are chronic issues.

Tesla car carrier tractor/trailer rigs have been routinely parking in the MUP on SE 4th Ave. at Division Pl. for years. This short, heavily used on-street painted MUP connects the Eastside Esplanade MUP and the Springwater Corridor MUP. There are no sidewalks, with private property chainlink fences or building walls built right to the curb. The MUP serves southbound bike traffic and two-way pedestrian traffic. The Tesla warehouse has a parking lot parallel to the street which could possibly be redesigned for the these rigs to pull through. Or perhaps this property does not suit the use of frequent loading and unloading big semi tractor-trailer car-carrier rigs.

Here’s an idea: Vote for the charter reform in November, which will empower functional city agencies that will be able to enforce rules, unlike our current clown show where city bureaus are run by amateurs.

I mean that whole area is a total mess. The best solution would be to extend the Springwater path along the RR ROW to Caruthers, and build a dedicated, curb separated lane on the North Side of Caruthers to connect the Springwater, Esplande and Tilikum Way paths together.

In the meantime, I guess the best option is to complain to PBOT and try and bully drivers out of it. But that’s not for the faint of heart

If anyone is interested, that’s not a Porsche in the car carrier taking up a bike lane, it’s a McLaren.

That car costs over one million dollars and the dealership can’t come up with a legit space to unload it?!

If only there was someone to block Elon’s McLaren delivery: https://youtu.be/x3tlVE_QXm4

The city could make a big dent in the expired tag issue in short order: have the parking enforcement start tagging cars with expired tags with tow notices, and then tow them. Publicize the policy to strike fear into these slackers.

Todd/Boulanger
Reply to  Chris I

It also gets even more perverse…something that we learned prepandemic, as a lot of Oregonians moved into Vancouver’s Westside (and parked on the street with Oregon plates)…VPD and Vancouver’s parking staff ‘almost’ do not want to enforce the WA registration law / and parking code since its ‘too much work etc.’ to track these scofflaws down cross border.

SolarEclipse
Reply to  Chris I

My favorite game now is when I go shopping as I’m walking to/from the store I see how many cars have expired tags or no license plates. It’s easily 10-20% just in the rows I walk up/down.

It was quite apparent that Ford was anti-car as soon as they killed off their last cars in the US. I wonder how that statement from the EU chief would go over coming from US leadership here in pickup truck land?

Not all cars, you can still buy a 760HP Mustang. Since this came out of the EU where no cars were dropped from production I would say Ford is very Pro-Car. How would the park the car statement go over here in the US. Just like in the EU it will be ignored.

Sure, they keep making the mustangs to have “a sports car” but even it’s days are numbered as seen by its SUV-ification into the Mach-E model.

I just wanted to point out that the link in the section about Biniam Girmay does not go to an article about him, but instead to the latest “Giro rider of the day” article, which is currently about Giulio Ciccone. I could not easily find a way to get to previous rider of the day articles, including the one for Biniam Girmay (day 10).

Thanks for the link update, what an awesome story. Well minus the absurd twist of getting a champagne cork in the eye. Girmay may be the first, but he certainly won’t be the last. And the dreamer in me wishes we could see some of our generation’s greatest African runners (Bekele, Kipchoge, et al) hammering up towards a mountain top finish.

Those cars without license plates are terrifying. When I see them speeding down the street and driving erratically usually with significant body damage, it scares the hell out of me. They can literally kill people with impunity. They should immediately crack down on cars without plates with zero tolerance.

I agree. I would suggest impounding and selling cars whose tags expired more than 6 months ago.

Chris I
Reply to  Jay Cee

No plates should be an immediate tow and impound. Proof of ownership and full paid registration needed to retrieve the vehicle. Please raise my taxes to hire more parking enforcement.

In addition to the “ghost cars” making it impossible to ID dangerous drivers…you also have the chronic (prepandemic) issue of over entitled drivers driving around with smoked license plate covers that make it almost impossible to read the plate correctly of a fleeing motorist even in good lighting. [I just don’t understand how this is acceptable for the last 2 decades with anyone in authority.]

This is another City of Portland complaint-driven enforcement category. Lots of us get away with stuff because codes and regulations aren’t enforced–but if enough people report expired tags it becomes data and the city will roll over, groan, scratch itself and just maybe start to do something.

An unlicensed car that is not reported, ever, will get a ticket never.

Regarding “Figure it out journalists”: thirty years ago, a friend of mine in a Catholic religious order told me that the easiest way to get newspaper coverage of your story is to write the story for the journalist, which is exactly what he would do. He would draft a “press release”, which was, effectively, a story he wanted the newspaper to publish, then send it to the appropriate editor/journalist at the newspaper. Nine times out of ten, the journalist would copy what he wrote, word for word, and publish it under his own name in the newspaper. So, it does not surprise me in the least that newspaper journalists would regurgitate a police media release about a road traffic collision without further investigation. Kudos, however, to the television journalist who did a deeper dive.

Musk was only ever a hero to tech bros and crpyto bros. I don’t remember progressives fawning over him. Most progressives I know have hated Musk for years because he’s a right-wing welfare capitalist who started his business with wealth directly generated from slaves.

I think this ‘darling of the progressives’ memory might be something you just made up.

I think some people don’t like Musk because he has done more for climate change than nearly any other individual, demonstrating the power of capitalism, yet his politics are “wrong” and we know capitalism is bad.

I don’t care about a lot of “darlings”, so I totally get not caring about Musk. But hating him? That’s such a waste of energy. How would the world be better off without him and the things he is building?

I want to thank BikePortland for highlighting violence against women on bikes, especially the female leaders of the pack. It’s the tall poppy syndrome, jealousy and a mentality of scarcity.

I seriously think sometimes I need to wear a bullet proof vest while riding or leading rides. I know the police wouldn’t have my back after the police reform protests and gun safety advocacy.

Would anybody on the ride ‘have my back’ if something bad went down?