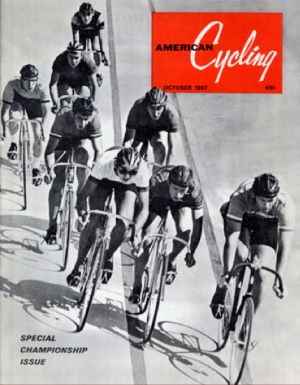 While many people think of only bike commuters and naked rides when the topic of cycling in Portland comes up, our city also has a proud tradition when it comes to racing. We shared a glimpse of that legacy back in 2011 through James Mason’s amazing photographs of the local racing scene in the 1960s, 70s, and 80s. Now we’ve come across another interesting artifact of our racing past: The 1967 issue of American Cycling magazine that featured Portland on its cover.

Hoffman titled his piece on the 1967 Championships as “Portland’s Finest Hour.” Here’s how he set the stage in the opening paragraphs:

“The red, green and blue surface of Portland’s new velodrome shimmered in the near 100° heat. Around the perimeter of the steeply banked track the flags stirred only slightly in the gentle breeze. In the grass covered infield scores of officials smartly attired in their fresh white uniforms attended to a myriad of details. Two large circular canopies provided shelter for a collage of riders in multi-colored jerseys, shining bikes, spare wheels, and a seemingly inexhaustible supply of fresh fruits, cases of orange juice, yogurt, milk and ice cream. The bleachers were overflowing with spectators, many of whom had never before seen a bike race, while local TV crews prepared to broadcast the races live and in color. Portland and the Pacific Northwest were about to witness their first National Amateur Bicycle League Championship and the Alpenrose Dairy, hosts of the big event, had gone overboard to make it one of the finest on record.”

Hoffman’s story is a great read. He details all the racing action with the names of the competitors who came from all over the country to race in our backyard. Looking back, Hoffman wrote via email that he “Can’t believe that was 46 years ago.”

Here are a few more images from the issue: 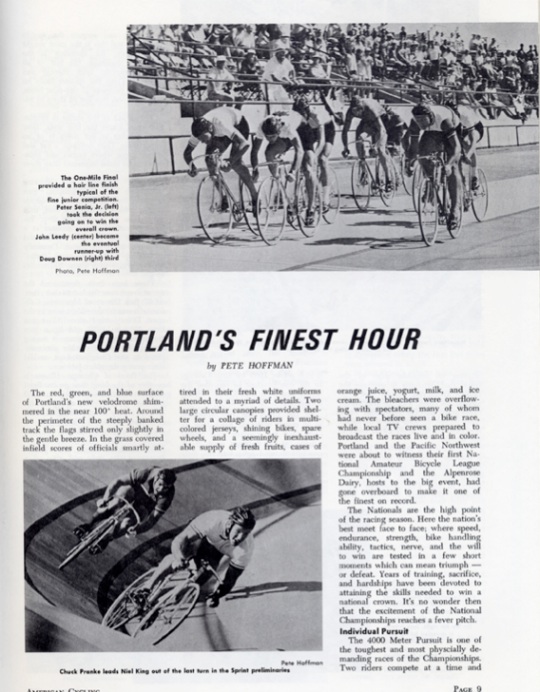 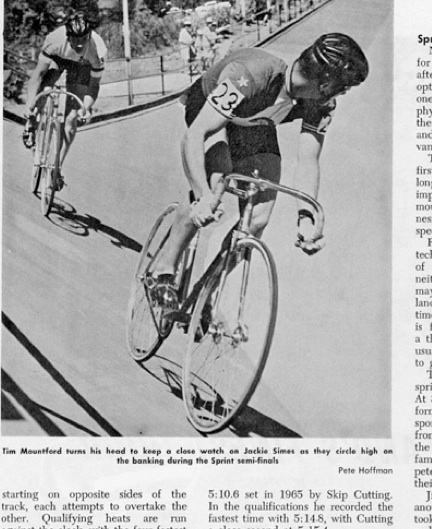 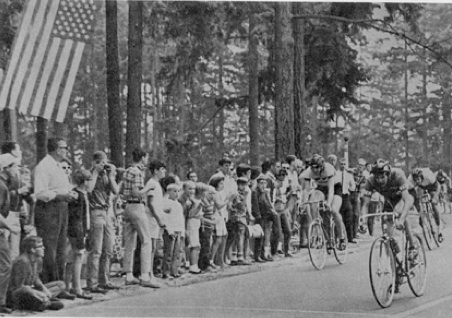 You can read Hoffman’s full account of the 1967 Championships and see more photos here.

Nice. (That last picture must be of the track at Mt. Tabor…with all those trees. What ever happened to the velo track there?)

Not a track but the normal roads. There are several possible road courses on Mt. Tabor, all of them good. Haven’t been to Portland for a while but I’d assume the roads are still there….unless the volcano has erupted. Mt Tabor also had Portland’s only Soap Box Derby venue.

I stood in the Schwinn shop in 1968, gazing up longingly at the Paramount Track bike, thinking that there wasn’t enough time in life, or yards enough to be mowed in my home town, to earn the $600 on the price tag.
It was made of “unobtainium”.

This was the era in which my love affair with the bike began.
Luckily for me there were older boys and men just like the ones featured here, around to inspire me.
While my neighbors brothers got called off to VN, and the times were wrought with social strife, I escaped to the back roads and pedaled the world away from my mind.
Bicycles changed my world outlook more than anything else.
It is nice to see these photo’s and read about the local flavor.
Nice blast from the past.
thanks.

Where’s the aforementioned TV footage?? I want to see that race broadcast live and in motion.