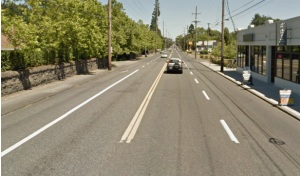 The Bureau of Transportation has announced their intention to move forward on the re-striping of SE Division between SE 60th and 80th. The decision comes after a public meeting held Tuesday where neighborhood residents and other stakeholders expressed strong support for the “road diet” and addition of bike lanes as a way to improve safety on the street.

PBOT reports that 50 people came to the meeting and a “large majority” supported the Phase 1 improvements which include: 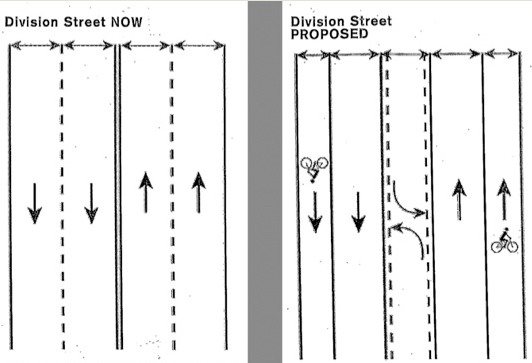 Graphic created by the BTA showing before and after lane configurations.

Those loop detectors will be key to maintaining traffic flow, even with one less standard vehicle lane. The signals at 71st and 76th, PBOT says, are currently timed and they changed regardless of whether cross-traffic is present. “The pedestrian push buttons and loop detectors are designed to keep traffic flowing on Division,” PBOT says, “Even with the removal of one travel lane, PBOT’s traffic model shows these signal improvements will provide a reduction of travel times for vehicles moving through the project area.”

This project came out of PBOT’s High Crash Corridor program which aims to tame major arterials that have a higher than average concentration of serious injury and fatal collisions. The re-configuration of lanes on Division is expected to improve safety for all road users, not just people who ride bikes.

PBOT has set aside $100,000 in the current budget for the project and it’s expected to begin this summer. Learn more at the project website.

Amazing! These improvements will improve things a lot for me, living a few blocks off Division at 70th. Using Division to get to Lincoln will be so much faster, and the ped/signal improvements will be excellent as we cross Division at least once a day walking to Mt. Tabor. Currently crossing Division sucks and walking that sidewalk with no buffer from 40+ mph traffic really sucks. Really happy to hear the project is moving forward!

“with no buffer from 40+ mph traffic really sucks”

speeding is a mild form of sociopathy. if pbot and popo were serious about the enforcement of traffic statutes that *really* matter there would be far more enforcement of speeding.

PBOT doesn’t do speed enforcement, nor are they the ones to direct or budget for PPB. That would be the Mayor at this time.

ever heard of a speed bump, scott?

kudos to the people who showed up and expressed support for this.

This sounds fantastic and would be a great addition to this area.

are
Reply to  Paul Tay

It’s amazing how this section will be transformed from zero bike friendliness to a major artery with just some simple re-striping.

Went to the meeting, and must say that there’s a lot of enthusiasm for this project. PBOT did a great job with their presentation, and were good at listening to the concerns about the engineering. One woman recounted the history of this corridor, saying that the community has been waiting for improvements to safety through this corridor since 1972!

This is fantastic! I cross that street once or twice a day, and it’s a gamble with my life every time.

there is absolutely no reason they could not stripe a lane all the way to 39th. and its a tragedy that the division redesign from 7th to 39th did not include a bike lane. i bike division far more than i bike clinton.

Wouldn’t that remove on-street parking from 39th to 50th? I’d be hesitant to remove parking in an emerging business district.

Correct. Division east of 60th is 4 lanes and no parking. To the west it is two lanes with parking both sides, except at a couple busy intersections.

sorry but 39th to 50th is not twenty third or the pearl. and its about time that pdx started metering side streets and permitting neighborhoods.

You’re not, like, 12 years old are you? What about everyone else?

i find it amusing that you complain about “everyone else” and then accuse me of being a 12 year old.

This is great news! and I agree: the project needs to extend in both directions from the 60th/80th nexus. But this is an excellent start– much needed and appreciated.

Great to hear. I was just biking on Division today from the 205 path west and when the bike lane ends, it gets a bit hairy, so much so that I turned off of Division and (my fault) ended up on 72nd Ave right the side of Tabor as I tried to cut over to get to 60th. Would have been much nicer to take Division to 60th instead.

Great news. Glad this moved forward in such a timely (not that hassled) fashion.
Hopefully these good vibes can rub off on the restriping/streetscape project on Foster!

OMT! Finally PBoT et al …. is starting to chip away at the EW arterials … since all the low hanging fruit have been canned and made into jam. Good by 1940s arterials hello 2000. [Buy that house or business along Division now before prices go up once right sizing is done right.]

Yes, because Division is already so cheap……. 🙂

Excellent news! And the project starts THIS summer? That’s fast. I’ll be one of the first to ride it when it’s done.

Once we’re done with the streets on the High Crash Corridor list, I hope we get around to doing this on Hawthorne. Its 9.5′ travel lanes are below the minimum standard anyway.

Kudos to the neighborhood associations and neighbors for not giving up! Will make this area so much different and accessible.